Who is this child? That is the question. 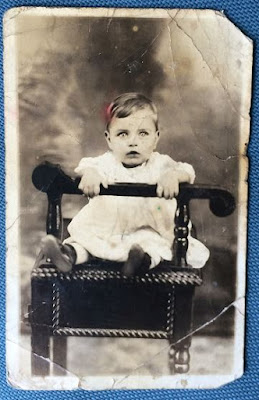 Last year, my husband visited his Aunt Jean Murphy in West Virginia and while there, she gave him this real photo postcard. Unfortunately, she said she didn’t know who the baby was in the photo, which was taken at Brinkmier’s Art Lobby on 1414 Market Street in Wheeling, West Virginia. The postcard is clipped on one corner, bent on the other three corners, has a large “18” written on the back, and is browned and stained. It’s definitely seen better days. But the photo of the baby is beautiful. One corner of the baby’s hair looks pink so you might think there’s a bow there, but it’s just a stain.

I’m always on a quest to identify unnamed photos so when I came across this photo recently, I started thinking about who this baby might be. Aunt Jean was married to Ralph Murphy, my father-in-law Earl’s oldest brother. Their mother, Dessie Church, died in 1940 when Earl was just 12 years old. Their father, Charles Homer Murphy, who was in ill health and I’m told an alcoholic, died in 1949. Uncle Ralph basically became the father figure of the family and most likely ended up with many of his parent’s possessions. Thinking along those lines, I began to think the photo might be Uncle Ralph so I pulled out a younger picture of him to compare. I decided the baby wasn’t Ralph though, his hair was too wavy.

Then I remembered another photo from the Murphy family photo collection—a baby sitting in Charles and Dessie’s lap. When Earl gave us a copy of this photo, he told us that he was the baby in this photo.


To me, it looks like the same baby when I see a side-by-side comparison of the two photos. The hair is very similar--parted and combed the same way. I asked one of my husband’s Murphy cousins what she thought and her response was “Strong resemblance, but there has always been a difference of opinion as to which of the five kids is in that family portrait. More “votes” for Earl than the others.”


What do you think? Same baby or not? I’d love to hear from others on this one.
Posted by Denise at 10:46 AM