Last weekend, I pulled out a large box of papers that came into our possession after the death of my mother-in-law. Busy with everything else in life, I sat the box aside without looking to see what was inside. Finally, after way too many years have passed, I opened the box and looked inside. Wow! It was full of genealogical treasures—obituaries, funeral cards, a few photos, school papers, letters, greeting cards, birth records, death records, etc. Lots of historical documents to keep a family historian happy for a long time.

Two items in the box caught my attention because of their age—postcards mailed to Helen Margaret Smith, my husband’s grand aunt. Now what is a grand aunt you ask? I didn’t know either so had to google it. Per Reference*, “a grand-aunt or grand-uncle is the sibling of your grandparent, while great-aunts and great-uncles are further removed. However, “grand” and “great” are often used interchangeably.” Helen’s sister was Bertha Edna Smith, my husband’s grandmother.

The first card is dated June 10, 1909 and is postmarked from Bethlehem, Pennsylvania. Helen lived in Paulton, Westmoreland County, Pennsylvania at the time. Postage to mail the card was one cent. There is no message written on the postcard–just the word “Auntie.” The image on the front is labeled “Canal Scene, Bethlehem, PA.” Unfortunately, I don’t know which aunt might have sent the card. The card has slight damage around the edges but it otherwise in good condition. 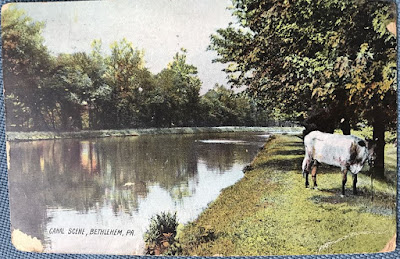 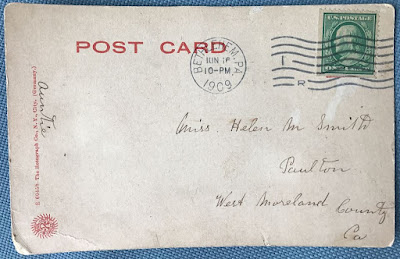 The second card is dated November 9, 1911 and is postmarked from Wilkinsburg, Pennsylvania, a borough in Allegheny County, nine miles from Pittsburgh. Helen still lived in Paulton when she received this card. The message written on the card is “Am attending a Luther League Convention in St. Stephens Lutheran Church of E. E. Pitts” and is signed “Lovingly, E.C.H.” Again, I don’t know who sent the postcard but do know that Helen’s mother’s maiden name was Horne so it could be a member of that family. It was obviously someone close since it was signed “Lovingly.” The image on the front is labeled “Drive to Stanton Avenue, Highland Park, Pittsburgh, Pa.” This card has slightly more damage around the edges but like the 1909 card, is otherwise in good condition. 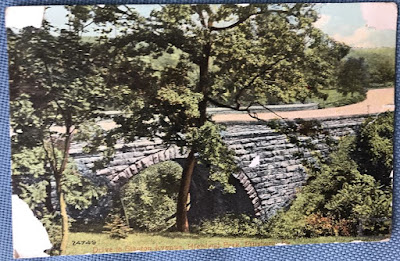 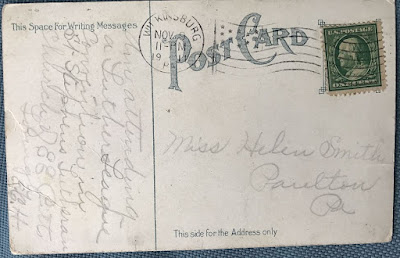 I was curious about the Luther league so searched Newspapers.com and found the following article published by The Pittsburgh Press on November 5, 1911:


The thirty-ninth semi-annual convention of the Pittsburgh district, Luther league will be held Thursday in St. Stephen’s Lutheran church, Hamilton and Brushton aves. In the morning Miss Gertrude Dunmire of Monongahela City, will speak on “How to Make Our Committees More Efficient.” In the afternoon addresses will be made by Rev. J. G. Reinartz, of East Liverpool, O., and E. F. Daume, of this city. K. J. F. Wilharm will render a report of the State Luthern league convention, recently held in Easton. In the evening, Rev. W. F. Kennerly, of Alliance, O., will speak on “The Cost of the Kingdom.” There are over 2,000 members of the Pittsburgh district League. C. W. H. Hess is president; Rev. H. B. Ernest vice president, Miss Margaret Strohecker secretary, and O. W. A. Oetting, treasurer.

The article doesn’t tell me much but it was nice to connect it to the message written on the postcard.

I blogged about Helen on December 10, 2014. She was just a teenager when she died on March 18, 1913 after suffering from endocarditis, an inflammation of the inner layer of the heart per Wikipedia. A beautiful young woman taken too soon.