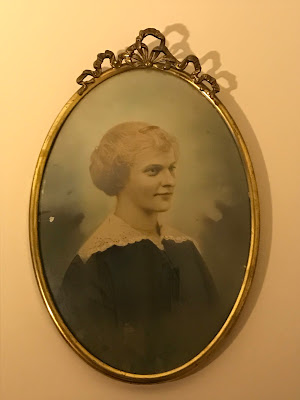 In early 1989, we were helping my in-laws clean out the attic of their Manassas house in preparation of them putting it on the market. Among the items stored in the attic was this vintage picture of Bertha Edna Smith, my husband’s maternal grandmother. Bertha was born in Paulton, Westmoreland County, Pennsylvania on January 24, 1898. I estimate she was 20 years old in this picture which would make it circa 1918. I never knew Bertha—she died in April 1979, a month after I met my husband—so this was my introduction to her. Now after working on the Smith family line for 20 years, I feel like I’ve always known her.

The frame is oval metal with a ribbon design at the top and is 13” x 18”. It has clear convex (bubble) glass covering the picture. When we found the picture in the attic, the bubble glass was broken and half of it was missing. The picture, which is charcoal—if you touch it, charcoal rubs off on your finger—has slight damage. There are several small spots on it where the charcoal is missing. I know the largest spot is where black tape held the broken glass to the frame. When we pulled the tape off, part of the picture stayed on the tape. The frame itself is in good condition. The picture was stored in a cardboard box filled with crumpled newspapers. I remember looking at my mother-in-law that day and told her I was taking it home with me. She said that was okay with her which surprised me. She held her treasures close back then and didn’t give things like that away. I took the picture home and promptly took it upstairs to our bedroom out of the way for safe keeping.

Several years after we took possession of the picture, I took it to a local photographer/framer and asked him to make a copy. That was before it was easy to do yourself. I asked that the copy be the same size as the original but unfortunately, that’s not what he did. The copy was huge. I like to say it was the size you would see hanging in the White House. I told him that was not what I ordered and refused to take the copy home. I don’t remember why I wanted a copy made unless it was to give to another family member. But our family all had small houses and none of us would have been able to display a picture of that size. So now he was stuck with the picture. I guess he didn’t know what else to do so he displayed it in the window of his store. Sometime later, my mother-in-law’s brother and his wife were visiting and she took them to the store to show them the picture in the window. By the time they left the store, Uncle John owned the picture, and he was thrilled.

The fall of 2006, I finally decided to invest in new bubble glass for the frame so we could hang it downstairs for all to see and enjoy. I decided to surprise my husband and give it to him for Christmas that year. The bubble glass had to be special ordered and cost $300 but I figured it was worth it. He was surprised and thrilled with it when he opened the gift on Christmas Day. After we finished opening gifts at our house, we packed up and made the hour drive to my in-laws house to spend Christmas Day with them. It turned out to be one of the worst days of my life. My mother-in-law was in the final stages of emphysema and we knew when we arrived at their house that she was in bad shape. She was in bed so I spent a long time sitting in the bedroom with her. We talked when she could and held hands when she couldn’t do anything else. She wasn’t up to eating Christmas dinner but was finally able to come and sit in the living room while we attempted to celebrate the day. At times, she hallucinated—talking to presidents from the 1800s at one point. We finally showed her the newly framed picture of her mother. Even in her state, she immediately knew who it was. I remember her face lighting up, her smiling, and then I heard a long ‘awwwww’ as she looked at the picture. Christmas Day turned out to be her last full day on Earth—she passed away sometime after midnight. I was so thankful that we took the picture with us that day so she could see it.

The picture hangs in our living room today and is definitely a family treasure.
Posted by Denise at 8:59 PM