About 1908, Willie and his family attended the Henry Jones family reunion in Walton County. He is number 20, sitting in front of my grandmother, Floria Mae Burnette, who is number 17. 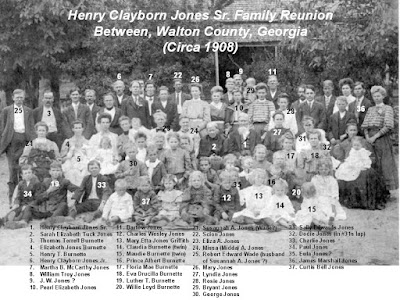 They took advantage of a photographer being available and took an individual family photo that day.


On April 28, 1910, Willie and his family lived in Greshamville, Greene County, Georgia. His father was a farmer. The enumerator recorded his mother as having had 10 children, 8 of which were living. She had lost a set of twins—one I know was a boy named Jesse. Unfortunately, I don’t know the sex of the other child who had already died by the time the census record was taken. Willie was attending school at the time the enumerator recorded the family.

By February 13, 1920, Willie’s family had moved to the Walkers District of Greene County. His father was farming on a general farm; his mother was enumerated as Lizzie. There were 10 children living in the home. Willie’s paternal grandfather, Samuel Pride Burnette, a 78 year old widower, had left his home in Walton County and moved into the home after the death of Willie’s grandmother Millicent Virginia (Jinnie) Overton Burnette. Willie’s brother Luther and his wife Etta Belle lived next door. Willie was no longer attending school but was able to read and write. At 18 years of age, he was needed on the farm. The census enumerator recorded him as a laborer on a home farm.

Willie married Beulah Odell Jones, daughter of James Darlyn Jones and Josephine F. Webb about 1924. He and Beulah were second cousins. Together Willie and Beulah had four children—Lillian B. Burnette, William Larry Burnette, Katy Odelle Burnette, and Mary Virginia Burnette. I haven’t found a marriage record for Willie and Beulah yet, so have assumed they married in late summer 1924 based on the birth of their daughter Lillian who was born in Greensboro, Greene County, Georgia on April 27, 1925. Their son William was born about 1928. Daughter Katy was born the following year—on October 6, 1929.

By April 2, 1930, Willie, Beulah, and their three children had moved to the Brook District of Walton County, Georgia. Willie was a farmer on a general farm now. The census record shows that he had not served in the military. Two of his paternal aunts lived three doors away—Frances Burnette Guthrie and her family and her sister Mattie Burnette who lived with the Guthrie’s. Willie and Beulah were still living in Walton County (Between) when their daughter Virginia was born on February 18, 1933. I wonder if Virginia was named after Willie’s grandmother, Virginia Overton. By 1935, Willie and his family had moved to the Walkers District of Greene County, perhaps to be close to his aging parents.

Willie’s father Thomas died at the age of 71 in Greensboro on February 6, 1940. He was buried at Walker United Methodist Church Cemetery there in Greensboro. His death certificate listed the cause of death as chronic myocarditis, an inflammation of heart muscle. On April 28, 1940, Willie and his family lived on Veazy Road in the Walkers District of Greene County. Their home was seven houses away from his mother’s home. Willie was a laborer on a farm. He reported that he had worked the full year in 1939.

Willie died at the Walton County Hospital in Monroe, Walton County, Georgia on November 1, 1974 following a brief illness. His funeral was held on November 3 at New Hope United Methodist Church in Between with Rev. Charles Bolling officiating. Willie was buried in the church cemetery following the service with his grandsons serving as pallbearers. At the time of his death, Willie had 14 grandchildren and 13 great-grandchildren. Willie’s wife and daughter Katy Odell Burnette, along with her husband Edward E. Earnest Sr. were eventually buried in a family plot with Willie at New Hope.


Willie’s obituary noted that he was a farmer and paint contractor.