“We’re related to many of the people buried here although I don’t know how” is what Daddy once told me as we walked through Bairdstown Cemetery, a small well-kept cemetery located in Bairdstown, Oglethorpe County, Georgia. Bairdstown Cemetery is the final resting place of my paternal grandparents, several family members, and many Lankford’s in my tree but not in our immediate family. I remember looking at all the stones when we visited, wondering who these people were and how we were connected. Several years ago, I thought it would be interesting to connect the dots. This blog post is about one of those connections.

Sarah Elizabeth Davison, daughter of Joseph Davison and Susan C. Briscoe, was born on October 16, 1882 in Georgia (possibly Greene County where her parents lived in 1880). She was the third child of five—Mary Daisy Davison, Joseph Briscoe Davison, Sarah Elizabeth Davison, Ralph C. Davison, and Evelyn C. Davison. She went by Bessie. A relationship calculator tells me that she and I are 3rd cousins, 3x removed with our nearest common relatives being my 5th great-grandparents Robert L. Hobbs Sr. (1754–1845) and Mary Marion Caldwell (1759–1853).

When Bessie was four years old, her older sister Daisy died on May 4, 1887 of dysentery in Woodville, Greene County, Georgia. The Atlanta Constitution reported her death that same day:


Death of Miss Daisie Davison. Woodville, Ga., May 4.—[Special—Colonel and Mrs. James Davison lost their elder daughter, Miss Daisy, aged about thirteen years this morning, at 4 o’clock, with dysentery. The funeral services will take place at their residence tomorrow at 9 o’clock, conducted by Rev. M. W. Arnold, of Harwood, Ga., after which her remains will be taken to Bairdstown, Ga., for interment.

Just eight days after Daisy’s death, Bessie’s father, who also suffered from dysentery, died on May 12, 1887 in Woodville. The Atlanta Constitution reported his death on May 14:


Death of Colonel Davison. Woodville, Ga., May 13.—[Special.]—Colo. Joseph Davison, our efficient railroad and express agent and post master, breathed his last at his residence yesterday at 12 o’clock, after a short and serious attack of dysentery. He was in his forty-seventh year, and was one of the best citizens and highly respected by all who knew him.

Both Daisy and Joseph were buried at Bairdstown Cemetery.

Happier times came 13 years later when on February 20, 1900, Bessie was one of four bridesmaids in her brother Joseph’s wedding to Julia Young which took place in Woodville. The wedding was deemed “One of the prettiest weddings of the season …” by The Atlanta Constitution. The bridesmaids wore organdy dresses and carried lilies and maidenhair ferns. On June 5, 1900, Bessie, her mother, brother Ralph, and sister Evelyn were still living in Woodville. There was a 21-year-old female school teacher named Hattie H. Thomas living in the home with them. Bessie, Ralph, and Evelyn were all attending school. Her mother’s occupation was listed as “Capitalist.” On May 16, 1901, 14 years after the death of her father, Bessie’s mother married Peyton W. Douglas in Greene County. After the wedding, the family apparently moved to Atlanta, Fulton County, Georgia. In 1907, they lived at 562 Washington Street in Atlanta. Bessie was a music teacher. On September 3, 1908, Bessie attended the wedding of her cousin Dr. Thomas Callahan Davison to Laura Rutledge where she played Mendelssohn’s wedding march during the ceremony. Bessie wore a white point de esprit evergreen silk dress that day.

On April 19, 1910, Bessie was still living at the Washington Street house in Atlanta with her mother Susan, stepfather Peyton, and sister Evelyn. Susan and Peyton had been married for seven years, the second marriage for both. Peyton, a retired physician, was 69 years old. Susan, age 55, was retired as well. Bessie and Evelyn were both enumerated as music teachers.

Bessie and Evelyn were often written about in the social columns. On July 14, 1910, The Atlanta Constitution wrote:

And on August 21, 1910, The Atlanta Constitution wrote about a party held at the Washington Street house:

On January 24, 1912, Bessie was her sister’s maid of honor when she married Ben Hill Cocroft in Fulton County, Georgia. The Atlanta Constitution reported the event on January 25, 1912:


Davison-Cocroft. An interesting wedding of yesterday afternoon was that of Miss Evelyn Capers Davison and Mr. Ben Hill Cocroft, of Thomasville, which took place at the home of the bride’s parents, Dr. and Mrs. Peyton Wade Douglas, at 3 o’clock. The home was prettily decorated with palms, ferns, pink roses and pink carnations. Miss Ellen Davison, of Cox college, played the wedding music, accompanied by Mrs. L. H. Fitzpatrick on the violin. Before the entrance of the bridal party Mrs. C. C. Cocroft, of Thomasville, sang “Because God Made Thee Mine,” and during the ceremony the “Angels Serenade” was softly played. Miss Bessie Davison was her sister’s maid of honor and Miss Nell Cocroft, of Thomasville, was the only bridesmaid. Mr. J. B. Bruden, of Mt. Vernon, was Mr. Cocroft’s best man and Mr. S. M. Bowden, of Macon, was groomsman. Little Misses Dorothy Launceford and Frances Wynne were flower girls. Dr. G. A. Nunnally, of Rome, uncle of the bride, was the officiating minister. The bride was becomingly gowned in a traveling suit of dark blue cloth with hat to match and carried a shower bouquet of bride roses and valley lilies. The maid of honor wore white crepe de chine and carried pink roses. The bridesmaid wore pink crepe de chine and carried white roses. The bride’s mother wore a gray satin gown with touches of heliotrope and wore a corsage bouquet of Parma violets. Mrs. C. C. Cocroft, of Thomasville, wore a gown of black velvet. Among the out-of-town guests were Dr. and Mrs. G. A. Nunnally, of Rome; Col. W. J. Nunnally of Rome; Mr. and Mrs. C. C. Cocroft, Miss Mary Cocroft, of Thomasville; Mr. J. D. Bruden, of Macon; Mr. and Mrs. E. P. Roane, of Monroe, and Mr. S. M. Bowden, of Macon. Mr. and Mrs. Cocroft left for a trip to Florida, and after February 4 will be at home in Thomasville, Ga.

Bessie’s 36-year-old brother Joseph died on October 15, 1913. He was buried in the family plot at Bairdstown Cemetery. His 36-year-old wife Julia (Young) Davison died less than two years later in Oglethorpe County // NOTE after I published this post -- Julia died in Atlanta, not Oglethorpe County // on July 22, 1915. She was buried beside her husband at Bairdstown Cemetery.


Bessie lived at the Washington Street house in Atlanta and remained a music teacher until at least 1919. By January 8, 1920, she was living with a widowed woman named Mrs. S. F. Luidler in the Rochelle District of Wilcox County, Georgia and still teaching music.

Thanks to the Miami, Dade County, Florida city directories, I’m able to track Bessie through a good part of the next two decades. In 1924, she was listed twice—once at 256 NE 20th Terrace and then at 227 NE 3rd Street. The second listing on 3rd Street noted that she worked in real estate. Her sister Evelyn and her husband Ben lived at the 20th Terrace address. She may have worked for the Cocroft Realty Company located at 416 First National Bank Building which I assume belonged to her sister and brother-in-law. Bessie was working for a real estate company located at 806 Professional Building in Miami in 1926. She lived at 1770 NE 4th Avenue in 1927 and still lived there in 1928 and 1929. It appears that her sister and brother-in-law Ben lived there as well. Both Bessie and Ben were still working real estate. 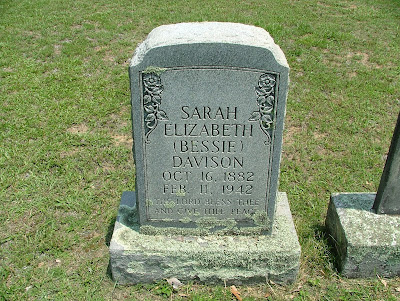 On April 21, 1930, Bessie and her mother were living with Evelyn and Ben at 1770 NE 4th Avenue in Miami. At age 46, Bessie was not working, nor was her mother or sister. Ben was still a real estate realtor. They pretty much stayed on NE 4th Avenue until at least 1939. Bessie’s mother Susan died in Miami on November 23, 1937. Bessie and Evelyn took her body home to be buried in the family plot at Bairdstown Cemetery.

I can’t find Bessie in the 1940 census but the 1941 Miami city directory shows that she had ventured out on her own and lived at 1779 NE 2nd Court, apartment 18. Evelyn and Ben were still living in the NE 4th Avenue home. By 1942, Bessie had moved to 334 NE 26th Street but not for long. She died in Miami on February 11, 1942. Her body was returned home to Georgia and buried in the family plot at Bairdstown Cemetery. Her stone was inscribed with the words “The Lord Bless Thee and Give Thee Peace.” Bessie never married.
Posted by Denise at 8:35 PM