Jessie Pope Mullins, daughter of Benjamin Hill Mullins and Minnie Dennis, was born on February 10, 1893 in Georgia, most likely Greene County. She had eight siblings—Joseph Mullins, Earl Mullins, Henry Mullins, Mamie Mullins, Thomas Mullins, Russell Mullins, Samuel Edwin Mullins, and one unknown. She went by Pope and was the wife of my 1st great grand uncle. We have no common relative although we do have a connection—Jessie’s father was the brother of Anna Josephine Mullins who married Lemuel Lawrence Callaway Jr. Lemuel’s brother was Robert Dawson Callaway, who married my great-grandmother Alice Beman Lankford.

On June 4, 1900, Pope and her family lived in Woodville, Greene County, Georgia. She was enumerated as Popie, born May 1893. Pope’s parents had been married for 15 years. Her father Benjamin was a farmer. Her mother Minnie was enumerated as having seven children, all of which were living. Pope and her three older brothers were all in school. They lived four houses from Homer and Leslie Lankford. Homer was Alice Beman Lankford’s brother.

The Mullins family left Woodville at some point and moved to Penfield, Greene County, Georgia, less than five miles away. This is where the census taker found them on April 20, 1910, living on Sanders Street. Pope’s father was a farmer on a general farm. Brother Henry and Pope (again enumerated as Popie) were both working in a hosiery mill. Henry was a presser and Pope a looper. Her 13-year-old brother Tom was working odd jobs on the home farm. The 1910 census record shows that Pope’s mother had two more children since the 1900 census was taken—a boy they named Edwin and an unknown child that was no longer living. This is the only record I’ve found for this child at this point. Vince and Maude Langford, another brother of Alice Beman Lankford, lived two doors from the Mullins family. Living next door on the other side of the Mullins house was Martha Nicholson and next door to Martha was Susie Wilson, another connection to my Lankford family. Susie was the widow of Walter S. Wilson Sr., son of Emma S. Lankford, who was the daughter of James M. Lankford and Caroline Hobbs, my 3rd great grandparents. Martha was Susie’s mother.

Here’s another case of Lankford vs. Langford. When Pope married Oliver, his last name was spelled with a “k” on their marriage certificate—Lankford. When the census enumerator visited on January 6, 1920, his last name was spelled with a “g” on the census record—Langford. As far as I can tell, they used Langford for the rest of their lives. Now back to the 1920 census record—Pope, Oliver, and their four children, ranging in age from 8 years to 11 months, lived on Hoyt Street in Athens, Clarke County, Georgia on January 6. Oliver was an automobile machinist. About 1927, Jessie and Oliver moved to Atlanta, Fulton County, Georgia where they lived at 54 Linden Avenue NW. Today that would be near the Fox Theatre and The Varsity if you know that area of Atlanta. In 1928, the Atlanta City Directory recorded her as Hope. Pope and Oliver were still living on Linden Avenue in 1929 although they had moved to 76 W. Linden Street.

The year 1929 would turn tragic for the Langford family when Pope died suddenly on February 18 at Georgia Baptist Hospital in Atlanta of a self-inflicted razor wound to the neck. Pope’s death certificate noted that she was mentally deranged at the time of her death, and in fact, had a history of mental illness. A local newspaper, The Atlanta Georgian, noted that “This is one of the saddest deaths that has effected many loved ones and friends in Greene County in many years. The deceased comes from one of the best families in the county, and as a young girl, at Penfield, she was loved and respected by all who knew her. It is believed by all who know Mrs. Langford and her family, that her health was impaired to an extent that she was not really responsible for what she did and the rash act of taking her life was caused from conditions that made her irresponsible.” A police investigation found that Pope’s mental health issues caused the actions leading to her death. She had apparently been arrested for shoplifting in December 1928 and was placed on probation after pleading guilty to the charges. Pope violated her probation on February 18 when she was again caught shoplifting and arrested. Realizing Pope had five children, the policemen assigned to her case took her home before going to the police station so she could cook dinner for her family. They waited outside while Pope went inside the house. After what they felt was too much time inside, the policemen sent Pope’s daughter Elaine to find out what was taking so long. Once inside, Elaine found her mother laying on the floor in what must have been a pool of blood. Elaine screamed and the police went inside the house and quickly realized that Pope had slashed her throat. How traumatic that must have been for 13-year-old Elaine! They called an ambulance but Pope died on the way to Georgia Baptist Hospital. The newspaper report didn’t mention whether the other four children were in the home at the time but I imagine they must have been. Pope’s body was taken to the Sam Greenberg and Company mortuary located at 95 Forrest Avenue NE in Atlanta (I believe Forrest Avenue is now named Ralph McGill Boulevard) and later transported to Penfield. She was buried at Penfield Cemetery following a service at Penfield Baptist Church. Pope was survived by her husband Oliver, five children (Whitty, Oliver, Albert, Elaine, and Ralph), parents Ben and Minnie, sister Mamie, and brothers Joseph, Henry, Russell, and Benjamin. 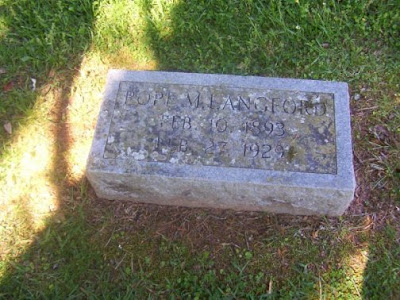 Pope’s stone at Penfield Cemetery shows a death date of February 27, however, according to her death certificate, it was Monday, February 18. Her death certificate notes her date of burial as February 19, however, the news article dated February 22 detailing her death notes that her funeral was held Wednesday, which would have been February 20. A February 20 article published by the Atlanta Constitution, notes that her remains were taken to Penfield for funeral services and interment on Tuesday afternoon which would have been February 19. The article doesn’t specify that she was buried on February 19 though.

Whatever the case, it’s all very sad considering the fact that Pope was only 37 years old and left five young children behind.
Posted by Denise at 9:18 PM