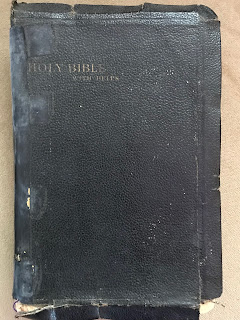 The theme for 52 Ancestors this week is “favorite name,” but unless I get creative (which I’m not), this blog post won’t have anything to do with the theme. Mary Athya Murphy was my mother-in-law. Today would have been her 89th birthday, so instead of writing about a favorite name, I want to remember her by writing about a family treasure she left behind—her Bible.

Mary’s maternal lines are from Apollo, Armstrong County, Pennsylvania. Her brothers John, Howard, and James (Jim) were all born there. Mary’s family lived in Westmoreland County in 1929 when she was born but they moved back to Apollo before Jim’s birth in 1930. 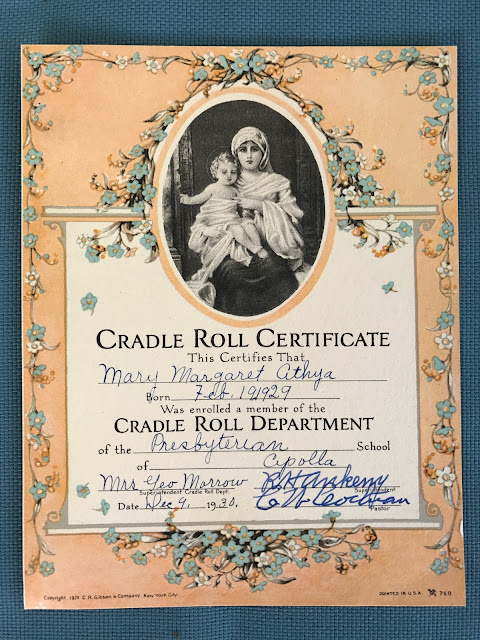 This Bible came into our possession after the death of my father-in-law, Earl Murphy, in 2015. When you open the Bible, you see that Mary wrote “Brothers – Matt 13:55, 56” in the bottom left corner of the back side of the title page. Turn to the page in the Bible that contains Matthew 13:55, 56 and you see that she again wrote “Brothers” at the top of that page. She also marked verses 55 – 56 with a large bracket. I have no idea what these verses meant to her but she must have had a reason for marking them. On the pages containing Matthew 3, 4, and 5, she left a small piece of paper between the pages with the word “First” written on it. 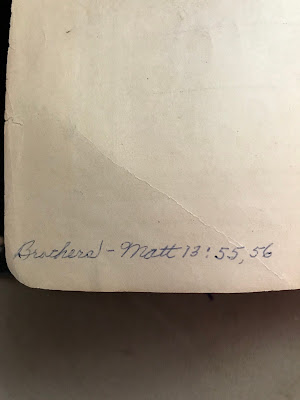 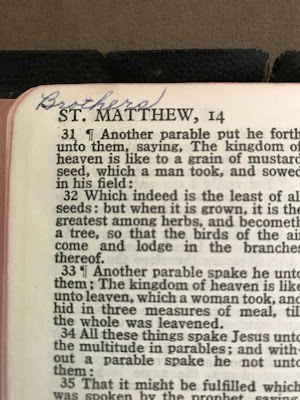 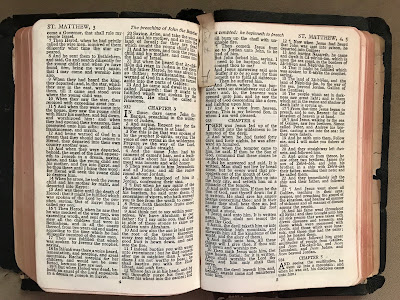 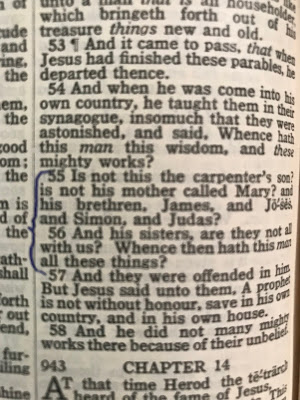 The writing on the piece of paper doesn’t look like her writing though. Mary had nearly perfect penmanship, as you can see from the poem “Now—Time Cannot Wait” that she wrote on the back cover page of the Bible. 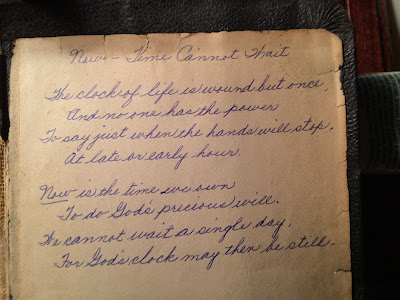 Mary had beautiful cursive handwriting. She had that perfect slant, leaning towards the right. Like me, she was left-handed and I can tell you right now, I could never write that well. Sometimes I can’t read my own handwriting! In 1943, Mary received a certificate for “… proficiency in Writing” from the Peterson School of Penmanship. Unlike today, I guess penmanship was a serious subject at the time. 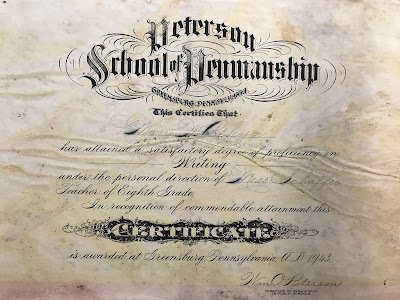 The exterior of Mary’s Bible is in poor condition. The edges are torn, the spine has pulled away from the bound pages, and it’s taped together by black electrical tape. The inside pages are still in good condition however. The writing on the title page is clearly marked and easy to read so there is no question as to who the Bible belonged to and where it came from. Unfortunately, they incorrectly recorded her birth date as February 19. They were off by 10 days since it was actually February 9. 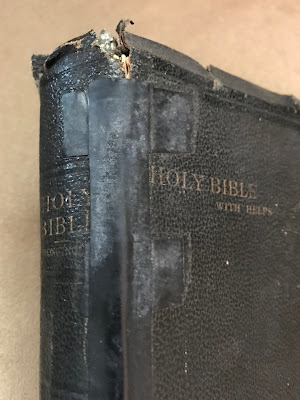 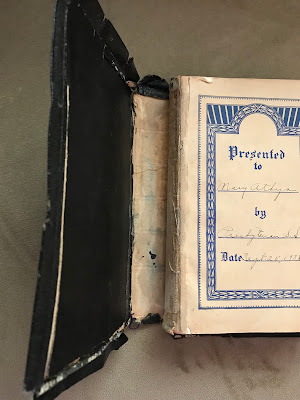 We used Mary’s Bible at Earl’s graveside service in 2015. One of her granddaughter’s read the poem “Now” that was written on the back cover. Another granddaughter read the 23rd Psalm from the Bible. I felt it was a nice way to include Mary in the service.

Happy birthday in Heaven Mom. I hope you're munching on a box of Whitman's Samplers!
Posted by Denise at 8:06 PM