Maude Maree Shields -- In the census 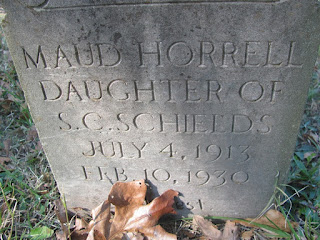 Can you believe everything you see “in the census?” That’s a question I’ve asked myself as I research Maude Maree Shields. Maude died young, at age 16, possibly during childbirth. Since she was so young when she died, you would think her life would be easy to figure out, but I’m stumped. I thought I had her life timeline under control until I found a Maude Harrell (her married name) in the 1930 census. That’s when I discovered a big problem.

On January 3, 1920, Maude and her family lived on Lower Varnell Road in the Varnell District of Whitfield County. Of the 10 children born to this family, 6 were living at home the day the census enumerator visited. Maude was the youngest at age six. Her father was a farmer; her brother Walter was a laborer on the farm, presumably helping her father.

It appears that 16-year-old Maude married a young man named Brown Harrell in Gordon County, Georgia on August 15, 1929. Nineteen-year-old Brown was the son of Frank and Vida (or Lydia) Harrell. 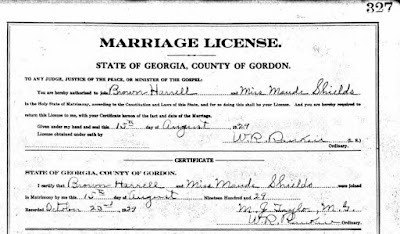 Here’s my problem—if you go by the death date on Maude’s headstone at Grove Level Community Cemetery in Dalton, Whitfield County, Georgia, she was already dead when the census enumerator visited on April 7. Her tombstone records her date of death as February 10, 1930. On one hand you might think, well, maybe that’s not Maude buried there but the inscription on the headstone tells you otherwise:

That and the fact that she’s buried beside her parents and sister Pearl Shields Hester.

The age for the Maude in the 1930 census record is 16 which is in line with a birth year of about 1913. This Maude was also born in Georgia and both of her parents were born in Tennessee, same as Maude Maree Shields.

I expected to find a death certificate for Maude in the Georgia Archives “Georgia Non-Indexed Death Certificates” collection but have had no luck so far. There is a 1930 death certificate for a Maude Harrell but this person was born in 1905, was black, and died on December 7, 1930 in Tifton, Tift County, Georgia so it’s not her. The North Georgia Historic Newspapers Archive includes the North Georgia Citizen from Dalton but only through the year 1921. I look forward to the day when that newspaper archive is extended to 1930 since it’s possible there would have been an obituary published for Maude in that newspaper.