The 52 Ancestors theme this week is “heirloom” so I’d like to tell you about a water pitcher that was given to me in the late 1990s by my mother-in-law, Mary Athya Murphy. Mary held on tightly to her belongings so it was a surprise when she gave it to me. I had been researching her Smith family, which she had said would be impossible to figure out because they had such a common name. Fortunately, her ancestor named her first three children with “E” names—Electra, Erastus, and Eunice. This made it very easy to research this family! After I’d spent a year or so working on this line, I began to feel like I knew the Smith family. I’m sure many of you feel the same way about the ancestors you spend so much time researching.

Mary kept Electra’s water pitcher on top of the organ in their living room. At the time, it was filled with cattails and other dried flowers. On one visit to their house, I shared with Mary my feelings about the Smith family and told her I’d love to have Electra’s water pitcher if she was ever ready to give it up. It didn’t happen immediately, but one day as we were saying our goodbyes, she gave it to me. I promised Mary I’d take good care of it for her.

This water pitcher originally belonged to Electra B. Smith, Mary’s grand aunt. Electra, the daughter of John Thompson Smith and Jane Gordon, was born in Armstrong County, Pennsylvania (probably Apollo) on February 11, 1841. Electra and her husband Daniel Jack (a Civil War veteran) spent their last years living in the home of George Athya and his wife Bertha (Smith) Athya, Mary’s parents. Daniel died in the house on December 10, 1925 before Mary’s birth in 1929. Electra continued to live with George and Bertha in the house until her death on April 22, 1932. I assume that Bertha kept the pitcher after Electra’s death. Although Electra helped raised her sister’s six children, she never had children of her own. Since Electra was living with Bertha, one assumes they were close so it makes sense that Bertha would take possession of the water pitcher at that point. Bertha was living with Mary in Virginia when she died in April 22, 1979 (and I just realized as I’m writing this that both Electra and Bertha died on the same day, April 22!) so the pitcher became Bertha’s at that time. Mary kept the pitcher from 1979 until the late 1990s when she gave it to me.

Electra married Daniel Jack, the widow of her sister Eunice, in Apollo on February 20, 1896. This tells me the pitcher is at least 122 years old since the last name on the side is her maiden name “Smith,” not her married name “Jack.”

The white glazed pitcher is in good condition. It has grape leaves on both sides and underneath the spout. There is gold stenciling on the handle, around the mouth, bottom, and on the leaves. 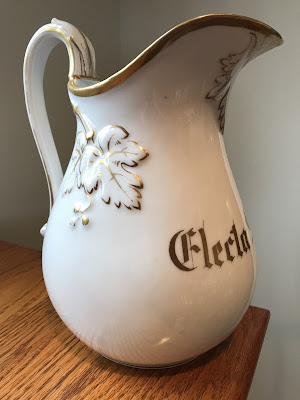 The name “Electa Smith” is also stenciled on the front. The height of the pitcher is 9 inches at the spout and 10 and a quarter inches at the handle. The base is 4 and a half inches and the bowl about 8 inches. 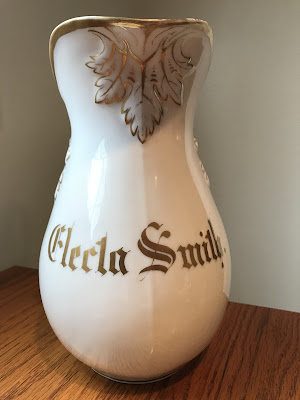 The stenciling shows some wear on the handle and spout but otherwise is in good condition. 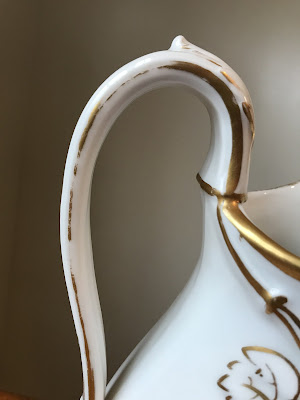 The marking on the bottom is “AF” followed by a period. There is the number 2 underneath the AF. The “A” and “F” share the same line. 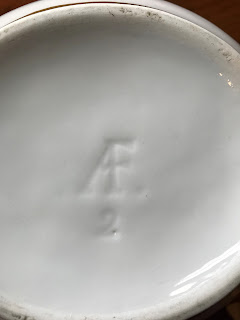 Electra’s water pitcher sits on the dresser in my bedroom so I see it every day. I often find myself reflecting on what life would have been like for Electra in the late 19th, early 20th centuries.

I plan to keep my promise to Mary and take care of this Smith family heirloom.