The 52 Ancestors theme this week is “close up.” I wasn’t sure how I wanted to tackle this one but then remembered reading a recent tweet from FamilySearch stating they had added their 2 billionth image to their free online database. I have a subscription with ancestry.com so that’s my “go to” for research but after reading the article, I decided it was time to take a “close up” look at what FamilySearch had. It didn’t take long before I found several records I hadn’t found on ancestry.com. 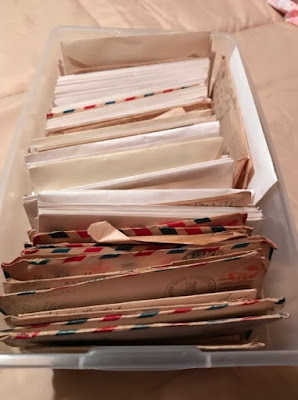 My first search was on John Henry Marston, my brother-in-law Randy’s father. I was home for 10 days last month and on my last afternoon there, Randy showed up with a box full of letters his father had written to his mother dating from 1939 – 1945. He told me he had another box just like it at home. All I could think of was “why didn’t you bring this over last weekend!” We spent a little time reading some of the letters but I was leaving town in two hours and needed to help my mother in the kitchen so couldn’t spend the time I wanted to on them. I told Randy we need to tell his parents story, something I’m determined to do. I would have loved to bring the box of letters home with me and start on that project but that wasn't happening! So, since I don’t have the letters and won’t see them again until late October, I decided to start my research on John Marston to see what I could find, especially anything related to his military career. I didn’t have much luck finding military records though, only the indexed U.S. World War II Army Enlistment Record and the U.S. Department of Veterans Affairs BIRLS Death File. Both provided details but no images. I looked for his World War II draft registration card but didn’t find it so that was the first thing I searched for on familysearch.org and it was the first thing that came up. As you can see on the image below, it provides details about John and even his father, John Sr. I also found the registration card for John’s brother-in-law, Geral Marvin Stacks, which tells me where John lived at the time.


Then I spent the next two days researching John’s family which was a lot of fun. I always learn a little history when I do that because I like to take a “close up” looks at interesting details I find. In this case, I did a deep dive into Hollywood Cemetery, an old cemetery in Atlanta which I wrote about last week.

My next search was on William Hoyt Vest. Hoyt was my granny’s last husband (she had several) and is the only husband I remember her being with. We always called him Hoyt; he was a sweet man and was good to us Lankford kids. My granny divorced Hoyt late in his life and he moved to San Diego to live with his son. I’ve never been able to find his burial location so often look when I find new records. I still didn’t find where Hoyt is buried but I did find out who his first wife was—Mary K. Wells, born December 18, 1907 in Tennessee and died on May 23, 1970 in San Diego, California.


Another discovery was that Hoyt had an infant sister that died before her first birthday—Martha Lee Vest, born in Georgia on May 1, 1927 and died in Dalton, Whitfield County, Georgia on February 15, 1928.


Neither Billie or Martha would have shown up in any census record so if not for the death records, they may have been forgotten about. I added a memorial to both infants to Ebenezer Cemetery in Find A Grave to help others find them.

These are just a few examples of the records I found from my “close up” review of FamilySearch. If you don’t have a subscription to ancestry.com, don’t let that stop you from researching your family. Head over to familysearch.org, set up a free account, and get started!
Posted by Denise at 7:54 PM