Elizabeth Ann Lankford, one of many Lankford’s buried at Bairdstown Cemetery 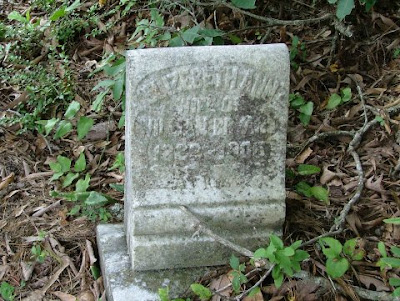 The 52 Ancestors theme this week is “large family.” For this theme, to kill two birds with one stone I chose to write about Elizabeth Ann Lankford. I’m sure if I looked, I could have found someone with a larger family than hers but I’ve been lax about my goal to document the souls buried at Bairdstown Cemetery in Bairdstown, Oglethorpe County, Georgia and this post will cover both.

Other than census records with the rest of her family, I find no other records for Elizabeth until she married William H. Bryant Sr. on December 13, 1841. She was 19 years old and he was 20. I find the records for the location of their marriage confusing though. The database “Georgia, Marriage Records from Select Counties, 1828-1978” has two different records for the location of their marriage. One from Greene County that doesn’t actually show they were married there. The section of the form where the justice of the peace is supposed to write the date they “were joined together in the Holy Bands of Matrimony, by me” was left blank.


The other is from Oglethorpe County:


Three other databases show the marriage location as Oglethorpe County:


Did they go to Greene County to get the application and then get married in Oglethorpe County? Hard to say 177 years later.

Elizabeth and William had 10 children together—Sarah T. Bryant, Samuel R. (or John) Bryant, Rebecca M. Bryant, William H. Bryant Jr., Alexander Hamilton Bryant, Charles Bryant, Martha Bryant, Eugene Herbert Bryant, Jasper M. Bryant, and Mary Bryant. For a while, I thought there were 11 children because if you go through census records you find 11 named children. But based on the fact that the 1900 census record recorded Elizabeth as having had 10 children with 9 living at the time, I’m now going with 10. I mean, she would have known how many children she’d given birth to, right? One could also argue that the census enumerator recorded the children with different names on several occasions so perhaps that was what happened here. I’m thinking Samuel and John are possibly the same child. I have found no record to prove otherwise. If someone does, I’d love to hear from them.

On August 3, 1850, Elizabeth, William, and their four children—Sarah, Samuel, Rebecca, and William—lived in the 66th Division of Oglethorpe County. The census enumerator marked the column noting that William was unable to read or write. Their home was a large farm made up of 289 acres of improved land with an additional 100 acres of unimproved land. The value of their farming equipment and machines was $2,500. Livestock consisted of 100 horses, 3 mules, 4 working oxen, 2 cows, 11 sheep, and 8 pigs, all valued at $60. Can you imagine what all that livestock would be worth today! The farm produced 400 bushels of wheat, 50 bushels of rye, 500 bushels of oats, 130 bushels of rice, 11 bales of cotton, 52 bushels of peas and beans, 100 bushels of sweet potatoes, 150 pounds of butter, and 5 tons of hay. They stayed busy. But as an overseer, I’m not sure how William was able to keep records for his large farm if he was unable to read and write.

On June 29, 1860, Elizabeth and her growing family of nine children lived in District 238 of Oglethorpe County. The enumerator spelled their last name “Briant.” He also listed a two-month-old unnamed male child in the home. Elizabeth had recently given birth to a son they named Jasper so that has to be him. William was a farmer with a personal estate valued at $300.

On June 1, 1870, Elizabeth and her family lived in Maxeys, Oglethorpe County. She was enumerated as Eliza and was keeping house. William was a farmer with land valued at $2,000 and a personal estate valued at $1,000. Their son Eugene was enumerated as Henry, Jasper enumerated as James, and Alexander as Adam. At ages 12 and 10 respectively, Eugene and Jasper were unable to read and write. Three adult children still lived at home—Sarah (age 27), Rebecca (age 23), and William Jr. (age 21). William Jr., enumerated as a farm laborer, must have been helping on the farm. William Colclough, a 19-year-old male, lived in the home and was also a farm laborer. Three William’s living in the home at the same time. That must have gotten confusing at times!

On June 29, 1880, Elizabeth and her family lived in Woodstock, Oglethorpe County. William was a farmer, managing 25 acres of land and livestock. He rented out part of the land to tenants who gave him a share of their crops for using the land. There were seven adults living in the home—Elizabeth, William, Sarah (37), Rebecca (27), Mattie (24), Herbert (22), Jasper (20), and teenager Mary (17). Herbert and Jasper were farm laborers so can we assume they helped their father on the farm? A servant named Rhoda Drake, age 16, lived in the home as well. Their son Alexander (Alex), his wife Lizzie (Epps), and two daughters (Kate and a three-month old infant) lived three houses away. In the early 1880s, Elizabeth’s son William Jr. left Georgia and headed west to Texas. In 1886, he met and married Annie Laura Jones after a short courtship. They had two children, a son named Charles Leonard Bryant in 1890, and a daughter named Mary Lee Bryant in 1892. When Mary was two months old, Laura contracted pneumonia and passed away. William Jr., unable to care for a newborn, left Mary with Laura’s mother, Fannie Catherine Findley Jones, and went home to the Bryant family farm in Maxeys with his son Charles. Years later, Charles would write that “They never lived together as a family again.” William Jr. didn’t stay home long though. He left the family farm again, this time leaving his son Charles in the care of his sister Rebecca, who apparently was still living at home. I’m assuming that this was after Elizabeth had passed away since it was Rebecca who cared for Charles.

An 1894 map of Oglethorpe County shows the Bryant farm in the Falling Creek district, near Bairdstown, just over the Greene County line.

On June 5, 1900, Elizabeth, William, and three adult children—Sarah, Rebecca, and Jasper—lived in the Falling Creek District of Maxeys, probably the one shown on the 1894 map. Elizabeth and William had been married for 58 years. This is the census record that shows Elizabeth as the mother of 10 children with 9 living and the only record I have found that shows the month she was born. At age 79, William was still farming with their son Jasper helping. Sarah and Rebecca were both dressmakers. Elizabeth’s son Eugene and his family lived three houses away.

Elizabeth died in Maxeys on November 29, 1905. She was buried in what would become the family plot at Bairdstown Cemetery. The Oglethorpe Echo reported her death on December 8, 1905:


The grim monster, death, invaded the home of Mrs. William Bryant, near here (Maxeys) Wednesday of last week and claimed her as his own. She was laid to rest in the Bairdstown cemetery Thursday following after appropriate services by Rev J. D. Mell.

You have to walk the full length of Bairdstown Cemetery to get to the Bryant family plot, located at the far-right edge by the woods. Some of Elizabeth’s large family of 12 are buried in the family plot with her and William, together forever.


Bairdstown Cemetery is a small, well-kept country cemetery. I’ve walked it many times, usually with my Daddy, and I always make a point of stopping by each of my 3rd great-grandfather’s sibling’s family plots. I’ve researched them enough that I feel like I know them now. Daddy and I have talked about all the Lankford family connections there and I’ve made it a goal to figure them out. Elizabeth Lankford Bryant is one of those connections.

I would love to walk Bairdstown Cemetery with Daddy one more time and tell him the stories I’ve learned about the souls buried there. But Daddy will be 93 later this month and is no longer able to walk the cemeteries with me. So instead, I’ll tell anyone who wants to listen here on my blog. Click here to view other connections to Bairdstown Cemetery.