He just wanted to go home!

The 52 Ancestors theme this week is “in the paper.”

Once upon a time, we had a movie projectionist in the family—my husband’s uncle Ralph Junior Murphy. In 1940, uncle Ralph lived in Littleton, Wetzel County, West Virginia with his parents and siblings Raymond, Glenn, Evelyn, and Earl. When the census enumerator asked 21-year-old Ralph for his occupation, he told him “operator” in the “show” industry. That was corroborated when I found a news article in uncle Ralph’s wallet given to my husband by his aunt Jean Murphy several years ago. Someone had written the year 1940 on the article.


Hundred Operator Had to Go so 50 Get Movie Passes
Hundred, W. Va., Feb. 17—(AP)—Fifty patrons of this community’s only movie theatre have passes for a show tonight because the operator decided a double-feature bill was “too long” and shut down the projector.

Ralph Murphy, the only available operator, closed the show 15 minutes before completion of the second film last night.

His only explanation was “too long,” so Miss Isabelle Brown, theatre manager, handed out passes to the patrons so they could see the end of the picture.


Unfortunately, I don’t know the name of the newspaper this article was published in. With the help of someone on the Wetzel County, West Virginia Genealogy Facebook page, I learned there were two newspapers in the area at the time—the Wetzel Republican and the Wetzel Democrat. My guess is it would have been published in one or the other.

Another item in uncle Ralph’s wallet was a card with just the words “Alpine Theatre Circuit #2” and “Littleton, W.Va.” typed on it. Of course, that was a clue and after a little research, along with more help of someone on the Wetzel County, West Virginia Genealogy Facebook page, I determined that the theatre was the Alpine Theatre located at 1600 Pennsylvania Avenue in Hundred, Wetzel County, West Virginia. Walter Buhl Urling of Alpine Southern Theatres opened the Alpine in the late 1930s.

Uncle Ralph was still a projectionist when he enlisted in the U.S. Army in 1941. He would later go on to be the projectionist at Warner’s Skyline Drive-In Theater in Clarksburg, Harrison County, West Virginia. You can read about that here. 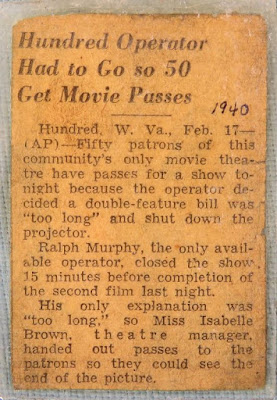