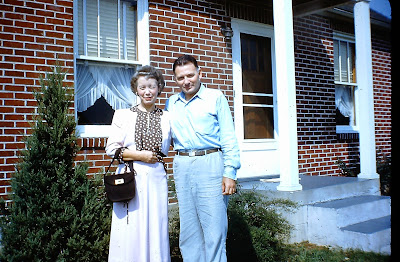 The 52 Ancestors theme this week is “brick wall.”

I had full intentions of blogging about my husband’s 2nd great grandfather, Samuel C. Murphy, but decided against it when I pulled out the notebook full of Civil War era papers I have for him. I haven’t figured out who Samuel’s parents are so our Murphy line stops when I get to him. He definitely is one of my brick walls. Since he’s my husband’s direct ancestor, I want to get it right and not rush through his timeline so I’ll save him for later. Instead, I’m writing about Ruth Miller Dudley Chapman, the woman standing in front of a brick wall beside her second husband, Charles Vernon Chapman.

On June 18, 1900, Ruth and her family lived in District 15 of Lonaconing, Allegany County, Maryland. Her father worked in the coal mines. Her maternal grandparents were both from Scotland. Ruth was baptized at a Presbyterian Church in Lonaconing on November 3, 1902. Jessie, one of the twins, passed away in 1903 and was buried at Oak Hill Cemetery in Lonaconing.

On April 25, 1910, Ruth and her family still lived in Lonanconing, now on Water Clift Street. Her father worked on a driving team, probably at the coal mines. When I looked at the men in her neighborhood, it appears that most of them worked in the coal mine at the time, although her brother John was working as a laborer on a farm. The census enumerator recorded that her mother Jessie had eight children, seven of which were living. That would account for the death of baby Jessie. The family suffered another loss when Ruth’s sister Esther passed away in 1916. She was buried beside baby sister Jessie at Oak Hill Cemetery.

On January 12, 1920, Ruth (age 20) and her family lived on Water Street in Lonaconing. Her father was a self-employed carpenter. Ruth, William, and Irwin worked at the silk mill. Ruth’s father William passed away in 1923 and was buried at Oak Hill Cemetery. Sometime between 1920 and 1923, Ruth married Joseph Dudley Jr., son of Joseph Dudley Sr. and Martha West and they moved to Bridgeport, Harrison County, West Virginia. Ruth and Joseph had three children—Bettie Lou Dudley born April 13, 1924, Leah Jo Dudley born July 7, 1926, and Florence Ann Dudley born January 30, 1928. Tragedy struck the family on October 8, 1928 when Joseph was severely wounded in a mine explosion. He died from his injuries the next day. Joseph was buried at the Bridgeport Masonic Cemetery on October 13. The explosion was no accident—his death was ruled a homicide. You can read about Joseph here. With his death, Ruth was left alone to raise their three daughters. Probably needing to be close to her family, she moved back to Lonaconing.


On April 4, 1930, Ruth and her daughters lived on Dye Road, not far from her mother’s home on Watercliff Street. Ruth supported her family working as a winder at the silk mill. Six of her siblings were still living with her mother so she had plenty of help taking care of her daughters.

On April 11, 1940, Ruth and her daughters lived with her mother, sister Verna, and brother Clarence on Watercliff Street. Ruth still worked at the silk mill. Verna was working as a teacher in a public school and Clarence worked in the printing department at Celanese Corporation. By 1945, Ruth had moved to Long Beach, California. She and daughter Bettie lived at 3933 Virginia Road and worked together at Douglas Aircraft Company in Long Beach.

Ruth and her daughters all celebrated a wedding in the late 1940s and 1950s. On June 30, 1946, Ruth traveled back to Lonaconing when her daughter Leah married Elmer Marsh. Ruth’s brother Clarence gave Leah away at the ceremony. Ruth wore a navy-blue dress with a navy-blue hat trimmed in white, and a corsage of gardenias. In 1948, Ruth married Charles Vernon Chapman, son of Granville H. Chapman and Cora C. Taylor. On January 28, 1951, her daughter Bettie married Norman Keith Glass in Las Vegas, Nevada. And daughter Bettie married John M. Lajoie on Julie 23, 1959 in Los Angeles, California.

Ruth’s family gathered every year to celebrate her mother’s birthday, a tradition they carried on even after her mother passed away in 1958. Ruth and Vernon were often the hosts of the celebration.

Her husband Vernon died on December 18, 1977 and was buried at Rest Lawn Memorial Gardens in La Vale, Allegany County, Maryland. Her daughter Bettie died in San Rafael, Marin, California on January 10, 1986 and was buried at Masonic Cemetery in Bridgeport, Harrison County, West Virginia.

Ruth passed away in Lonaconing on September 16, 2000 at the age of 101 years. She was buried beside Vernon at Restlawn Memorial Gardens in La Vale.

The photos on this post are part of my husband’s uncle Ralph J. Murphy’s slide collection. If you’d like to see more photos from Uncle Ralph’s collection, click on the links below.