The 52 Ancestors theme this week is “at worship.”

Orchard Knob Baptist Church, located at 3099 Humphries Drive, a few miles from our home on Macon Drive in Atlanta, Georgia, was the church of my childhood. We worshiped there three times a week—Sunday morning and evening, and Wednesday evening. Mama worked in the nursery while we attended Sunday School and services.

Sunday School classes were just down the hall from the nursery. Every Sunday morning, Mama put a quarter in five offering envelopes and gave each of us one to place in the offering plate that was passed around during the service. On the way to church Sunday evening, Mama stopped at a mom and pop store down the street from the church and bought candy for us—lemon drops come to mind. I wonder if it was a bribe, lol. I remember that I fell asleep during one Sunday night service—the pastor woke me up after the sermon ended and everyone else had already left the church. My sister Bonita remembers that during evening services, some of her age group sat in the back row.

The Lord’s supper was something we looked forward to. The deacons passed around a tray of little round shot glasses filled with grape juice and everyone got one, along with a small cracker. I don’t remember if I understood the meaning of the Lord’s supper but I always thought it was cool to pretend we were drinking wine.

Bonita remembers there being a lot of events for the youth of the church. One program my sister Jennifer and I took part in was the Girls Auxiliary (also known as the GAs), a program “developed to answer the call of girls interested in missionary work through the Southern Baptist Church” according to the website Vintage Kids Clubs Online Museum. I don’t remember for certain but imagine the GAs gathered on Wednesday evenings. Once a year, they held a coronation court that probably took place on a Sunday in front of the entire church congregation. I found the photo below on the Orchard Knob Baptist Church Facebook page taken in 1967 of one such court. You’ll see both myself and my sister Jennifer in the photo. I would have been 11 and Jennifer 13. She was a queen. You can see she’s wearing a crown in the photo. I was a lady-in-waiting. The same Facebook page also had a copy of the program from that court in which we’re both listed. The boys had a program called the RAs, or Royal Ambassadors.


Several years ago, I digitized Mama’s slides and discovered a photo of Jennifer and I, probably from the same coronation. You’ll see the GA emblem patch on both of our dresses in the photos below.

Bonita participated in the church choir. My brother Michael did as well, although he said it was just for a short time. He’s one of the boys in the photo below.


I was baptized at Orchard Knob. The baptismal pool was in the front of the church, up high for all to see. I imagine I was scared to death. I don’t like to be the center of attention so that probably didn’t make me happy either. I remember the pastor putting a cloth over my face before dunking me backwards into the water and then someone handing me a towel.

My sisters Bonita and Jennifer were both married at Orchard Knob. After Jennifer’s wedding, everyone went to the fellowship hall behind the church for the reception.

Orchard Knob held yearly revivals. On April 4, 1964, Rev. Randy Haman, who joined Orchard Knob on August 19, 1962, gave me a pink New Testament Bible for bringing the most guests that week. I wrote his name on the inside cover. I have another Bible from Orchard Knob that was presented to me by Mrs. Connie Rayburn on September 26, 1965. Rev. Haman signed this Bible. He made notation of Philippians 1:3 on both Bibles: I thank my God upon every remembrance of you. I consider both Bibles to be family heirlooms. 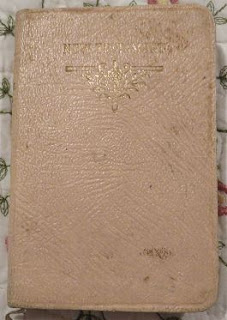 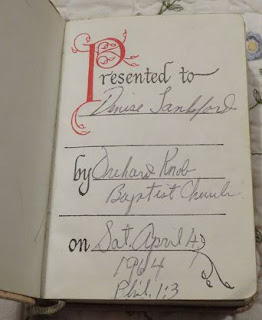 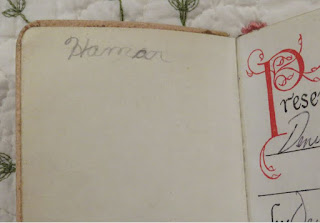 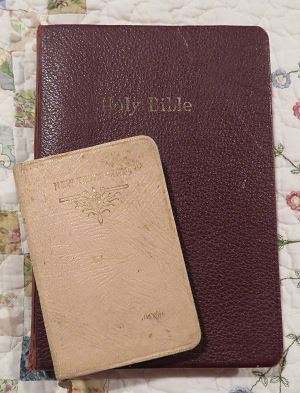 The music director, whose name I can’t recall, played a large xylophone. He often entertained the congregation by playing songs on the xylophone on Sunday nights. We looked forward to that.

Easter was a big deal because we all got new clothes for Easter Sunday. Mama worked at Hill Brothers Shoes, which eventually became Pay Less Shoes, so you know what brand of shoes we were wearing. We have several photos of Jennifer and I wearing what we call the carrot dresses. They may have been Easter dresses at one point. Bonita remembers one Easter, even though it was extremely cold the Saturday before Easter, Mama washed the car and then woke up with a bad cold Easter morning. Mama didn’t feel good but got all five of us ready, without the help of Daddy, and we went on to church, dressed in our Easter finest. She sacrificed a lot of us during those years.


Mama doesn’t remember who took the picture below but said we had to be on our way to church because the only time Michael wore a suit was to church.


As I wrote this, I wondered when Orchard Knob was established so used my historical newspaper subscription to see what I could find. The Atlanta Constitution published a news article on December 5, 1953 that stated “Tomorrow will be the 50th anniversary of Orchard Knob Baptist Church and a Golden Jubilee program is planned” so it appears to have been established in 1903. My family attended during the 1960s into the early 1970s. There’s so much I don’t remember about those years but it’s been fun to take a look back at what I do remember.