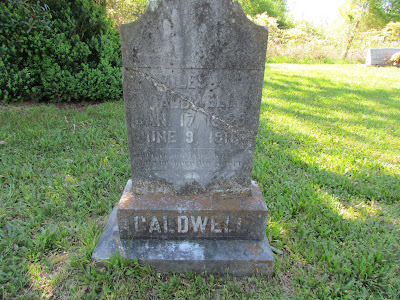 The 52 Ancestors theme this week is “DNA.”

In July 2017, I wrote about the one DNA match that I truly cared about. That would be the one where DNA proves my grandpa Carroll Lankford’s connection to the Janes family of Greene County, Georgia. You can read about it here if you missed reading it when I posted it. Instead, I went to the new ThruLines web page on Ancestry to see what DNA connections showed up. According to Ancestry, “ThruLines illustrates how you may be related to your DNA matches through a common ancestor.” It makes it easy to see how others doing research connect to you through DNA. I also wanted to do another post showing my connections to Bairdstown Cemetery so looked at the tombstone photos I’ve taken there. And I wanted to find a random person who I hadn’t connected yet versus one of the many who I already know connect to my Lankford family. I finally settled on Miles A. Caldwell. Miles and I have no common relative but he was the father-in-law of my 1st cousin 3x removed, Katie Mary Wilson Caldwell who was married to his son, Homer Anthony Caldwell. Katie was the daughter of William Oliver Wilson and Mary T. Lankford. Mary Lankford was the daughter of my 3rd great grandparents James Meriweather Lankford and Caroline B. Hobbs which makes her my 2nd great grand aunt. So, there was a connection!

Sometime after Miles was born, his family moved to Alabama. On November 19, 1850, five-month-old Miles and his family lived in District 19 of Chambers County, Alabama. It took me two days to find them in the census records because they were enumerated as the Colwell family, reminding me that you always have to check different spellings. Miles’ father was a farmer and his 15-year-old brother Cullen a student. No one in the family could read or write. There was another Colwell family living next door—Joshua Colwell (62), born in Maryland, his wife Mary (52), and their son Joshua Jr. (18). Both Mary and Joshua Jr. were born in Georgia. I assume they were family but at this point, don’t know what the relationship was.

On August 8, 1860, Miles and his family lived in the Southern Division of Chambers County, Alabama. His 46-year-old father worked as an overseer with a personal estate valued at $500. Miles and his 14-year-old brother Joshua were both attending school.

I have been unable to find Miles in the 1870 census but they apparently moved back to Georgia between census years 1860 and 1880.

On June 3, 1880, Miles lived with his family in District 138 of Greene County, Georgia. His father was a farmer, his mother a housekeeper. Miles’ paternal grandfather was born in Maryland. This record enumerates his 13-year-old sister Mary as adopted. Miles was a farmer. There were two servant women named Martha B. Lester (39) and Jane (20) living in the home along with Judge Lester (14), Elsie Lester (11), Ellen Lester (4), Paul Lester (3 months), Lewis Lester (6), and Pat Lester (4). His brother Cullen lived next door.


Mrs. Caldwell, the mother of Messrs. Cullen, Miles and Joshua Caldwell died last Friday evening at 2 o’clock and was buried in the cemetery here (Bairdstown) Saturday evening at 3 o’clock. Rev. J. F. Cheney conducted the funeral ceremonies. She was 79 years of age.

On June 7, 1900, Miles and his family lived in District 138 of Woodville, Greene County, Georgia. Miles and Sallie had been married for 18 years. Sallie was enumerated as the mother of seven children, four of which were living. Miles was a farmer. All of the children were in school. The only person in the house who was unable to read or write was his mother Sallie.

On May 2, 1910, Miles, Sallie, Abbie, and Estelle lived on Bairdstown Road in Woodville, Greene County, Georgia. Miles and Sallie had been married for 28 years. Sallie was again enumerated as the mother of seven children, four of which were living. Miles was a farmer on a general farm.


The many friends of Mr. C. J. Caldwell of near Bairdstown regret to learn of his death and burial last week. He was a Mason and a member of Howard lodge at Maxeys. He was seventy-five years old, joined the Baptist church when young and served his country in the Confederacy.

Miles’ son James died in Fulton County, Georgia on July 20, 1914 at the young age of 30. Census records for 1910 show that James was a locomotive fireman, a dangerous job of shoveling “coal into a train engine’s firebox through a narrow opening, thereby feeding the fire coal” according to Wikipedia. The Wiki page Brotherhood of Locomotive Firemen and Enginemen further states that “The job of a locomotive fireman was physically demanding—strenuous, filthy and dangerous.” I don’t know what caused James’ death at such a young age, but his occupation was certainly a possibility. James was buried at Crest Lawn Cemetery in Atlanta, Fulton County, Georgia. Miles’ wife Sallie died in Georgia on March 30, 1916. She was buried at Bairdstown Cemetery. And then shortly after the death of his wife, Miles died at age 67 in Georgia on June 9, 1916. The “Oglethorpe Echo” reported his death on June 16, 1916:


The funeral services of Mr. Miles Caldwell was conducted Saturday afternoon here (Bairdstown) by Rev. Robertson. The body was interred in the cemetery. His wife preceded him two months ago. He leaves three children, one son and two daughters to mourn his departure.

Miles was buried at Bairdstown Cemetery in Bairdstown, Oglethorpe County, Georgia. His stone reads “Trusting in Jesus he passed over the river.”