Birthdays of my brother’s past

The 52 Ancestors theme this week is “brother.”

For my post this week, I’m sharing two photos that I discovered on my trip home to Atlanta earlier this year. The first photo is of my brother Michael. You can see there are two candles on the cake so it was taken on his second birthday. He’s standing in a chair at the dining room table of our Macon Drive house in Atlanta. I can tell it was the dining room because he’s in front of the mantle that I remember being there. Mama told me that Michael always wore a jacket to church which tells me it was a Sunday. Siri confirmed that for me. After church, we always came home and had Sunday dinner in the early afternoon. That day we had birthday cake for dessert and he looks like he can’t wait to dig in! I bet it was frosted with seven-minute frosting, a recipe Mama often used. I can't count how many times I saw her making seven-minute frosting. It's a mixture of sugar, egg whites, cream of tartar, salt, and maybe a little water. She would beat the mixture with an electric mixer over a double boiler. After beating the frosting for seven minutes, she’d add a little vanilla. It’s been years since I had a cake frosted that way, but I remember it was yummy.

The second photo was taken the following year on the landing of the back-yard steps at our Macon Drive house. Three candles now adorn the cake Michael is holding, assisted by me, one of his big sister’s. Doesn’t he look happy wearing his “Grandpa loves me” t-shirt and holding his birthday cake!


I vaguely remembered seeing these two photos at some point in my life, but this time, I discovered something that gave me a little chuckle. Upon closer observation of the photos, I realized that Michael’s name was misspelled in both photos. 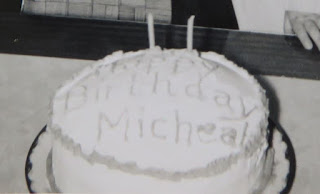 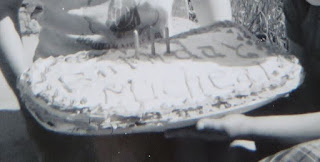 For whatever reason, Mama switched the “a” and “e” in his name and spelled it “Micheal” when decorating his cakes those two years. Have we been spelling his name wrong all this time, lol. As it turns out, Micheal is actually the Irish/Scottish equivalent of the English spelling of Michael. (I’m always learning new stuff in my quest to research my family history.) And yes, my DNA shows an ethnicity estimate of 23 percent Ireland and Scotland, so perhaps she spelled his name that way on purpose as a nod to his heritage!