The Smith family, an easy find 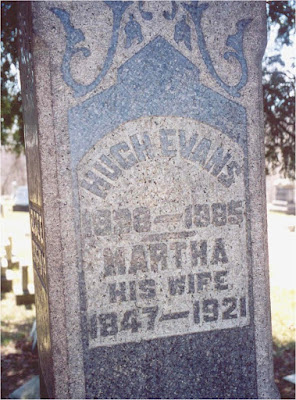 The 52 Ancestors theme this week is “easy.”

When I first started getting serious about doing genealogy, my mother-in-law told me her family would be hard to research. Why you ask? Because their surname was Smith. I saw another researcher blogged about the very same thing this week so it seems to be a common thought about that name. But actually, the Smith family has been very easy to research! Lucky for me, my husband’s ancestors named three of their children with “E” names—Electra, Erastus, and Eunice. Because of that, they’ve always been easy to find. So, since I’m talking about that family, I thought I’d write about one of them this week. I’ve already written about Electra and Erastus, so should have written about Eunice since that’s who I mentioned earlier, but I chose their sister Martha instead. I’m glad I did because in the process of checking my research, I corrected an error in her line of the tree. I knew something wasn’t right but couldn’t figure out what it was until I did some additional research to write this post.

Martha’s father, an innkeeper in Apollo, was very active in the community. He was a member of the town council and the board of school directors. He was a postmaster for Apollo at one point, running the post office from his tavern, and was also Apollo’s first tailor.

Martha was not yet three when her one-year-old sister Minerva died. Minerva contracted cholera and died on May 17, 1850, four days before her first birthday. She was buried at Riverview Cemetery in Apollo. On November 7, 1850, the census enumerator found the family still living in Apollo. Two of Martha’s step-siblings lived in the home—Margaret McIlwain, age 20, and John McIlwain, age 14. There was also a 26-year-old male with the last name Chambers living in the home; his first name is unreadable. Martha’s father John was enumerated as an innkeeper with real estate valued at $2,000. The family attended the First Presbyterian Church in Apollo where Martha was baptized on October 11, 1858.

On July 5, 1860, Martha and her family lived in Apollo. Her father was still running the inn, assisted by her mother Jane. There had been no change to the value of their real estate, still recorded as $2,000. Her father had a personal estate valued at $500. Electra and Erastus were both enumerated as “labourer.” My guess is they were both working at the inn. Erastus was attending school, as were the other three children. Life at the inn took a tragic turn when Martha’s father John died at the age of 53 in Apollo on March 11, 1864. He was buried at Riverview Cemetery in Apollo. Erastus and step-brothers James and John McIlwain served during the Civil War. Erastus served with Company E of the 139th Pennsylvania Infantry Regiment. James served with Company G of the 11th Regiment Pennsylvania Reserve Infantry (40th Infantry Regiment Volunteers). Two of James’ children died while he was away. John served in Company I of the Pennsylvania 78th Infantry Regiment. He died on August 9, 1865; circumstances unknown to me. John was buried at Riverview Cemetery in Apollo. Martha married John “Hugh” Evans in Apollo on January 1, 1866. The Rev. John Orr performed the ceremony. She was recorded as Mattie E. Smith in the marriage registry. Together Martha and Hugh had six children—Elsie E. Evans, Anna P. Evans, Frank William Evans, Edith Electra Evans, Bennie R. Evans, and Alice Stanley Evans. Elsie was born in Apollo in September 1866. Her sister Anna was born in Apollo on September 20, 1868.

On July 9, 1870, Martha and her family lived in the Washington Township of Westmoreland County, Pennsylvania. Martha was keeping house while her husband Hugh worked in a dry goods store. Both Hugh’s real estate and personal estate were valued at $3,000 each. Their son Frank William Evans was born in Westmoreland County on November 30, 1872. Edith was born in Apollo on October 17, 1874. They gave Edith the middle name of Electra, probably to honor Martha’s oldest sister. A son name Bennie was born in 1876. Bennie didn’t survive infancy and died in 1877. I previously thought Martha only had five children but during my research for this post, realized that she had Bennie. The year 1877 also brought the death of Martha’s mother. Both Bennie and Jane were buried at Riverview Cemetery in Apollo. The decade ended with the birth of Martha’s sixth child, Alice, born in Apollo on October 29, 1879.


Shortly after Alice’s birth, the family moved to the village of Paulton, Westmoreland County, Pennsylvania which is where the census enumerator found them on June 22, 1880. Martha was enumerated as a housekeeper and Hugh as a merchant. The 1870 census record noted that Hugh’s father was foreign born but didn’t state where he was from. I later learned from the 1880 census that he was born in Wales. Martha and Hugh’s five children ranged in age from 13 to 1 in 1880. The 1880’s wasn’t a good decade for the family. Martha’s brother, James McIlwain, a saddle and harness maker, died on August 4, 1883 after falling from scaffolding on the job in Apollo. He was buried at Riverview Cemetery in Apollo within sight of the John McIlwain, Jane Smith, and John T. Smith plot. Martha’s husband Hugh died in 1885. I’ve yet to find a death record for him so don’t know the cause. He was only 57 years old. And then Martha’s brother Erastus contracted erysipelas, also known as St. Anthony’s Fire, and died on April 13, 1886. Erysipelas, a bacterial infection of the skin that typically involves the lymphatic system, “was a feared disease in pre-antibiotic days” according to Verywell Health. Erastus was buried at Riverview Cemetery in Apollo.

The next decade saw more death in the family. Martha’s sister Eunice died in 1890, leaving six children behind, the youngest of which was five years old. Eunice was buried at Riverview Cemetery in Apollo. There was finally some joy in the home when daughter Anna married Stewart A. Davis on June 9, 1897 at the Ascension Episcopal Church in Pittsburgh, Allegheny, Pennsylvania.

On April 4, 1900, daughter Alice married John Duff Van Tassel in Armstrong County. On June 5, 1900, Martha, Elsie, and Edith lived together in the Washington Township of Westmoreland County. Her son William lived next door with his wife Nellie. Although I can find no marriage record, the 1900 census enumerator recorded Martha’s last name as Gough and noted that she was married. There was, however, no male living in the home with the three women. It appears that Martha was not working while both Elsie and Edith were telephone operators. Martha was enumerated as having had six children, all of which were living which we know is wrong since Bennie died in 1877. Martha’s son Frank died in Apollo on Christmas Day in 1906 at the age of 35. The cause of death listed on his death certificate is anti-alcoholism. I had no clue what that meant so of course searched the Internet. I didn’t find a good description but if I understood what I read; it means he died during treatment for alcoholism which he had been in for 21 days. What a sad time for the family. Frank was buried at Riverview Cemetery in Apollo.

By April 16, 1910, Martha had moved back to Apollo where she lived on Pennsylvania Avenue with daughters Elsie and Edith, and her eight-year-old grandson Archie Evans. Archie was the son of Frank Evans, who died in 1906. Martha was enumerated as widowed, 65 years old, and the mother of six children, four of which were living. Elsie was still a telegraph operator while Edith had changed jobs and was now working as a stenographer at the Sheet Tin Company. On March 9, 1912, Martha’s brother John died of cardiac dropsy contributed by la grippe, or rather the flu. He was buried at Riverview Cemetery in Apollo. Martha and Elsie lived in New Kensington, Westmoreland County, Pennsylvania in 1915. Daughter Anna died in Pittsburgh, Allegheny County, Pennsylvania on January 20, 1915 following surgery for a fibroma of the uterus. She was 46 years old. Anna was buried in Apollo.

On January 13, 1920, Martha, Elsie, and Archie still lived on Pennsylvania Avenue in Apollo, although in a different house than in 1910. At 73 years of age, Martha was renting their home. Elsie, still single at 53 years of age, was still a telegraph operator. Archie was now 18 years old but hadn’t joined the workforce yet. Martha died at the age of 74 in Apollo on March 31, 1921. The cause of death was gastroenteritis (stomach flu), contributed by transverse myelitis (inflammation of the spinal cord), which she’d had for three years. She was attended by Dr. T. J. Henry, a prominent physician from Apollo and “author of The History of Apollo 1816-1916, a definitive history of Apollo’s first hundred years” according to his biography on the Apollo Area Historical Society website. Her daughter Elsie was the informant on her death certificate. Martha was buried at Riverview Cemetery in Apollo on April 4.