The 52 Ancestors theme this week is “at work.”

What do you see in this picture? Looks like Smokey Bear hard at work, right? Wrong, it’s actually my brother-in-law Randall Streetman doing what was described by my sister Bonita as “his favorite job of his career.”

Smokey Bear celebrated his 75th birthday on August 9 so of course that was covered on the news that day. I remembered that Randall wore the Smokey suit years ago and that I had never seen any pictures of him dressed as Smokey. That evening I sent a text message to Bonita and asked if they had any pictures of Randall as Smokey. A day later, she sent these two pictures. During a text exchange we had about the pictures, I decided to do this blog post. By luck, it fit perfectly with this week’s theme!

Smokey was born in 1944 as a “public service advertising campaign” and according to the Smokey Bear Facebook page has been “educating generations of Americans about their role in preventing wildfires” since then. Most people recognize this beloved mascot and his famous slogan, once Only YOU Can Prevent Forest Fires and now Only You Can Prevent Wildfires. If you’ve visited a national park, you’ve seen Smokey Bear signs warning you of fire dangers. He’s appeared on TV, in a Disney film, the Macy’s Thanksgiving parade, posters, and stamps. Federal, state, and local workers have dressed as Smokey for years, visiting schools to teach children about fire prevention. 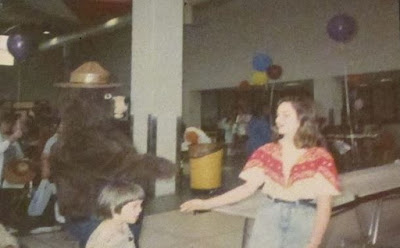 Randall worked for the Georgia Forestry Commission in their Fayette County office for several years. The job was basically 24 hours a day in that fires could happen any time day or night. Forestry Commission rangers fought fires, plowed fire breaks, did controlled burns, sold seed trees, and approved residents burning trash, among other things. They also gave presentations at Fernbank Museum, churches, and other places. When Randall took on the job of Smokey, he and his ranger escort visited local schools, fairs, meetings, and various events to spread Smokey’s message, often after hours. In the photos Bonita shared with me, Smokey was most likely visiting a school that day. Randall remembers the Smokey suit was very hot. By the time he came out of it, he was soaking wet. But he liked to see the children’s reactions so it was worth it.

In 1995, Governor Zell Miller mandated that his government be downsized. As part of that mandate, the Georgia Forestry Commission determined that they would close six metro Atlanta offices, including Fayette County where Randall worked. The Atlanta Constitution reported that “The Forestry Commission is offering to lease it’s forest firefighting equipment to each county [fire departments] for $600 per year, then pay each county $10,000 per year to take over the responsibility … .” Fayette County would get “a bulldozer and a trailer, plus some hand tools” according to the news article. If the offer wasn’t accepted, other county Forestry Commission units would be called in the event of a fire since the Fayette County office would be closed. This, however, would mean a longer response time. Workers from Fayette County were offered jobs at other forestry offices but there were few openings. If Randall had taken a job with another office, it would have meant moving his family to that county as you had to live within so many minutes of the unit. Randall didn’t want to move so he hung up the Smokey suit and left the Forestry Commission. But he played a small part in Smokey’s history, something I’m sure he is very proud of. 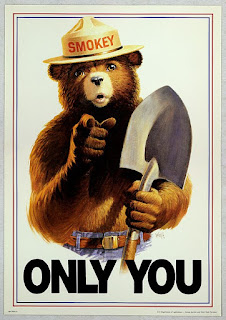 Smokey Bear; https://en.wikipedia.org/wiki/Smokey_Bear.
Posted by Denise at 8:49 AM