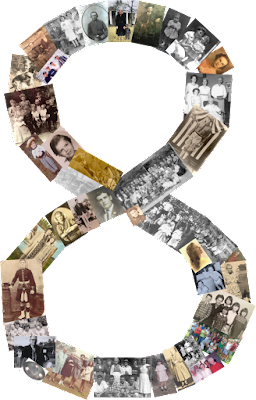 Eight years ago, I started this Living in the Past blog. My first post, published on September 5, 2011, was about Bairdstown Cemetery. It was short, mostly photos, but that’s what started it all. I originally began this blog to enhance my research. I was also beginning to build simple web pages at work so thought it might help me with that. Maybe it did, but just a little.

The first two and a half years were slow. In 2011, I blogged 16 times from September to December. In 2012, I only blogged 16 times during the entire year. In 2013 and the first eight months of 2014, I didn’t blog at all. I started to think about shutting the blog down but this was during a time when my ailing father-in-law was living with us and we were pretty much homebound (not complaining, just stating facts). He liked to watch the old westerns (as does my husband) which I’m okay with but not every day. So, to entertain myself while sitting with the guys at night, I surfed the Internet, looking for inspiration. That’s when I discovered the No Story Too Small: Life Is Made of Stories blog, written by Amy Johnson Crow, a Certified Genealogist. Amy had issued the 52 Ancestors challenge to her readers: “The premise: write once a week about a specific ancestor. It could be a story, a biography, a photograph, a research problem — any that focuses on that one ancestor. The next week, write about a different ancestor. In 52 weeks, you’ll have taken a closer look at 52 people in your family tree… and maybe learned a little bit more about them in the process.” I was intrigued by the challenge, thought about it for a couple of weeks, and then made a commitment to myself to at least try to finish out the year by blogging about one ancestor each week. And I’m still going! Now I can’t remember a time that I wasn’t researching and writing for the next blog.

To date, I’ve posted 297 stories with a total pageview count of 632,428. The most viewed story is Hurricane Agnes floods Manassas in 1972 with 1,475 views. I’m not surprised that this one got a lot of views since it’s about a hurricane. Most of the hits probably came during hurricane season. I’m not sure what brought in the 1,251 page view count for Going to the library. This post was a short and simple one, where I told my few memories about visiting an Atlanta library growing up. The Warner’s Skyline Drive-In Theater story is all about my husband’s uncle Ralph Murphy’s photos. When writing that post, I researched and found the son of the second owner of the theater. I attempted to contact him before I posted but it was almost a year before he answered me. He was happy to see the photos. He said his family didn’t take pictures of the drive-in so he only had the pictures in his memory. With my permission, he shared the blog link with a “You know you’re from Clarksburg WV” Facebook page which led to 1,125-page views. One I’m very proud of is My Mama, the strongest woman I know with 482 views. I’m happy for people to know what a special person she is. Various posts have been shared via social media 24 times in the past two years. That tells me I must be doing something right.

To enhance the blog, I added several tabs:
I have a list of things I still want to blog about. If my brother-in-law approves, I’d like to share his father’s World War II letters. I’ve transcribed all of them and am now compiling them and doing some research to tell his story. I’d also love to do a series on Mama’s volunteer activities, something near and dear to her heart. I’ve started gathering information and photos for this project so just need to start writing it. I found several news articles about Company C of the 3rd Regiment Georgia Infantry (Dawson Grays) reunions and would like to share those. This was the unit my 3rd great grandfather and other ancestors served in during the Civil War.

Blogging about my ancestors has forced me to take a second look at my research. I’ve found and corrected mistakes. I’ve discovered many stories that I never knew and proven family legends. It’s a great place to share photos. And, I believe I’ve learned more about history than I ever did in school! I like to say I’m not a writer, but I don’t let that stop me. It’s hard work to research and write a post every week but I’m enjoying it. Thank you to the family members who have shared their stories with me and to everyone who has taken the time to read the stories I’ve posted. I looking forward to continuing this adventure.

Reference
Crow, Amy Johnson, 52 Ancestors in 52 Weeks, No Story Too Small: Life Is Made of Stories blog.
Posted by Denise at 5:46 PM

Email ThisBlogThis!Share to TwitterShare to FacebookShare to Pinterest
Labels: 52Ancestors