The 52 Ancestors theme this week is “context.”

One of the items we found in my mother-in-law’s (Mary Athya Murphy) belongings after she passed away was a spiral composition book. Inside the book, she had written about birds, trees, flags, and famous women. There were also several items tucked inside the pages of the book. I wanted to know more about this book and it’s contents so decided to do some research to understand the context of what I found inside. After all, she’d kept the book for 65 years so it must have had special meaning to her.

On the first page, Mary wrote “Camp Fire Note-book” in her distinct, neat handwriting. Below that she also wrote … “Make a book of a (sic) least 8 pages, telling about birds, flowers, trees, & other things of nature.” So right off the bat, you know she must have been a Camp Fire Girl. According to Wikipedia, the Camp Fire Girls dates back to 1910 and “was created as the sister organization to the Boy Scouts of America. The organization changed its name in 1975 to Camp Fire Boys and Girls when membership eligibility was expanded to include boys. In 2001, the name Camp Fire USA was adopted, and in 2012 it became Camp Fire.”


Mary kept three membership cards that show she was a Camp Fire Girl in Apollo, Armstrong County, Pennsylvania from November 1940 to November 1943. Her group leader, or guardian, was Mrs. Jess (Jane) Jackson for the first and second years. Jane had a daughter named Jessie Jane Jackson who was the same age as Mary according to the Register of Baptisms for the First Presbyterian Church in Apollo. The guardian in Mary’s third year was Irene Owens.

Mary achieved the rank of Trail Seeker in May 1941. According to the Merriam-Webster Dictionary, the Trail Seeker rank is “the first of four ranks attained by Camp Fire Girls.” The other three ranks were listed on the membership card as Wood Gatherer, Fire Maker, and Torch Bearer. Achieving the four ranks was important enough to the Camp Fire Girls that it was often reported in the local newspapers. Hiking was also important to the Camp Fire Girls. In a statement by James A. McCafferty, President of the Potomac Area Council of the Camp Fire Girls during 1967 Senate Hearings on the Nationwide System of Trails, it was noted “in our program blue birds, which are our youngest girls, do much hiking. When they ‘fly up’ to be Camp Fire Girls their first rank is that of trail seeker. Simply stated, it tells each girl to ‘go on a nature hike. Tell about three interesting things in nature you saw, where seen, and some interesting facts about them.’ This is a challenge to girls 9, 10, and 11 years old. We think it important to have hiking trails not only for today’s girls but for the many millions of young people whether or not they belong to a national youth organization.” I’m sure the Camp Fire Girl leaders felt the same way in the early 1940s.


The next three pages of the book was dedicated to birds. Mary wrote a description of what a bird is, followed by descriptions of a “Crow” and a “Jay.” She included a photo of the Blue Jay. 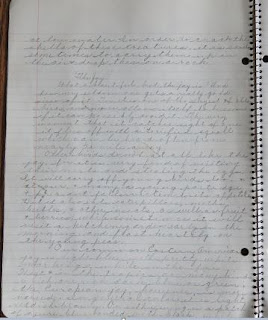 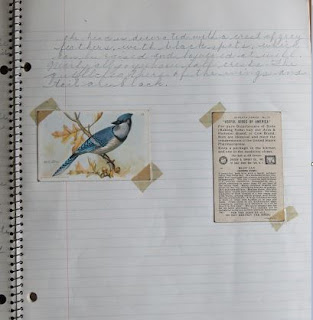 Two pages were dedicated to trees and include dried Maple and Sumac leaves. On another page, she wrote “from a rambler rose (young), it bares a red rose.” Pressed between the pages of the book she put a stem of leaves from the rose plant. 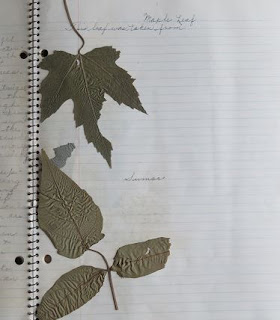 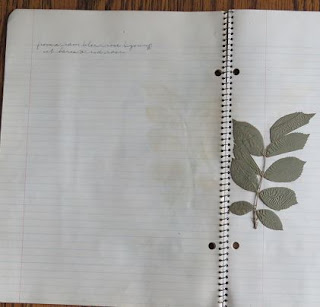 One page seems to be random and doesn’t really fit into the theme of the book—it contains four images that were cut out and then traced on the inside edge. On two of the images, she wrote “Bracelet” and “Initial.”


Seven pages were dedicated to flags from different countries, beginning with the United States. Mary cut the flag images out of a newspaper and taped them onto the pages. Each image contains narrative about that particular flag. Mary wrote the narrative verbatim for each flag. 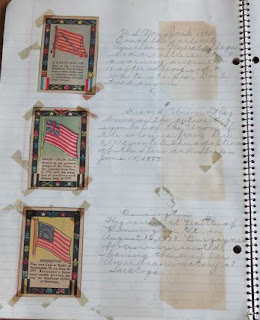 The last page that Mary wrote on was titled “Famous Women” and included an image of Florence Nightingale, also cut out from a newspaper. The text isn’t a biography for the famous nurse although it does mention her birth, then goes on to spring flowers, trees, and blossoms. I don’t know if Mary wrote the text herself or if she copied it from somewhere but it appears to be unfinished. It reads:


On the 12th of May, the month of flowers, about a hundred years ago, a little English baby was born in a villa just outside the fair city of Florence. Spring had been busy sowing the fields with flowers, spreading a carpet of tender green beneath the gray olive trees, and decking with delicate budding leaves the vines. She scattered blossoms abroad with such a lavish hand that the old city of palaces, with its sun-baked roofs and narrow shadowy streets, now well deserved its name of the City of Flowers. New life was springing up everywhere and the little new life


In the back of the book, Mary taped two booklets. The first one was a Camp Fire Girls booklet titled “A Part for You … In Shaping Tomorrow.” In this booklet, you learn the origins of the program, what the age group is and how many girls constitute a group, what the national dues are, appropriate dress for special group occasions, and the many things a girl can do with a group and as an individual. The booklet describes the different groups within the program, for example Blue Bird and Horizon Club Girl. The program doesn’t end once you become a woman either. The booklet goes on to describe how you can be involved in a leadership position as a Camp Fire Guardian, Blue Bird Leader, or a Horizon Club Adviser, or in the Guardians Association at the local, district, or national level. 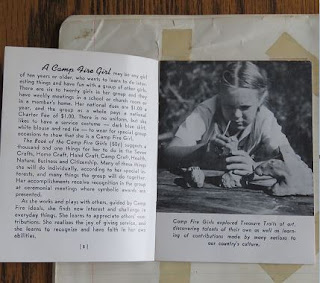 The second booklet taped to the back of the book is titled “Equipment for the Camp Fire Girl” and was published by the Campfire Outfitting Company in New York, New York. This is where her mother, Bertha Athya, would have gone to buy all things related to the Camp Fire Girls—service costumes and accessories, ceremonial items, handbooks, honor beads, and jewelry. It also included books and forms for recording your honors, stencils (and their meaning) to be used in hand crafts, emblems, posters, books, and craft books. It has two pages dedicated to equipment for the Blue Birds, and then moves on to Camp Fire songs, games, fundraising items, and camping supplies. 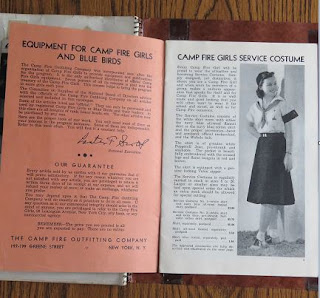 Finally, Mary had three items that were mentioned in the booklets. The first item is a Camp Fire Girl’s Health Chart. Mary filled the chart out for the month of March 1942, placing X’s or slashes on each day she completed an item on the chart. The items listed on the chart are:

The back side of the chart provides “explanatory notes” such as:


2. Brushing the teeth property should not only clean them, but should massage and stimulate the gums, without injuring them. It is not so much what is on the brush which does good, as it is the brushing itself.

3. Breakfast is one of the most necessary meals of the day. The body is without food nearly eighteen hours if this is neglected. Cultivate the habit of using at least the equivalent of one glass of milk a day and eggs several times a week.

4. Bowel movement should take place during the early morning.

6. Bath during the day to be a shower, tub or sponge, and always with warm water and soap. 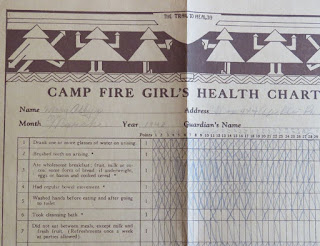 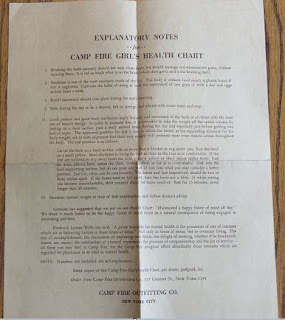 The second item is a leather patch. It appears that Mary used one of the Girl Scout stencils to paint the symbol onto the patch. According to the web page “Camp Fire Girls - Old Patches, Vintage Kids Clubs Online Museum,” this one is the Apprentice Symbol which represents “inspiration gained from Camp Fire.” The web page further states “The upper figure represents a feeling for beauty. The color is green.” Mary’s patch is in fact green.


The third item was probably one of the craft items Mary made and may have been a bracelet. It’s a wooden pendant with a short leather strap. She painted a camp fire on the front of the pendant.

Mary would have been 11 years old when she joined the Camp Fire Girls. It’s been fun to take a look at this period of her life—to think about her going to the meetings, taking hikes, performing some type of service, etc. I wish I had known about this before she passed away. I would have loved to have her tell me stories about her three years as a Camp Fire Girl.