The 52 Ancestors theme this week is “harvest.”

Charles’ family lived on land purchased by his maternal grandparents, Stephen and Martha Hanson, in 1909. After purchasing the land, his grandparents split the land among their children with Charles’ mother receiving 92 acres.

Life for the Burnett family was most likely centered around the farm and church. His father was one of the founders of the Liberty Grove Baptist Church in Lawrence County so religion was important to the family. Sadly, Charles was just five years old when his father died suddenly in 1916 after returning from the fields. He told his family he had stomach sickness but the cause of death may have actually been a heart attack. His father was buried at St. Truitt Cemetery in Liberty Grove on November 29, 1916. I decided to do this timeline for Charles based on this photo of him and his brother Leonard harvesting a pumpkin, probably on the family farm. Charles looks like he was five or six years old at the time, about the time his father passed away.


On January 9, 1920, Charles, his mother, and siblings lived in Civil District 2 of Lawrence County, Tennessee surrounded by several Hanson families. His mother was a manager on a farm with his oldest brother Samuel helping out as a laborer. Before the end of the decade, Charles’ brother Herbert died of malaria on September 9, 1929 in Lauderdale County, Tennessee. He had been sick for about three weeks. At the age of 26, Herbert was buried at St. Truitt Cemetery.

On April 10, 1930, the family still lived in Civil District 2 of Lawrence County. They were still surrounded by Hanson families, although different ones than in 1920. There were only four children still living at home—Jasper (23), Ellis (21), Charles (enumerated as Charlie at age 19), and Leonard (16). His sister Virginia (Virgie) lived next door with her husband, Hobert Plunkett and their two children, Avis and Travis.

Charles’ brother Ellis died suddenly of a ruptured appendix on July 14, 1936 at Eliza Coffee Memorial Hospital in Florence, Lauderdale County, Alabama. At the time of his death, Ellis lived in Loretta, Lawrence County, Tennessee where he was a farmer. He was just under 28 years old. Ellis was buried at Saint Truitt Cemetery.

On April 15, 1940, Charles and Esther lived on the farm at Lexington Loretto Road in Lawrence, Tennessee. This was the same farm they lived in five years earlier according to the census record. Charles was 29 years old and Esther 26. The census record shows that Charles had a seventh-grade education and Esther an eighth-grade education. He was a farmer, working a 50-hour week. The following year, their first child was born on April 3 in Lawrenceburg, Tennessee. They named their son Charles Daniel Burnett. A second son, Austin Landis Burnette was born in Knoxville, Knox County, Tennessee on March 30, 1943. Austin was named after a man Charles worked with on a construction job during the war. I worked with Austin and several other Burnett/Overton researchers many years ago to research our lines. Austin once told me he added an “e” to Burnett, changing it to Burnette, when he was young to stop people from calling him “Burnit.” Unfortunately, they started calling him “Burnettie” instead. Austin remembered a time when they didn’t have electricity and washing clothes in an old wash pot with a fire underneath. They used a rub-board and made lye soap.

Charles worked as a machine repairer for the Ford Motor Company. 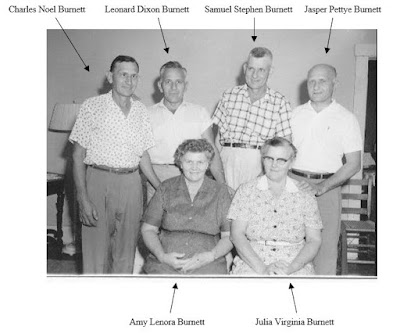 Charles’ mother died of heart disease in Lawrenceburg on November 11, 1957. She was buried beside his father at St. Truitt Cemetery. His brother Leonard died in 1967, brother Samuel in 1987, and sister Amy in 1995. Charles died at the age of 85 on June 28, 1996 at the Scott National Health Care Nursing Home in Lawrenceburg, Lawrence County, Tennessee. He was buried at Tri-Cities Memorial Gardens in Florence, Lauderdale County, Alabama. 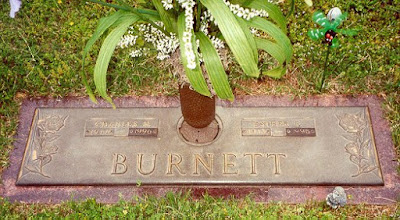 At the time of his death, Charles lived next door to Austin. It was Austin who shared the photos and some of the details in this post. I worked with Austin and several other Burnett/Overton researchers many years ago to research these families. We had a lot of fun. Austin lost his battle with leukemia in 2011.