Memories of trick or treating

The 52 Ancestors theme this week is “trick or treat.”

I hate Halloween. Well, that’s pretty harsh, but I really don’t like Halloween. That being said, I do have a few fond memories of All Hallows’ Eve and going trick or treating with my sisters and brother.

Of course, there was always the build up to Halloween—a party at school, carving a pumpkin, and watching It’s the Great Pumpkin, Charlie Brown. If you missed Charlie Brown, that was your loss. You only got one chance since that was long before VCRs, DVDs, and cable TV. Then we had to figure out what our costume would be. There were no store-bought costumes for us, other than maybe a mask. We’d go through old clothes and pick out something to wear, usually ending up as a hobo. My brother Michael remembers being a ghost one year. That probably meant throwing an old sheet over his head after Mama cut eyes out so he could see. When Halloween finally arrived, we’d all grab a Big Apple sack for our candy haul and off we’d go. Now mind you, it wasn’t just an ordinary paper sack. It was a Big Apple sack, from the local grocery store that Mama shopped at. She made that clear to me when I asked her what she remembered about Halloween. We used Big Apple sacks for many things, including as luggage when we went to Florida. Michael said we each had our own, LoL.

Early on, Mama walked with us. As we got older, we walked the neighborhood by ourselves. Mama remembers it was always wet on Halloween, either from rain or dew on the grass. We hit the neighborhood streets before dark, dragging our Big Apple sacks on the ground as we walked. Inevitably, the sack bottoms got wet and ripped open. Whoever walked behind that person got the benefit of the now bottomless sack. We all remember that happening to Michael one year. He cried all the way home after he realized he lost his candy. Mama made us split our candy with him that night. He used a pillowcase the next year!

Once we got home, all five of us dumped our candy out on the table to pick out what we liked. We traded candy to get our favorites until everybody was happy. We had enough candy to last for days—or so we thought. What I learned just a few years ago was that every day after we left for school, Mama took a handful of candy out of each sack and threw it away so we didn’t eat so much candy. My sister Vanessa must have known Mama was doing that because she told me she hid her candy in the closet so Mama wouldn’t find hers.

Some people went over and beyond to make Halloween special for the neighborhood children. I remember one year going to the house of a girl I went to school with. Her father was a butcher and he set up a horror butcher shop in their basement for the children to walk through. It had different stations set up with bowls or buckets of chicken parts and no telling what else for the children to stick their hands in to feel whatever was in it. It’s gross when I think about it now but I remember we liked it then. Mama said we all washed our hands before we left the basement, thank goodness! My sister Bonita remembers going to a house not far from our house. The family that lived there decorated the inside of their house and let the children walk through to see the decorations. When you walked out of the back door, they had a table filled with hot dogs for everyone to eat. Bonita remembers another house or two that gave out money with the candy.


My husband remembers that they left the house with an empty pillowcase right after dinner. When the pillowcase was full, they came home, emptied it, and headed back out. He said they did that several times before the night ended. Once they finished trick or treating, his Mom spread the candy out on the floor to pick out anything that was open and tossed it out. As a teenager, they still went out and walked and walked and walked the neighborhood, again coming home with pillowcases full of candy. And yes, his Mom still spread the candy out on the living room floor and went through it. He said they weren’t supposed to eat any candy until they got home and let his parents look through it and sample it first to make sure it was good. As expected though, Charlie said they ate plenty of candy before they got home. 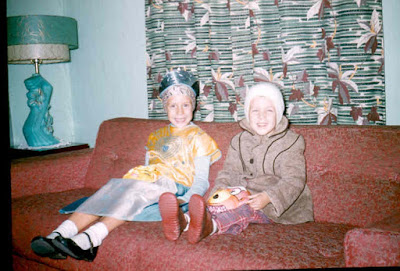 Unlike today, we stayed out for hours and we didn’t have to worry about crazy people doing crazy things to children. Today, children still go trick or treating, but many go to parties or a local mall to trick or treat instead, making their own rocking chair memories.

Thanks to my Mama, Bonita, Jennifer, Michael, Vanessa, and Charlie for sharing their memories with me.
Posted by Denise at 5:38 PM