On June 20, 1900, Mendie and her large family lived in Canon, Franklin County, Georgia. Her mother was enumerated as having had 15 children, 13 of which were living. Her father was a farmer, most likely assisted by his six oldest children who were all enumerated as farm laborers. Nancy, Harrison, and Mendie were attending school. In what had to be devastating to the family, Mendie’s father died at the age of 61 on Valentine’s Day 1907. He was buried at Carroll’s United Methodist Church Cemetery in Carnesville, Franklin County, Georgia. Mendie was just 14 years old when she lost her father.

On May 5, 1910, Mendie lived with her brother James on Jim Hayes Road in Canon, along with her widowed mother Nancy, sisters Dora and Dessie, brother Harrison, and niece Sara Casey. At 25 years of age, James was head of the household. He was enumerated was a farmer on a general farm with everyone in the home except for Mendie helping on the farm.

On January 6, 1920, Mendie, Chester, and their son Robert lived on Lexington Road in Bairdstown, Oglethorpe County, Georgia, next door to Chester’s parents. Chester was farming on the family farm. Both Mendie and Chester could read and write. Mendie was a new mother with Robert just eight months old. Daughter Nancy was born in Oglethorpe County in June 1920, son Mell was born in Canton, Georgia in February 1922. Sometime after Mell was born and by the time Norris was born in April 1924, the family had moved to Charlotte, Mecklenburg County, North Carolina, which is where Norris was born. They lived in a house on Tremont Avenue during that time. Chester worked as a brick layer to support the family. Instead of being a joyous time for the family, Christmas 1926 turned into a very sad holiday. On December 22, Mendie gave birth to a baby boy. The baby was most likely born prematurely and hadn’t fully developed yet so they probably immediately knew he was in trouble. Dr. H. N. Abernathy attended to the baby, but his little body couldn’t sustain life and he died four days later on December 26. His death certificate recorded him as “Infant of R. C. Langford” so it’s possible he was never given a name, but I can’t confirm that. They buried the baby the following day at Trinity Cemetery in Charlotte.

On April 22, 1930, the Lankford family lived in a house valued at $1500 on Glenwood Drive in Charlotte. Chester worked as a brick mason in the public works sector. Mendie was kept busy keeping track of her five children ranging in age from 11 to a year and a half. They were still living in Charlotte when Vesta was born in October 1928 and Otis in October 1930. Sometime after Otis was born, the family moved to Missouri, settling in St. Louis. Their lives would be turned upside down when Chester died of heart disease at the age of 46 in Brentwood, Missouri on October 22, 1938. Now Mendie was left to raise their six children alone. Chester’s body was returned home to Georgia and buried at Bairdstown Cemetery in Bairdstown.

On April 13, 1940, a widowed Mendie and her children lived at 8913 Pendleton Street in Brentwood, Jefferson Township, St Louis County, Missouri. They had been living in this same home since at least April 1935. The census enumerator noted that she had an 8th grade education and wasn’t working. Her 21-year-old son Robert was an assistant timekeeper for a fire brick manufacturer with an income of $1100. Her 19-year-old daughter Nancy was a beauty operator in a commercial beauty shop. Mendie’s son Norris enlisted in the U.S. Army in March 1943, serving as an infantryman during World War II. He was reported missing in action in Germany on December 16. Three months later, on March 2, 1945, the St. Louis Post-Dispatch reported that Norris was actually a prisoner of the German Government. At the time, Mendie lived at 459A Laurel Street. I believe Norris was released from captivity on May 1, 1945 and released from the Army on November 29, 1945.

In October 1950, Mendie probably received a phone call that all parents fear after her son Otis was involved in a car accident. He and his three passengers all suffered non-life-threatening injuries after crashing the car into a tree. In November 1951, Otis enlisted in the U.S. Marines, serving during the Korean War.

Mendie died in St. Louis, Missouri on December 30, 1979. She was buried beside her husband Chester at Bairdstown Cemetery in Georgia. 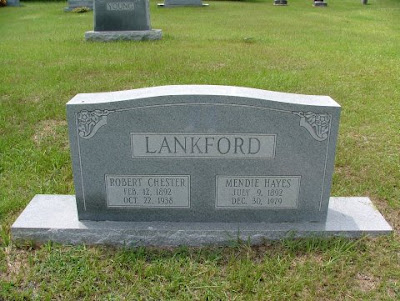