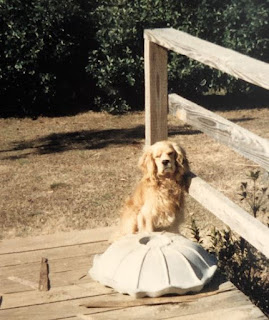 You won’t find family pets in your ancestral tree but they are definitely part of the family. Once upon a time, we had a dog named Barney, the sweetest Cocker Spaniel you could ever have. Barney originally belonged to my sister Jennifer and it was her family who named him. I don’t remember why, but Jennifer gave Barney to Daddy while he was still a puppy. Daddy loved dogs and already had Spot, Barney’s brother, so he happily took him when offered. Like all dogs, Barney and Spot loved to run and play, and Daddy had a nice big fenced in yard to keep them safe and happy. Unfortunately, they tore up Daddy’s flowers, and Daddy loved his flowers, so he wasn’t happy about that. Around that time, our dog Murph, a Shepherd/Collie mix, died. Our oldest son Chris was around four years old then. Chris and Murph had been best buddies and Chris really missed him after he died. One day, Chris asked me, “Mommy, can I die for just a little while so I can go see Murph?” It broke my heart. The next time I talked to Daddy I told him what Chris said and his immediate response was I’m bringing him a dog—and he did. Before you knew it, we were picking the two of them up at Dulles Airport.

Barney turned out to be a good dog too. He was only a year old when he moved to Virginia and he had a lot of energy. Our yard was fenced in so he could run all he wanted to and he had a little boy to play with, soon to be two little boys. Like most dogs, Barney would run up and down the fence barking at people as they walked past our house. It didn’t take much to keep him happy.

He slept in the bed with the boys. Chris remembers he slept with him all the time.


When I look back at Christmas pictures, Barney was always right there with Chris and Kevin. Santa brought him treats too. Pig ears were his favorite. Barney was good about leaving the Christmas tree and gifts alone, but one Christmas I remember bringing a gift home from work that I hadn’t opened. I put the gift under the tree and we left for dinner, not worried about it since that hadn’t been a problem before. It turns out the box contained candles and Barney must have smelled something so of course, did what any dog would have done, he figured out which box it was and he opened it. When we returned home, the box and wrapping paper had been torn to shreds and were all over the living room floor, along with the candles. And there sat Barney in the middle of it all, looking guilty.


We used to take two week-long vacations every summer. The first one was to Florida. When it was time to pack the van, my husband would pull it up in the yard to make it easier to pack (we took everything but the kitchen sink). It’s like Barney knew we were going somewhere and he’d crawl into the front seat and just sit there, like he was waiting for us to get in and head down the road. We’d literally have to drag him out of the van when we finished packing. We couldn’t take him on that trip but he always went with us when we headed to Atlanta to visit my family. He never forgot Daddy and he’d go crazy when we got to his house. Kevin remembers how excited Daddy got as well when he saw Barney.


Barney was pretty much a one trick dog. He’d shake your hand and that was about it. My husband remembers he wouldn’t let you get close to his bowl at dinner time. He’d growl at you if you tried to. Barney liked to look out the window and would sit on the back of the couch, which was the perfect height for him to see outside. As he got older, we had to keep an eye on him because he couldn’t keep his balance and fell off the back of the couch a time or two. 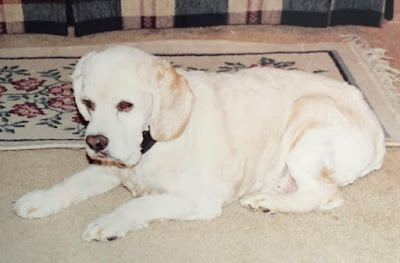 We lost Barney in May 2003. At nearly 17 years, he just got old. His health had been declining for a while and we knew his time on Earth was coming to an end. He got to a point where he couldn’t see and probably didn’t know what he was doing. He’d walk in a circle and hit his head on the furniture as he turned. If you didn’t stop him, he’d just keep going in circles. Other than old age, he didn’t have health problems so we decided to just keep him comfortable. But we knew we’d have to make a decision if it came to a point where he was in pain because we didn’t want him to suffer. I remember arriving home from work the Friday night before he we had him put down, finding him crying in pain. We knew it was time and called the veterinarians office right then and scheduled an appointment for the following morning. It was the longest night. We took turns sitting and hugging him, all saying our goodbyes. The next day, Charlie, Kevin, and I took him to the veterinarian’s office while Chris and his friend stayed home to dig a grave for him. When we returned, we put the box in the grave and then all stood there, lost in our own thoughts for a few minutes. Out of nowhere, Kevin says, “has anyone seen my baseball shirt?” We all looked at each other, none of us wanting to open the box. Finally, Chris’ friend said he’d do it and sure enough, there was the shirt. Turns out it had gotten caught up with the towel Barney was wrapped in when we arrived at the veterinarian’s office. The nurse must have thought we meant it for him and she wrapped him in both the towel and shirt. 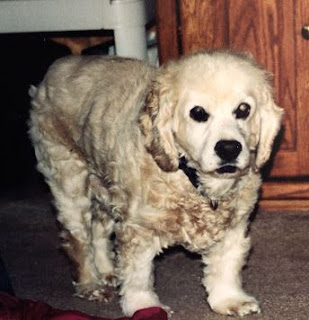 It’s been a while since we had a dog and I miss having one. I’m hoping to get one after we retire.
Posted by Denise at 8:27 PM