It’s been a while since I shared a family treasure and because I’m behind on my research, I thought why not this week. Short and sweet.

My Daddy, Sam Lankford, used to do embroidery to relax at night. This was more than likely a winter activity because his evenings were spent in his gardens during the spring, summer, and fall months. If you follow my blog, you’ve seen his embroidered picture that won Best of Show at the Prince William County Fair in Manassas, Virginia or the crewel owl that I had made into a pillow for my son Chris. You would have also seen some of his quilts. What I’m sharing today are pillowcases and a table scarf he embroidered. I don’t know when they were completed but he gave them to me during the 1980s.

The first image is from a table scarf, you know, the kind you used to see at your grandma’s house. Can’t you just see Cinderella climbing into her pumpkin coach, on her way to the ball? I used this scarf to protect my hutch for several years but it’s been years since I put it away. Actually, I’m not sure where I put it. I know it’s in the house somewhere. I need to look for it! 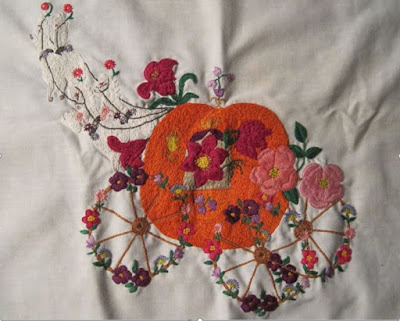 The next three images are from pillowcases, so there are two of each. I’ve never used these pillowcases and at one point thought about framing them instead. You can see on the image with the pear that he used a pattern but I’m sure he added his own personal touch. His stitches were clean and tight. 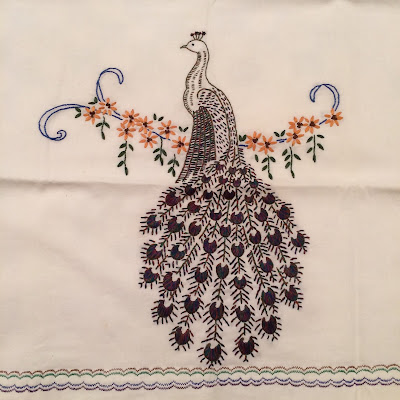 I really don’t ever recall seeing Daddy doing any embroidery work so still can’t wrap my head around the fact that he created these beautiful pieces of art. I hope you enjoy them.
Posted by Denise at 7:36 PM