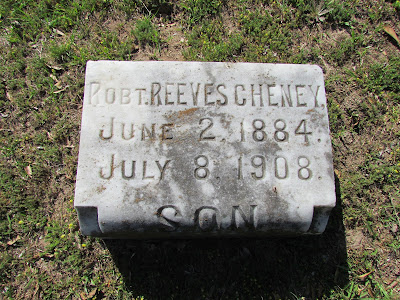 Robert Reeves Cheney, son of James Stephen Cheney and Emily A. Young, was born in Georgia on June 2, 1884. I haven’t found a record yet that lists the city or county of his birth but his parents were married in Greene County in 1882 and lived in Lexington, Oglethorpe County in 1886 so he could have been born in either county. He went by Reeves, the middle name of his grandfather, Enoch Reeves Cheney. There were seven children in the Cheney family—Tallulah Cheney, Robert Reeves Cheney, William Lee Cheney, Frank Colly Cheney, Eva M. Cheney, Florence Dell Cheney, and Sarah J. Cheney.

Reeves is my 2nd cousin of husband of 2nd cousin 3x removed. We have no common relative. The Cheney family connects to the English family which connects to my Lankford family, all from Oglethorpe and Greene counties.

On June 6, 1900, Reeves and his family lived on Hancock Avenue in Ward 2 of Athens, Clarke County, Georgia. His parents had been married for 18 years; his mother had seven children, all of which were living. His father was a dealer in stock, probably horses. He and most of his siblings were in school; only little Sarah was still too young at age four to attend school yet. There were four other people living in the home—three were boarders named W. O. Cheney (age 16), Roy Cheney (age 19), and Luther Tolbert (age 26) and a 12 year old black girl named Elsie Hull who was a servant. Six months after this census was taken, Reeves was involved in a serious accident in Athens. The Augusta Chronicle carried the story on January 30, 1901:


(Special to "The Chronicle.") Athens, Ga., Jan. 29.—Yesterday afternoon, Reaves, the 16-year-old son of Mr. and Mrs. James Cheney, happened to a painful and serious accident. He was driving in a buggy down Lumpkin street hill when his horse took fright and ran away. Reaves was thrown from the buggy and badly bruised, and was in an unconscious condition when discovered. He lay all night under the influence of opiates and is in a serious condition. The buggy was pretty well demolished. Today young Cheney’s condition is somewhat improved.

By 1906, Reeves had moved to Atlanta where he lived at 126 West Cain Street. He had taken a job as a traveling salesman for A. C. Woolley and Company, an egg food dealer on North Forsyth Street in Atlanta. By 1908, Reeves had moved to 119 East Georgia Avenue. And then something tragic happened, resulting in the death of Reeves in Atlanta on July 8, 1908.

I haven’t been able to figure out what the cause of death was so say “tragic” simply because Reeves was only 24 years old. A funeral service was held at his home the next day, officiated by Rev. John E. Briggs, pastor of the Capitol Avenue Baptist Church there in Atlanta. Local area undertakers Greenberg, Bond & Bloomfield’s took care of the arrangements. Reeves was taken to Bairdstown Cemetery in Bairdstown, Oglethorpe County, Georgia for burial.

Today, there are at least 22 members of the Cheney family buried at Bairdstown Cemetery.