Carl Edwin Jackson, son of Enos “Perry” Jackson and Anna B. Church, was born on July 23, 1910 in Smithfield, Wetzel County, West Virginia. Carl had an older brother named Otto Virgil Jackson, born in 1906. Carl is a 1st cousin 1x removed of my husband Charles. Their nearest common relatives are Robert Church and Lucinda Murphy who were married on April 2, 1876 in Wetzel County.

The 1910 census was taken at the Jackson home on April 25, three months before Carl’s birth. That census record tells us that the family home in Smithfield was on Hayes Street in the Grant District of Wetzel County. His father was a salesman in a general store (Dragoo Brothers) and they had a boarder named David Ringer (age 53, widowed, born in Pennsylvania) living in the home with them. His mother was 23 years old and his father 31 years. Sometime before 1918, Carl’s parents divorced, an assumption I make based on the fact that his father’s World War I registration card dated September 12, 1918 listed Virgil Jackson as his nearest relative. Sometime between 1918 and 1920, Carl’s mother Anna married Everett Franklin Evans, son of William and Jane Evans.

On January 15, 1920, Carl was living with his father Perry and brother Virgil in Smithfield, Grant District of Wetzel County. His father was still a salesman in a general store. This census record notes that Perry was widowed, however, we know that his ex-wife Anna was still alive and I haven’t found another marriage record for Perry. On June 22, 1924, Carl’s mother gave birth to a premature baby boy they named Everett Franklin Evans Jr. Complications must have occurred and Baby Everett died on June 30, surviving for only nine days. He as buried at the Masonic Cemetery in Clarksburg, Harrison County, West Virginia on July 1.

On April 3, 1930, Carl was still living in Smithfield with his father and brother Virgil. This census record shows that his father Perry was divorced, not widowed. The house they lived in was owned by Perry, had a radio, and was valued at $600. Perry still worked at the general store, Virgil was a laborer with an oil company, and Carl was not working. Wedding bells rang for Carl on February 6, 1938 when he married Pansy Virginia Burdine, daughter of Lewis Fountain Burdine and Lovie Mae Haught, in Wetzel County. Carl and Pansy set up house in Smithfield. Their daughter Sandra Sue Jackson was born in November of that year.


On April 10, 1940, Carl and his family lived in Smithfield. He worked for the South Penn Natural Gas Company as a rouster. A third child was born about 1942, named James Jackson. On April 5, 1945, Carl went to Huntington, West Virginia and enlisted as a private in the World War II draft. His registration noted that he had a grammar school education. Carl was still working at the gas company. His wife Pansy was listed as the person who would always know his address. They were still living in Smithfield at the time. He was 30 years old.


Just a month after Carl’s trip to Huntington, his wife Pansy gave birth to their daughter Marilyn Elaine Jackson. Sad times were ahead for Carl and his family before the decade came to an end. Of course, I don’t know the circumstances, but with Carl having lived with his father after the divorce, I imagine they had a close relationship. This had to make it harder when his father Perry died in Smithfield at the age of 72 after a brief illness on September 19, 1948. Perry was buried at the Barker Cemetery in Pine Grove, Wetzel County, West Virginia.

Sometime in the 1950s, Carl and Pansy left Wetzel County and moved to Clarksburg. In the late 1950s, they lived in a duplex located at 647 West Main Street, not far from downtown Clarksburg. They later moved to an apartment building at 808 Locust Court. During this time, Carl worked at the MP Company which I believe was the Monongahela Power Company. One Clarksburg city directory notes that he worked as a groundsman there. Carl’s mother Anna died in Weston, Lewis County, West Virginia on March 29, 1959. She was buried at Greenlawn Cemetery in Clarksburg. Still in mourning, Carl and Pansy celebrated the marriage of their oldest daughter Sandra to Frederick Riley Knapp, son of Virgil B. Knapp and Iona Clifton, in Harrison, West Virginia on July 18, 1959. 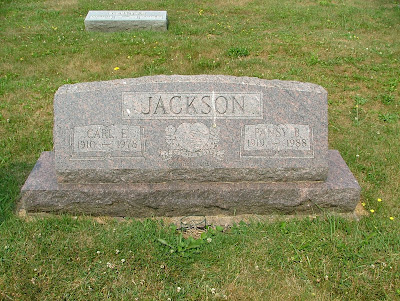