Annie Armstrong, daughter of James Armstrong and Mary Caroline (Carrie) Edmondson, was born on July 19, 1860 in Georgia, most likely Penfield, Greene County. She had an older sister named Harriett Eliza Armstrong who was born in 1857. Annie’s connection to me is distant, but it’s there—she’s the wife of husband (Thomas B. Wilson) of sister-in-law (Evie Lena Stephens) of 1st cousin (Warren Andrews Mullins) of husband (Robert Dawson Callaway) of great grandmother (Alice Beman Lankford). Whew, I think I got that right! Annie and I have no common relative.

Annie’s mother was a little over a month from giving birth when the census was taken in 1860 so she wasn’t counted when the census taker came through Penfield on June 4. But according to that census record, her father James was a merchant with real estate valued at $1800 and a personal estate valued at $2000. A search of historical newspapers shows that James and Joseph P. Wilson owned a dry good business together in Penfield, an important business in the community. Dr. Frank Durham and his wife Sarah lived with the Armstrong family in their home located on Main Street. 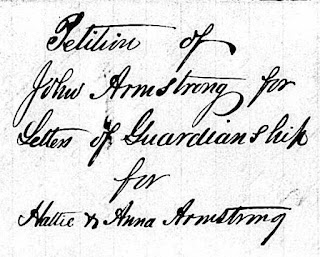 When the Civil War began in 1861, Annie’s father joined other men from Penfield, including my 3rd great-grandfather James Meriweather Lankford, and mustered in with Company C (Dawson Grays) of the Third Regiment, Georgia Infantry. James wouldn’t come home to his family though—he was killed on May 3, 1863 during the Battle of Chancellorsville in Virginia. His body was brought home to Greene County at some point and buried at Woodville Cemetery in Woodville, not far from Penfield. James left an estate valued at approximately $9000. After his death, the house and lot were sold to pay his debts. Annie’s mother was given an allowance of support and maintenance for 12 months for herself, Hattie, and Annie, who were both minors. Two years after James’ death, Annie’s mother married her husband’s brother, John Armstrong, in Greene County on November 16, 1865. Carrie and John had two children together, Sarah (Sallie) Armstrong and James H. Armstrong. Within two years (May 7, 1867), John filed a petition for letters of guardianship in Greene County for Hattie and Annie.

On June 15, 1870, the Armstrong family continued to live in Penfield. Annie’s step-father John worked as a farmer with real estate valued at $2500 and a personal estate worth $500. Her mother, enumerated as Mary C. Armstrong, was keeping house; Annie was enumerated as “Anna” and her sister Sarah as “Sallie.” In mid-February 1875, Annie’s father John was diagnosed with paralysis. The Greensboro Herald reported his illness on February 18, 1875:


Sad Affliction. We are pained to learn that Maj. John Armstrong, residing near Bairdstown, Ga., was stricken with Paralysis, last week, and is still in a precarious condition. We trust he may be spared to his friends and his county.

Annie, her mother, and sister were dealing with John’s illness when the family suffered a terrible loss–the death of Annie’s mother at home near Bairdstown, Oglethorpe County, Georgia on April 22, 1875. Carrie’s death was reported in The Greensboro Herald on April 29, 1875:


Died. We are pained to announce the death of Mrs. Carrie Armstrong, wife of John Armstrong, Esq., which occurred on last Thursday evening at the residence of her husband, near Bairdstown. Mrs. Armstrong was a most estimable woman, and her death creates a vacuum in the family circle and the community which can not be filled.

Less than two months after Carrie’s death, Annie’s step-father John lost his battle with paralysis, which was reported in The Greensboro Herald on June 17, 1875:


Death. It becomes our painful duty to chronicle the death of John Armstrong, Esq., which occurred at his residence, near Bairdstown on last Saturday, after a protracted illness of Paralysis. Mr. Armstrong was an intelligent, hightoned gentleman, and in his death the county sustains a serious loss.

A second article appeared on the same page that day:


The county and the Bairdstown community sustain a serious loss in the death of John Armstrong, Esq., which occurred last Saturday evening. Only a few weeks ago, a large cortege of mourners followed the remains of his wife to her last resting place. It is truly a bereaved family.

At some point after the death of Carrie and John, William R. Wilson was appointed a guardian to 14-year-old Annie. William was either her grandfather or uncle, I’m not sure which. On December 22, 1875, Annie’s sister Hattie married Robert E. Davison, son of James McCluney Davison Sr. and Margaret Moore. The Davison’s were a prominent family in Greene County. Robert, known as Bob to family and friends, would eventually become prison commissioner for the state of Georgia. Prior to that, he was named guardian for Sallie and James.

At the age of 16 years, Annie married Thomas B. Wilson, son of William Ralph Wilson and Mary Frances Edmondson, in Greene County, Georgia on January 18, 1877. Thomas was 19 years old.


By the time Annie reached the age of 19 years, she had given birth to two children, a daughter named Annie Lee Wilson in September 1877 and a son named James Lamar Wilson in August 1879.

On June 9, 1880, Annie and her family lived in the 138th district of Greene County, Georgia (I believe Woodville). She was keeping house while Thomas farmed to support the family. Little Annie was two and James nine months. A 14-year-old mulatto girl named Harriet Langsten, a cook, and a 14-year-old black boy named Harry McCommon, a laborer, were living in the home at the time. In 1882 when Annie was 22, paperwork was filed to dismiss her guardianship. She gave birth to her third child, a son they named Thomas Walter (or Walker) Wilson, in November 1883.

The next decade began joyfully with Annie giving birth in May 1890 to a fourth child they named Eva J. Wilson. The decade ended in sorrow with Annie’s death of unknown causes at the age of 38 years in Georgia on June 3, 1899. Annie was buried at Bairdstown Cemetery in Bairdstown. 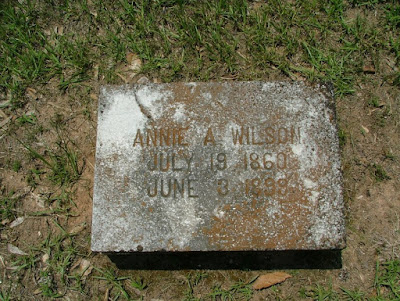 Her will was filed on July 5, 1899 in Greene County by James H. McWhorter, Ordinary. She asked that Thomas C. Davison act as her executor, and that he do so without bond. Thomas was the brother of Hattie’s husband Robert. In her will, Annie asked that her estate be kept together and managed by her executor until her daughter Eva became of age or married. She further asked that Eva have a “good English education” and that Walter “go to school less years beginning in 1900” and that the cost be paid out of her estate. She asked that her sister Hattie control and raise Eva. After Eva married, Annie requested that the remainder of her estate be equally divided between her husband and children, share and share alike. Annie must have known she was dying when her will was written—she signed it on May 25, 1899. She died on June 3.