Gerald’s family story is a sad, tragic one. In June 1954 when he was six years old, the family left their home in Monroe, Walton County Georgia, on their way to Bonita Springs, Florida. They were all looking forward to a visit with family and a week of fishing. A little over two hundred miles into the trip, their car was involved in a head on collision. Both of Gerald’s parents were critically injured and rushed to Waycross Hospital in Georgia. His mother was placed on the critical list, his father died at 9:30 a.m. on June 21. Neither Gerald or his brother Jackie were injured but were both “badly shaken up.” His father’s remains were brought home for burial in Georgia on June 23. Gerald’s father was only 35 years old.

Just over a year later, Gerald and his mother were both killed when their car was struck by a train in Auburn, Barrow County, Georgia on October 1, 1955. Gerald was only 8 years old and his mother 31. 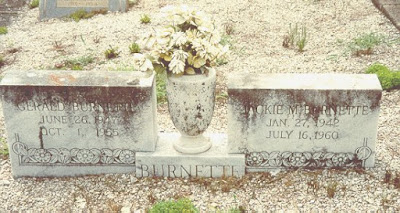 And if the death of Gerald and his parents weren’t bad enough, his brother Jackie, the last surviving member of this Burnette family, died in a car accident in Winder, Barrow County, Georgia on July 16, 1960. He was just 18 years old.

The entire family, gone in six years. Gerald, his parents Ralph and Vinelle, and his brother Jackie were all buried at Mount Vernon Christian Church Cemetery in Monroe. 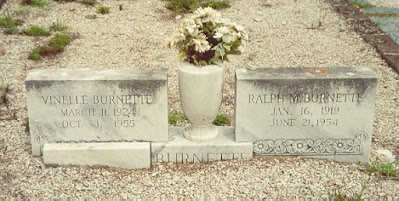