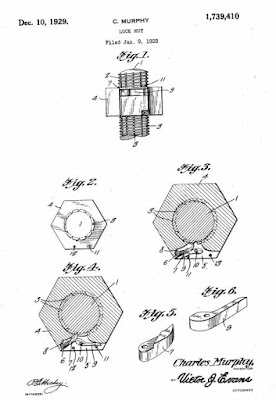 Deb Ruth, a blogger in the Genealogy Bloggers group I belong to on Facebook, recently posted Family Inventor ~ Google Patents on her blog Deb's Adventures in Genealogy. After reading her post (thank you Deb), I decided it was time to highlight the patent granted to my husband’s grandfather, Charles Homer Murphy, of Littleton, Wetzel County, West Virginia.

At a family member’s funeral in 2012, a cousin handed my husband an envelope saying he thought Charlie would be interested in having what was inside. When Charlie opened the envelope, he discovered two heavily damaged copies of a patent granted to his grandfather and namesake, Charles H. Murphy, in 1929. This was the first time Charlie had ever heard about the patent.

“This invention relates to lock nuts, and its general object is to provide a bolt including a nut that is normally retained in a position whereby it can be threaded on and off of its bolt by a wrench or the like, or can be secured against movement in either direction.

A further object of the invention is to provide a lock nut that is positive in function, simple in construction, inexpensive to manufacture and efficient in operation and service.

This invention also consists in certain other features of construction and in the combination and arrangement of the several parts, to be hereinafter fully described, illustrated in the accompanying drawings and specifically pointed out in the appended claim.” 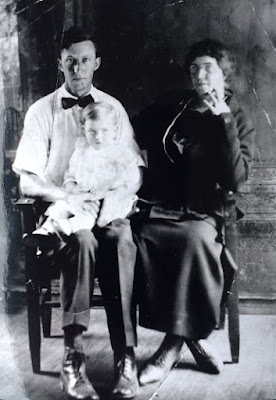 The U.S. Patent and Trademark Office granted patent number 1,739,410 to Charles on December 10, 1929 with an anticipated expiration date of December 10, 1946. To our knowledge, the patent was never extended. Since 2004, Charles’ patent has been cited by three other patents.

Charles’ World War I draft registration card filed in 1918 listed his occupation as “helper on tools” for the South Pennsylvania Oil Company. In 1930, he worked as an operative at an oil company. He obviously worked in an industry that would have used lock nuts and wanted to do something to possibly improve them.

By the time his patent was granted, Charles was 43 years old, married, and the father of five children. He never had a lot of money so must have felt strongly about his invention to be willing to pay attorney fees to file the application.

The photo above was probably taken around the same time Charles filed the application. His wife Dessie (Church) Murphy is to his right. We believe the child is my father-in-law, Earl Murphy.