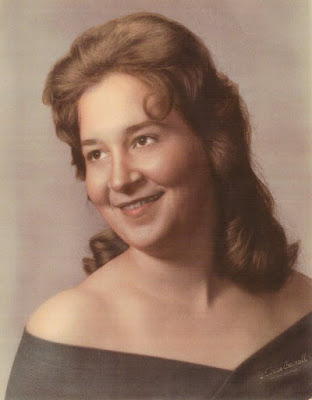 Alice’s mother was previously married (in 1916) to Frank P. Parton and they had a daughter named Mabel (May) Barker in 1918. Before I can go further, I have to tell you about a date discrepancy I found. Frank died of pulmonary tuberculosis in Charleston, Swain County, North Carolina on either April 13 or November 10, 1921. I say either because his death certificate shows his death date as November 10, 1921 and his wife as Mary Parton. However, Frank’s U.S. Headstone Application shows a death date of April 13, 1921. I also found a North Carolina Historical Records Survey for Jackson Line Cemetery that shows his tombstone is inscribed with the date April 13, 1921. Unfortunately, Frank’s death is not recorded in Find A Grave so no tombstone photo, nor do I find an obituary for him. Marriage records show that Mary and Thaddeus married in Swain County on August 23, 1921. So, either Mary divorced Frank before August 23 or he actually died in April and she remarried in November. I do note that it appears Frank’s death certificate may have been filed on September 26, 1930, almost nine years after his death. Why was that and could this have caused the date discrepancy? It’s very confusing. If I’ve gotten this all wrong, someone please correct me!

On April 29, 1940, three-month-old Alice and her family lived in the Charleston Township of Swain County, North Carolina. Her father was a farmer and her brother Marvin a farm laborer. They had been in the same house since at least 1935 and only five of the six children lived in the home on that day. Mabel, no longer living with the rest of the family, would have been 21 years old so was probably married.

I found a surprise when researching my Aunt Alice—she had apparently been married three times before her marriage to my uncle—not that there’s anything wrong with that. It’s just something I didn’t know. The U.S. Social Security Applications and Claims Index includes the following notes:

So, if this is correct, this means she would have married a Mr. Gentry about March 1956, a Mr. Sullivan about September 1962, and a Mr. Cooper about January 1970. When her mother died in March 1955, she was listed as Alice Barker in the obituary.

When Alice’s father died in April 1967, she was listed as Mrs. Alice Gentry of Atlanta in his obituary.

The marriage to Mr. Cooper would have been short-lived though as Alice married my uncle Clark Eugene Lankford, son of Carroll Harvey Lankford and Floria Mae Burnette, in Atlanta, Fulton County, Georgia on July 20, 1970. At some point after their marriage, they moved to Alpharetta, Fulton County, Georgia and later had twin daughters. My sister Jennifer remembers she and Mama stayed with Uncle Clark in the waiting room at the hospital the night before the twins were born. Jennifer and Mama left early the next morning, probably so Mama could go to work. Of course, by the time they got home, Uncle Clark was calling to tell them the twins had been born right after they left the hospital. When the twins were about two years old, Mama was planning an overnight trip to Tennessee to visit relatives. She remembers Clark called and asked if she could help him give Alice a break and take her to Tennessee. Mama said they had a nice time and Alice got a break from the overwhelming job of raising two toddlers. My cousins are very private so to respect their privacy, that’s all I’ll have to say about them here.

Alice was a homemaker during her marriage to Clark. They kept a large garden in their back yard. Mama remembers going to their house in Alpharetta to help cut corn off the cob for freezing. I believe she also helped take care of someone’s cows when they lived in Alpharetta, although I don’t remember the circumstances. I do remember she had a big collection of cows spread around her house though. She also collected rocks and had baskets of them as well as surrounded her flower beds with rocks.

About 2001, Alice and Clark sold their Alpharetta home and moved next door to Daddy in Riverdale, Clayton County, Georgia. Alice and Daddy had a love-hate relationship—they fought all the time. But they loved each other and they all three watched out for each other. Alice and Clark kept up the gardening in Riverdale which would have been something for Alice and Daddy to bond over. He loved gardening and always had a yard full of vegetables and flowers.

Alice had a heart attack the week before her death and suffered complications. At age 64, she died on January 29, 2004 at Piedmont Hospital in Atlanta—17 years ago today. It was her sister Ruth’s birthday. A graveside service, officiated by my Uncle Lawrence Griffith took place at Bairdstown Cemetery in Bairdstown, Oglethorpe County, Georgia on February 1. She was survived by my Uncle Clark, their daughters, her sister Ruth, and brother Edward. 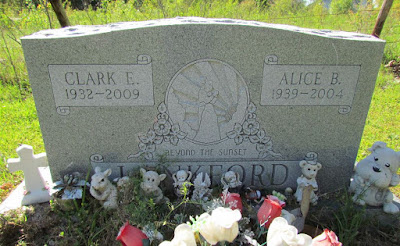 Thinking of you with fond memories today Aunt Alice.