Last week I wrote about a new photo I found of George Durie Athya, my husband’s grandfather. But that wasn’t the only new piece of information I discovered in my random Athya search. I also found the birth date of George’s nephew, James Athya. Having previously written about James, I had done extensive research on him but had been unable to find his birth or death dates. But as we know, new records are posted all the time, so it pays to keep looking. In this case, it was James’ World War II draft registration card that provided his date of birth, as well as several other clues.

James’ registration card, dated October 16, 1940, shows he was born on October 3, 1919. It also shows his place of birth as Steubenville, Ohio, not Bellshill, Scotland. The records aren’t always correct, even when filled out by the person themselves. 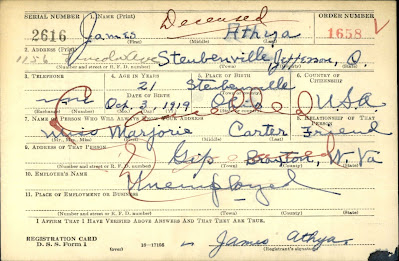 We know James sailed on the S.S. Transylvania with his father Robert, sister Margaret, and brother Robert Jr. The Transylvania left Glasgow, Scotland on June 6, 1930 and arrived at Ellis Island in New York on June 15. The ship manifest shows that James was born in Bellshill, not Ohio.

Other clues on James’ registration card include:

There is still much to learn about James, mostly when he died and what caused his death at such a young age. I’d also like to learn more about his adventures with the carnival. I’ll keep looking.