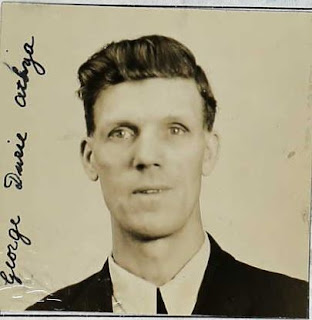 I’ve been playing with Athya, my elf on the shelf for the past month so have Athya on the brain. This led me to spend some time last weekend randomly researching “Athya” on Ancestry.com. I’m glad I did because in the process, I got a hit for George Durie Athya’s Declaration of Intention form filed in April 1933. I’d previously found George’s Petition for Citizenship but if this form was included, I missed it. George is my husband’s grandfather who immigrated from Glasgow, Scotland to the United States in 1920. We have several immigration records for George so I already had all the information included on the declaration form but was happy to see it included a photo we’d never seen before. The declaration form also included a very good signature for George.

To read more about George Durie Athya, click on the links below:

Email ThisBlogThis!Share to TwitterShare to FacebookShare to Pinterest
Labels: Athya