James Stephen Cheney, son of Enoch Reeves Cheney and Sarah Haseltine English, was born in Georgia on September 18, 1860. James’ parents lived in Woodville, Greene County on June 9 so he was probably born there. James was the third child of six—William Henry Cheney, Anna Irene Cheney, James Stephen Cheney, Mary E. Cheney, Enoch Callaway Cheney, and Charles English Cheney. Although we have no common relative, I’m actually connected to James in two ways, both through my 3rd great grand uncle, Robert Chester Lankford who was the brother of my 3rd great grandfather, James Meriweather Lankford:

My connection to James is probably the most unusual so far.

By 1860, James’ father Enoch had obtained real estate valued at $4000 and a personal estate valued at $8000. He was doing well. Enoch and Sarah lived two houses from my 3rd great grandparents, James and Caroline (Hobbs) Lankford in Woodville. James was a baby when the Civil War began in 1861 and his father joined as a private in Company C of the Third Georgia Infantry (Dawson Grays) C.S.A. with my 3rd great grandfather, James Lankford. Enoch was promoted to corporal in 1863 and wounded at Malvern Hill in Manassas Gap, Virginia. Scary times for the Cheney family.

On June 23, 1870, James and his family lived in Penfield, Greene County, Georgia. His father was a farmer with real estate valued at $1800 and a personal estate valued at $1200. James’ mother was keeping house, his brother Henry a farm laborer, and sister Anna in school.

On June 5, 1880, James and his family lived in District 138 of Greene County, Georgia. His parent’s occupation remained unchanged since 1870, farmer and keeping house. Sister Anna, now 24, was teaching school and James, now 20, followed in his father’s footsteps and was also a farmer. His sister Mary and brother Enoch were both attending school.

At some point after their marriage, James moved his family to Athens, Clarke County, Georgia. As a business owner, James became active in the community and was elected an alderman. By 1897, he was considered a “senior alderman” as referenced in an Athens Daily Banner article published on December 10:

Alderman J. S. Cheney. James S. Cheney is the senior alderman from the first ward. He is now serving his second term in that office, having been re-elected last year. He is a livery stable owner and a progressive young business man. As chairman of the fire department committee he has looked after the affairs of the department most carefully. He also has done good work on other committees and in the general work in behalf of the city.

On June 6, 1900, James and his family lived on Hancock Avenue in Athens. He and Emily had been married for 18 years. Emily was enumerated as having had seven children, all of which were living. James worked as a dealer in stock. With the exception of the youngest child, Sarah, all were attending school and able to read and write. A 12-year-old black female named Elsie Hull, a servant, lived in the home. There were also three white males living in the home. Two were probably extended family members—W. O. Cheney, age 16 and at school, and Roy Cheney, age 19 and working as a telegraph operator. The third male was a 26-year-old male named Luther Tolbert who was a grocery store salesman. A year later, the family celebrated the July 1901 marriage of daughter Tallulah. The Atlanta Constitution published the marriage announcement on July 19, 1901:

James’ father Enoch died on March 21, 1902, most likely in Bairdstown, Oglethorpe County, Georgia. He was buried at Bairdstown Cemetery in Bairdstown.

I found four news articles that provide snippets of information info James’ life. The first was published by the Athens Daily Banner on May 14, 1902. Mr. Maddox, referenced in the article, was from Greensboro so it’s possible James knew him or his family.

Negro Walks Many Miles: Decrepid Darky Picked Up Here Yesterday. An old, decrepid and footsore negro named Madison Maddox, straggled into the city late Monday night and made his way to the home of Sanitary Inspector Cheney, on Jackson Street. The old negro had walked all the way from Greensboro to Athens and had completely collapsed when he reached Mr. Cheney’s home. He had had but little to eat during the five days which his journey required, and the sun had almost blistered his face and hands.

The old man lived in Hoschton and had left there with $1.00 to get to Greensboro to see his children. From there he had set out to make his way back home and he managed to reach this far.

He was given a bed and food and yesterday the mayor furnished him a ticket as far as Winder over the Seaboard.

The second article, one sentence in a larger article published by The Athens Banner on December 20, 1902, tells us that James was no longer an alderman and that he in fact was a sanitary inspector:

The Steady March of Progress Made by the City of Athens. … Mr. James S. Cheney, an ex-alderman is sanitary inspector and during his term of office has rendered valuable service to the city. …

A third article, published by The Athens Banner on January 2, 1903, provides information related to James’ dealings in stock:

A Lot of Fine Horses Received. Messrs. James S. Cheney and B. C. McWhorter, who have formed a partnership in the stock business, have just received a lot of fine horses which they will sell at prices that will astonish the purchasers. These horses are now at Carlton’s stables on Jackson street.

Mr. Cheney is one of the most experienced stock men in Athens, and Mr. McWhorter, who comes to Athens from Greensboro, and who will soon move his family here, has also had years of experience.

They are judges of good horses if there are any judges in Athens, and it will pay any prospective purchaser to call on them at once.

A fourth article, published in The Athens Banner on November 23, 1905, tells us that James started working at the Holman Deadwyler Company:

Mr. Cheney invites his friends to call on him when in need of horses or mules, and assures them of the best of treatment.

A tragic event took place in Atlanta, Fulton County, Georgia on July 8, 1908 when James’ son Reeves died suddenly at the age of 24. Reeves was buried at Bairdstown Cemetery after a service held at Capitol Avenue Baptist Church in Atlanta on July 9.

By April 15, 1910, James had made another move and now lived in a rented home on Crew Street of Ward 2 in Atlanta. James and Emily had been married for 28 years. Emily was enumerated as having had seven children, six of which were living. Only five children were still living in the home—Lee, Frank, Eva, Florie, and Sarah. As we know from the 1903 news article above, James was a stock dealer in horses. Lee must have been working with his father as he was a horse salesman. Frank sold tickets at the railroad office and daughter Eva worked as a real estate stenographer. James’ teenage daughters, Florie and Sarah, were both attending school.

Sadly, all was not well for James. Apparently suffering from acute alcoholism, James died in Atlanta on August 16, 1912. He was buried at Bairdstown Cemetery the following day. The Atlanta Constitution published a news article on August 17 (with an incorrect middle initial):

J. W. Cheney, Bairdstown. Athens, Ga., August 17.—(Special.)—Quite a number of Athenians went to Bairdstown today to attend the funeral of J. W. Cheney, a former citizen of this place, and for some years a member of the city council here, whose death occurred in Atlanta yesterday. He was a brother-in-law of Judge C. T. Young, and the father of Mrs. A. C. Hancock, of this city. 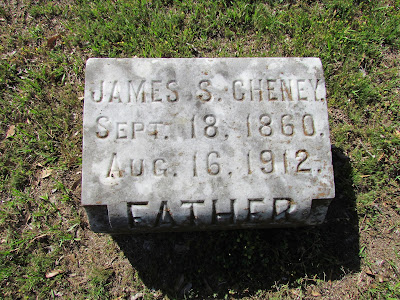 Like the earlier news articles, these provided small snippets of information into James’ life.