George Durie Athya, the son of James Athya and Jemima Durie, was born at 2:15 p.m. on June 26, 1892 at Academy Square in the District of Bothwell, Lanark County, Mossend Scotland. His birth was registered by William M. Nab on July 18, 1892. It’s believed that James and Jemima had at least 10, possibly more, children but only eight have been identified—Margaret, Elizabeth, Isabella, Robert, John, George, David, and Mary. Both George and Robert shared their mother’s maiden name as their middle name. George was my husband’s maternal grandfather.

George, a member of Scotland’s Black Watch, served in the 324 H.S. Coy, Labour Corps. He was first posted to the Queen’s Own Cameron Highlanders where he reached the rank of Corporal. He enlisted in Glasgow, Scotland on March 15, 1909 and served during World War I along with his brothers, Robert and David. George and Robert made it through the war; however, David was killed in action. Family history is that David most likely died in the second Battle for Ypres standing in a Belgium trench between his brothers. George was discharged on June 3, 1919 as being surplus to military requirements after having suffered impairments since entry into the Service. He had served for 9 years and 357 days with the Colours. George was awarded the Victory Medal, British War Medal, and 15 Star Medal for his service in France. He had also spent time in India and Egypt.

George was a member of the Rutherglen Royal Arch Lodge in 1920. He was also a Mason.

On May 11, 1920, George was issued passport number 132439 and immigrated to America on the ship Columbia. He departed from Glasgow, Scotland and arrived at Ellis Island New York on November 9, 1920. George paid for his passage to America himself. This was his first time in the United States where he was joining his sister, Mrs. Margaret (Athya) Close of Pleasant Heights, Steubenville, Jefferson County, Ohio with the intention of staying permanently. He was in good health at the time of his arrival. The ship manifest shows that he had tattoo marks on both arms and that he was born in Mossend, Scotland. Family members have told me the tattoos were a snake, a ship, and a sunrise.

From George’s Naturalization papers: I, George Athya, aged 28 years, occupation Mill worker, do declare on oath that my personal description is: Color White, complexion Dark, height 5’ 10”, weight 130 pounds, color of hair Dark Brown, color of eyes Blue, other visible distinctive marks Tattoo marks on both arms. I was born in Mossend, Scotland on the 26th day of June, anno, Domini 1892; I now reside at 641 Grandview Ave. Steubenville, Ohio. I emigrated to the United States of America from Glasgow, Scotland on the vessel “Columbia;” my last foreign residence was Glasgow, Scotland; I am married; the name of my wife is Mary; she was born at Bellshill, Scotland and now resides at Bellshill, Scotland. It is my bona fide intention to renounce forever all allegiance and fidelity to any foreign prince, potentate, state, or sovereignty, and particularly to George V. King of Great Britain and Ireland, of whom I am now a subject; I arrived at the port of New York, in the State of New York, on or about the 11th day of November, anno Domini 1920; I am not an anarchist; I am not a polygamist nor a believer in the practice of polygamy; and it is my intention in good faith to become a citizen of the United States of America and to permanently reside therein: So Help Me God.

I once asked my mother-in-law what happened to Mary, the wife George left behind in Scotland. She told me they didn’t know. George married Bertha Edna Smith, daughter of John Milton Smith and Amanda Larimer Horne, on June 14, 1924 in Pittsburgh, Allegheny County, Pennsylvania.

George’s nephew, James Close, died in Steubenville in February 1925. George was the informant on his death certificate.

George and Bertha lived in Paulton, Washington Township, Westmoreland County, Pennsylvania in April 1930. They had three children—John, Howard, and Mary. George’s birthplace is incorrectly listed as Pennsylvania on census records. His parents are correctly listed as being born in Scotland however. His occupation was Heater in a Steel Mill. By June 1930, the family had moved to Apollo, Armstrong County, Pennsylvania and son James was born. George and his family lived at 213 South 4th Street in Apollo.

George submitted an application for a social security number on November 27, 1936. He was 44 years old when he filed. George was a steel worker working for the Committee for Industrial Organization located in Pittsburgh, Pennsylvania. As a union organizer, George wasn’t happy when his daughter married someone who didn’t care for unions. They avoid each other for the most part until they all got drunk one night and George finally invited his future son-in-law into the house. Things were okay after that.

George didn’t spend much time with his children. When not working, he could be found at one of his favorite Apollo hangouts—the Mosey Inn—a beer house along the Kiskiminetas River. When he did spend time with them he would teach them to read maps. 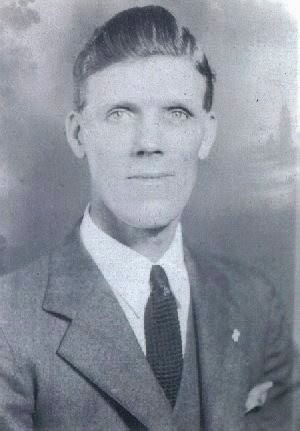 George lost two houses while living in Pennsylvania. One, a brick house, was lost to taxes. Bertha’s Aunt Electra Smith Jack lived with them for a short time in this house. The second house, located on Cherry Lane near Apollo, was lost to the Kiskiminetas River. George built this house himself. While building the house, the family lived part of the time in a house in Paulton with Bertha’s mother, Amanda Horne Smith. When not living in that house, they lived in the Apollo 4th Street house which was owned by Bertha’s brother, Benjamin Smith. Ben did not live with them however. In 1940, George, Bertha, and the children shared this house with Josephine Horne, Bertha’s aunt. George was almost finished with the house when the Kiskiminetas River flooded. All he had left to do was paint and install the electrical fixtures. The river flooded and took the house downstream where it crashed into a bridge. His daughter Mary said the house still had the recently purchased paint and electrical fixtures in it when it was destroyed. Mary also recalled a neighbor telling them what a pretty house it was as it headed down the river. After this house was destroyed, the family lived with Amanda Smith, who was bedridden from a stroke. Amanda died shortly after the Athya family moved there. George and Bertha then moved the family to Warren, Ohio. Their oldest son John, the high school valedictorian that year, lived with Uncle Ben until graduation. Jim lived with Bertha’s brother, George Smith and his wife Verda. Howard went to Warren, Ohio with his parents. Mary stayed behind with a neighbor named Honey Flippin so she could participate in the 8th grade graduation ceremonies with her class. She lived there for approximately one month. John, Jim, and Mary eventually joined the family in Warren. George and Bertha were still living in Warren in January 1949 when his brother Robert died.

For health reasons, George and Bertha took a two week vacation to Phoenix in 1953. The doctor told Bertha it would be good for her. They ended up staying there after George called work several times to ask for more time off. George’s Arizona driver’s license shows that he weighed 129 pounds, one pound less than when he first came to America in 1920. When his license was issued on June 24, 1963, he lived at 1829 W. Pierson in Phoenix. George wore glasses.

﻿﻿﻿
Once moving to Phoenix, George worked as a church caretaker at two different churches—First Presbyterian and then Westminster. George and Bertha lived next door to one of the churches although I don’t know which one. He was paid $100 per month and of that, $50 was used to pay rent. He and Bertha lived off the other $50 for a while until he started receiving a Social Security check. George read the Bible often and he loved to grow flowers.

Mary, her husband, and daughter moved to Phoenix the summer of 1955. They lived with George and Bertha for a year before returning to the East coast. By that time, they had added a son to the family.

At the age of 72, George died of lung cancer in Phoenix on August 30, 1964. His funeral was held on September 2, 1964. He was cremated and his ashes scattered in the Scattering Rose Garden (section 48) at Greenwood Memory Lawn Cemetery in Phoenix. Family members have made three attempts to take a photo of his marker. All three times the photo was blurry. Seems to me George Athya doesn’t want that photo taken!

After George’s death, Bertha moved to back to Warren, Ohio.
Posted by Denise at 9:03 PM