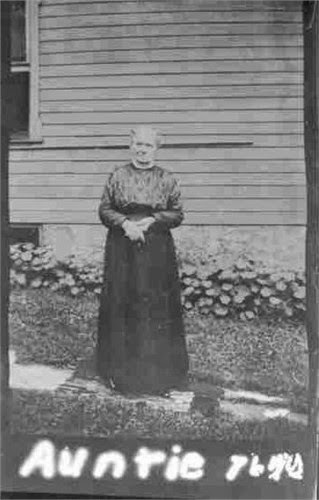 Electra Burnette Smith, the daughter of John Thompson Smith and Jane Gordon, was born on February 11, 1841 in Apollo, Armstrong County, Pennsylvania. She was the oldest of six children—Electra, Erastus C., Eunice Alvira, Martha Jane, Minerva, and John Milton Smith. Electra also had half-siblings from her mother’s first marriage to John McIlwain—Margaret, James Xenophon, Eva, and John S. McIlwain. Her name was sometimes written as Erecta. She went by the nickname Lec.

Sadness came into Electra’s life early when her one year old sister, Minerva, died in Apollo on May 17, 1850.

Nine year old Electra lived with her family in Apollo on November 7, 1850. Her 20 year old half-sister Margaret and 14 year old half-brother John lived in the home as well.

Apollo’s First Presbyterian Church register shows that Electra was admitted to the church on October 8, 1858 by Escamination. She was baptized and received full communion as an adult on October 10, 1858. Electra was listed as Miss Electa Barnet Smith in the registry.

On July 5, 1860, an 18 year old Electra still lived at home. Her occupation was Laborer. Mostly likely, she worked in her father’s inn. John Smith was one of the local innkeepers. His inn was on the corner of North and Canal Streets in Apollo.

Electra and her half-brother, James Xenophon McIlwain, often corresponded during the Civil War. A McIlwain family member who has copies of many of these letters surmises that Electra had feelings for Samuel Stewart, a member of James’ company. Sam Stewart was killed at the Battle of South Mountain in September 1862.

Death comes to the Smith home again on March 11, 1864 when Electra’s father died.

On June 24, 1870, Electra is still living at home in the Kelly’s Station section of Apollo. She’s 29 years old. The only other sibling in the home is her 19 year old brother, John. Thomas K. McBride, a 21 year old physician, is living with Jane, Electra, and John. Jane’s occupation is “Keeping Boarding House” so one would assume that Electra and John are helping their widowed Mother run the inn.

On June 23, 1880, Electra and her brother, John, were living together in Apollo. She was 39 years old and keeping house. No one else is living in the home with them. Electra is head of the household.

Four years later on March 19, 1890, Electra’s sister, Eunice Alvira Smith Jack, died in Apollo leaving six children behind for her husband Daniel Jack to raise alone—three under the age of 18.
On February 20, 1896 at the age of 55, Electra married Daniel Jack in Apollo. Daniel, the son of Samuel Smith Jack and Catherine Beck, was her sister Eunice Alvira Smith Jack’s widowed husband. This was a first marriage for Electra and second for Daniel.

The 1900 Apollo census shows that Electra had been married four years to Daniel. She had no children according to this census record.

The 1910 Apollo census shows that Electra has been married once, 14 years to Daniel. She had no children according to this census record.

The book “From 1816–1916: History of Apollo Pennsylvania—The Year of a Hundred Years,” written by T. J. Henry, M.D. and published in 1916 by The News-Record Publishing Company in Apollo acknowledges Electra’s (and others) contributions for “information furnished from memory’s stores” in the book’s Foreward. She also has a personal mention on page 89—“Mrs. DANIEL JACK (nee SMITH), is the oldest native inhabitant of Apollo.

The 1920 Armstrong County census shows that Electra can read and write. There is a woman named Margaret Hunter living with Daniel and Electra. Margaret’s occupation is housekeeper; she is single and 20 years old. In an affidavit dated May 18, 1922, Margaret stated that she was 22 years old and “is employed in the home of Daniel Jack, Civil War Veteran, Pension Certificate Number 983474. That said Daniel Jack requires almost constant attention, having to have someone help dress him every day. That his mind is in such condition that if he leaves the house even for a short distance by himself he becomes lost and has to have some neighbor bring him home. Affiant has lived in the home almost three years and knows the above facts from personal knowledge. That she is not in any way related to the Soldier.”

Electra and Daniel lived in the home of George Athya and his wife Bertha (Smith) Athya in Apollo. Bertha, the daughter of John Milton Smith, was Electra’s niece. The downstairs was completely private. They used a common staircase to go upstairs where they had separate bedrooms. Electra had a bedroom upstairs and three rooms downstairs. The house was owned by Bertha’s brother, Benjamin Gordon Smith. Daniel died in this house on December 10, 1925.

As Daniel had served in Company G of the 40th Pennsylvania Infantry during the Civil War, Electra submitted a Declaration for Widow’s Pension in Armstrong County on December 14, 1925. She listed her address as 319 South 4th Street, Apollo. The declaration is witnessed by Sylvester F. Hildebrand and Effie G. Beale (Daniel’s oldest daughter with Eunice). Electra received $30 per month, commencing on December 16, 1925. 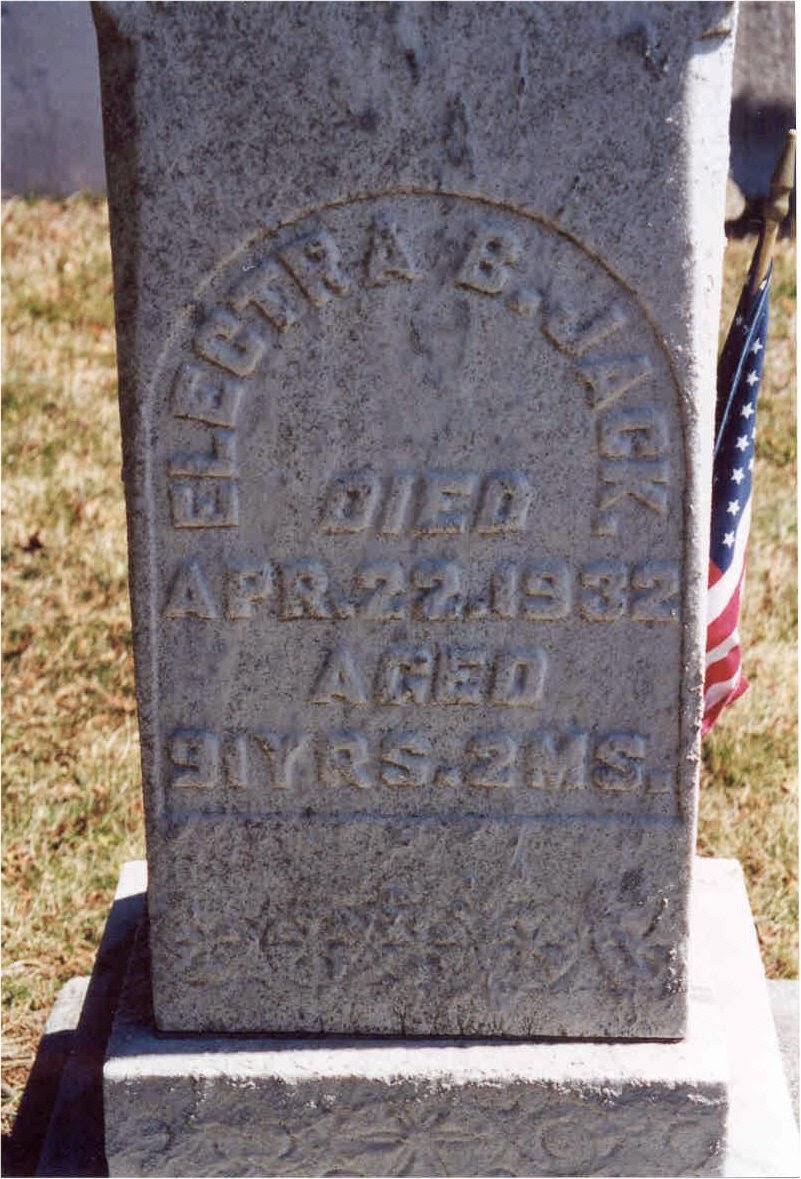 According to 1930 census records, Electra lived with her stepdaughter, Effie Jack Beale and her family, in Pittsburgh, Allegheny County, Pennsylvania. She’s 89 years old and widowed. In 1931, the Pittsburgh City Directory listed Electra, widow of Dan, as living at 4947 Wallingford.

On April 22, 1932 at the age of 91, Electra died of hypostatic congestion of the lungs in Washington, Westmoreland County, Pennsylvania at the home of George and Bertha Athya. Mrs. George (Bertha) Athya of Apollo is the informant on Electra’s death certificate. Electra was buried at Apollo Cemetery. Her funeral services were held in Apollo’s First Presbyterian Church on Monday, April 25. Her obituary stated “… Her father was a tavern keeper nearly a century ago when Apollo was a stopping place on the “high road” from Pittsburgh to Indiana. Her remarkable memory enabled her to the last to recall much of interest about this section as it was many years ago. She took a keen interest in the people and affairs of the community even through the closing years of her life. She was survived by five stepchildren: Charles S. Jack, Vandergrift; Mrs. A. H. Beale and Mrs. William Clark, of Pittsburgh; Howard S. Jack, Apollo, and Frank Jack, Chicago, Ill. The Rev. C. W. Cochran was in charge of the funeral services. Out-of-town guests attending her funeral were Mrs. A. H. Beale and son, Joseph, Miss Mary and Miss Lydia Chambers and Mrs. Sidney McCabe, of Pittsburgh; Mrs. and Mrs. Will Clark, of Steubenville; Frank Jack, of Chicago, Ill.; Archie Evans, of Warren, Ohio, Miss Elsie Evans, of Gary, Ind., and Mrs. Howard Cochran, of Ashley, Ohio.”

She was hard of hearing late in life and is remembered as using a trumpet hearing aid.

When I told my mother-in-law I planned to research her Smith lineage, she responded that with the Smith surname, it would probably be impossible. Lucky me that John and Jane Smith decided to give their children unusual (well maybe not for the times) names and that my husband’s grandmother cared enough about her family to pass these names down to her daughter who then passed them down to me.
Posted by Denise at 8:57 PM