In June 1880, seven year old Alice was living with her family in Falling Creek, Oglethorpe County, Georgia. They live next door to her grandparents, James M. and Caroline (Hobbs) Lankford.

In early 1887, Alice was allegedly raped by Thomas Janes Jr., the son of Thomas Janes Sr., Georgia’s first Commissioner of Agriculture. Alice became pregnant as a result of the alleged rape and gave birth to a son, Carroll Harvey, in Penfield on September 21, 1887. Alice would have been 15 years old at that time. Her grandson remembers two school teachers pulling him and his older sister aside to tell them this story—one I’ve heard many times over the years.

Carroll was given the Lankford surname. Years later in 1947 when submitting an “Application for Social Security Account Number,” Carroll listed his father as Jim (James C.) Lankford and his mother as Mary Wilson (Alice’s parents). I have tracked James and Mary Lankford through all but the 1890 census which was destroyed by fire in 1921 at the Commerce Department in Washington, DC, and have never found a son named Carroll H. Lankford listed with the family. Carroll also listed his birth year as 1889 vs. 1887 which is what is listed on both his death certificate and tombstone. Carroll’s death certificate listed his father as Joe Lankford and his mother as Alice Lankford Callaway. The informant was his oldest child. The family Bible only lists his mother, Alice Callaway. Carroll’s obituary lists a half-brother, Homer Callaway, as a survivor. With all of these discrepancies and the fact that he was given the Lankford surname, I feel something had to have happened but doubt we’ll ever be able to prove anything. I have yet to find a birth record for Carroll.

The Janes family has many connections to Penfield. One example is an Atlanta Constitution article dated May 12, 1883 via the Oglethorpe Echo which states “A few weeks ago while Mr. J. C. Lankford was plowing along down on Dr. Janes’s home place he plowed up the frame of some person who had been buried there in the past. It was lying due east and west and was in its natural form. The contents were gathered up and carried to Dr. Janes for examination and he pronounced it to be an Indian child between 8 and 12 years old.” This article confirms a connection to the Janes and Lankford families.

I’ve been told many times that Carroll never got over the fact that he was illegitimate. It’s sad that he had to live his entire life under these circumstances and that if this story is true, Alice had to live the lie most of her life as well.

On June 9, 1900, Alice and Robert are living in Woodville, Greene County, Georgia. A son named Homer C. (Crawford), born February 1899, is living with them. The census record states that Alice has had one child and that one child is living.

In May 1910, Alice and Robert are still in Woodville. Both Homer (age 11) and Carroll (age 19) are living with them. Carroll is listed as Carrel L. Callaway. The record states that Alice has had two children, both of which are living.

By January 1920, Alice and Robert have moved to Penfield, living on Penfield Road. The census record shows that Alice is able to read and write. Her occupation is listed as laborer on a home farm. Both boys have left the home by this time with Homer and his wife Lou Emma (Armour) living next door.

In 1941, photographer Jack Delano, working for the U.S. Farm Security Administration, took at least two photos* of Alice and Robert for the book Tenants of the Almighty by Arthur F. Raper. The book, published by The MacMillian Company in 1943, depicted the story of Greene County, Georgia and its agriculture. Alice and Robert didn’t make the book but both pictures are in the Library of Congress. The photo is captioned “Mr. and Mrs. Bob Callaway, couple receiving old age pension, Penfield, Greene County, Georgia.” Every time I look at this picture I wonder what my great-grandmother would have thought about this!

When Alice’s sister Jessie died in 1951, Alice was living in Union Point, Greene County, Georgia according to Jessie's obituary. 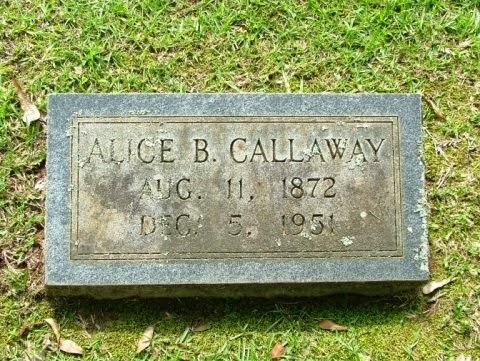 On December 5, 1951, Alice died at her son Homer’s home in Union Point. She was 79 years old. Alice was buried at Penfield Cemetery. According to Familypedia, “only a long-time resident of Penfield, Georgia, or a former long-time resident of Penfield, Georgia, or a long-time employee of Mercer University may be buried in the cemetery.” Alice’s funeral service took place on December 6 at Penfield Baptist Church where she had been a member. Rev. L. T. Newland and Rev. R. W. Greene officiated. The pallbearers were Messrs. T. R. Walker, T. F. Yearwood, D. L. Walker, H. W. Lankford, H. V. Lankford, and Julius Callaway. Union Point’s M. H. Callaway and Company Funeral Home handled the arrangements. Her son Carroll, of Penfield, was listed as a brother in her obituary. Other survivors were two sisters, Mrs. Jack Callaway, of Greensboro; Mrs. W. A. McCollum, of Smyrna; four brothers, N. L. Lankford, of Union Point; V. T. Lankford, of Penfield; Oliver Lankford, of Atlanta; 6 grandchildren, and nine great grandchildren.

Alice was a petite woman and never weighed 100 pounds in her life. Her grandson tells me that she was a beautiful woman when she was young. They called her Granny Callaway. I’ve been told she was as “mean as a snake” but have never heard any stories to back that up. Alice and Bob were married for 54 years.

Alice and the birth of Carroll is a major brick wall for me. If Henry Louis Gates Jr. were to ask me which ancestors I wanted him to research, they would be on the top of my list.