On July 28, 1870, Will and his family lived in Covington, Newton County, Georgia. Two year old Will was big brother to 11 month old Thomas. Their father farmed the land while their mother, who was enumerated as Lily, kept house.

On June 18, 1880, Will and his family lived in the Harbins District of Gwinnett County, Georgia. At age 12, Will was a farm laborer along with his brother Thomas.

Will was 20 years old when his youngest sister, Mollie Mae Burnett, was born in Walton County, Georgia on April 26, 1889.

I have no clue how or when Will made his way to Alabama but he married Martha (Mattie) Ursula Hanson, daughter of Stephen P. Hanson and Martha Caroline Durrett, on March 26, 1899 near Bear Creek in Marion County, Alabama. Martha was born on July 29, 1880 in Cleburne County, Alabama. Together they had eight children—Samuel Stephen, Julia Virginia, Herbert Newton, Amy Leona, Jasper Petty, William Ellis, Charles Noel, and Leonard Dixon Burnett. There was a 13 year age difference between Will and Mattie.

I’ve spent several hours searching for Will and Mattie in the 1900 census records but they are nowhere to be found. I’ll keep looking.


In January 1909, Mattie’s parents purchased over 500 acres of land for $1256.46 about five miles south of Loretto in the southern part of Lawrence County, Tennessee. In October 1909, they divided the land among their children as follows:
The Hanson’s kept the remaining acres for their home place. Martha didn’t receive her land until a year after her brothers did. Later that year, Will and Mattie moved their family to the community of Liberty Grove in Lawrence County, a year after the Stephen Hanson family moved there. During the Hanson family move to Lawrence County, the women and children traveled by train to Loretto. The men and boys drove the cattle and wagons with their belongings along narrow dirt roads. All of them built homes on their land and engaged in farming except for James Petty (Pet) who became a school teacher. Will was one of the founding members of Liberty Grove Baptist Church.

On April 22, 1910, Will and his family lived on Livington Road in the Civil District 2 of Lawrence County, Tennessee. Will was a farmer on a general farm, which he owned. He was able to read and write. Mattie and their oldest son Samuel were farm laborers on the home farm. Mattie had given birth to six children, all of which were living. 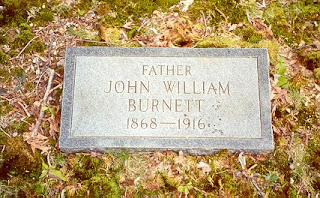 On November 28, 1916, John died suddenly at the age of 48 after returning from the fields in Liberty Grove. It was said he had stomach sickness but it may have been a heart attack. Will was buried at St. Truitt Cemetery on November 29, 1916 in Liberty Grove. He was survived by his wife Martha, who lived 41 more years. She died on November 11, 1957 in Lawrenceburg, Lawrence County, Tennessee, and was buried beside her husband at St. Truitt Cemetery.

Anyone that does genealogy knows you make new friends and find new “cousins” along the way. In late 2000, through the wonder of the Internet, my sister and I connected with several other researchers working on the Samuel P. Burnette and Virginia Overton lines. We were scattered across five states—Virginia, Georgia, Maine, Alabama, and Tennessee. For the most part, each of us could document our direct lines and were aware of Samuel and Virginia, but didn’t know much more. We shared what we knew, compared notes, and then set out to do more research. We had a wonderful time sharing stories, photos, and just being friends. Our research eventually slowed down and we kept occasional contact through Facebook. The only man in the group was Austin Landis Burnette, a direct descendent of John William Burnette. Austin was always joking around with us. I enjoyed his wit and humor. But then he went silent for a while and I later learned that he was suffering from a bout of depression and wasn’t doing much research. Then in mid-February 2011, I received an email from Austin telling me that he was in hospice care. He told me he didn’t want to leave this world without “us girls” knowing what had happened to him. Less than two weeks later, I saw his obituary posted on his Facebook page. Austin was a kind, southern gentleman and it was a pleasure working with him and being a virtual friend and cousin. The pieces of personal information in this blog post where shared with the group by Austin. I hope he knows I’ve shared his family’s story. I'm sure he would have loved to be a part of it.
Posted by Denise at 9:08 PM