On June 25, 1900, nine year old Howard lived with his family in the Washington Township of Westmoreland County, Pennsylvania. As he should have been for his age, he was attending school.

Howard’s 18 year old sister Edith, blind as the result of measles, died of typhoid fever on October 24, 1906 at Mercy Hospital. She was buried at Riverview Cemetery in Apollo, Armstrong County, Pennsylvania.

On April 26, 1910, Howard’s family lived in Washington Township but Howard wasn’t living with them. He would have been 19 years old at that time so that’s not unexpected. Instead, I found a 19 year old male named Howard Smith living as a “hired man” with the Thomas R. Martin family on Apollo Road in the Washington Township on April 25, 1910. Oddly enough, there is another Howard Smith living as a boarder just three houses away but he was 22 years old. I feel the Howard Smith living with the Martin family is most likely the Howard I’m looking for. Howard was working on the Martin’s farm as a farm laborer. His family wasn’t far away. I make it a practice to check the census page to see who else lived in the neighborhood. I didn’t see the Smith family on that sheet, but when I checked the next sheet, there they were. The Martin’s lived at house number 70 and the Smith’s lived at house number 81.


Howard’s father, John, died in Westmoreland County on March 9, 1912. He was buried at Riverview Cemetery in Apollo.

Another sister, Helen, died in Paulton on March 18, 1913. She was only 17 years old. Helen was buried on March 20 in the family plot at Apollo’s Riverview Cemetery. She shares a tombstone with her parents and sister Edith.

On June 5, 1917, Howard registered for the World War I draft. He lived on Fourth Street in Apollo and was an office clerk at American Sheet and Steel in Vandergrift, Westmoreland County, Pennsylvania. Howard was of medium height and build, he had blue eyes, and light hair. My mother-in-law once told me that Howard had one brown eye and one blue eye but that’s not noted on his registration card. Howard noted that he was married but did not record that he had any children under the age of 12. This record is important because I haven’t found a marriage record yet so it tells me that Howard married before June 5, 1917. I know his wife was Myrtle Mary Stewart, daughter of Abner D. Stewart and Mary Bell Johnston. Together he and Myrtle had three children—Stewart Stanley Smith, Alma Margaret Smith, and Richard Franklin Smith.

Howard became a father on January 11, 1919 when his first son, Stewart Stanley Smith, was born in Apollo, Armstrong County, Pennsylvania.

On January 12, 1920, Howard and Myrtle lived with her mother and brother Harry on the south side of North Fourth Street in Apollo. Howard was a clerk in a mill office. Their son Stanley was 11 months old.

On April 11, 1930, Howard and Myrtle lived in the First Ward of Apollo. Howard was 24 when he married Myrtle, she was 23. He was a hardware merchant. They had a radio in their house, valued at $3000, which they owned.

On April 4, 1940, Howard and his family still lived in the North Fourth Street house in Apollo. The highest grade he had completed was the 8th. He was a salesman in a hardware store. His son Stewart, who still lived at home at the age of 21, worked as a mortician’s helper.

At the age of 51 in 1942, Howard registered for the World War II draft. He lived at 507 North Fourth Street in Apollo.

Howard’s mother, Amanda Larimer Horne Smith, died on January 11, 1943 following a stroke in Washington, Westmoreland County, Pennsylvania. She was buried at Riverview Cemetery in Apollo with her husband and daughters Helen and Edith.

Howard retired as a hardware store owner in 1946.

Howard’s brother, Benjamin, died on December 15, 1957, Bedford, Virginia within 10 minutes of having a heart attack. He was buried in the Elks National Cemetery, a section of Oakwood Cemetery designated as the burial place for residents of the Elks National Home.

On December 23, 1959, the Leader-Times of Kittanning, Pennsylvania, reported that “Howard S. Smith, Apollo borough secretary for 38 years, has resigned his post due to ill health. He is recuperating at his home from a heart attack suffered last month.”

Howard’s brother George died on April 24, 1959 in the Washington Township of Westmoreland County, Pennsylvania. He was buried at Riverview Cemetery in Apollo.

Howard died at his residence on January 14, 1961 after suffering another heart attack. He was survived by his wife, Myrtle Stewart Smith; two sons, Stewart Smith of Vandergrift and Richard Smith of Apollo; a daughter, Mrs. William (Alma) Piper of Apollo; seven grandchildren; a sister Bertha Athya of Phoenix, Arizona; and a brother John T. Smith of Blairton. King Funeral Home handled his funeral with the Rev. Warren Martin, pastor of the Apollo Presbyterian Church, in charge of the service. Howard was buried at Riverview Cemetery in Apollo. 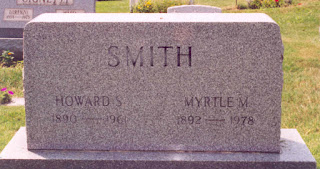 Howard and Myrtle lived in their home on 507 North Fourth Street in Apollo for 44 years. In addition to serving as a well-respected member of the Apollo Council for 38 years, Howard was a member of the Westminster Presbyterian Church and a life member of F and AM Masonic Lodge 437 of Apollo. Friends called him “Smitty.”
Posted by Denise at 8:29 PM