Margaret Athya, daughter of James Athya and Jemima Durie, was born on June 4, 1880 in Liverpool, England. It’s believed that James and Jemima had at least 10, possibly more, children but only eight have been identified—Margaret, Elizabeth, Isabella, Robert, John, George, David, and Mary. Both George and Robert shared their mother’s maiden name, Durie, as their middle name. Margaret went by Maggie and was my husband’s maternal grandfather’s sister.

In 1891, Maggie lived with her family in the Bothwell District in the County of Lanarkshire, Scotland. She was big sister to Elizabeth, Isabella, Robert, and seven month old John.

Maggie was not living with her family in 1901 according to the Dalziel Parrish of North East Lanark census record for James and Jemima Athya. I did find a Margaret Athya, age 20, born in England living in the home of Samuel Laurie (age 72) as a domestic servant. The address for the home was 10 New Square in the Bellshill District, Civil Parish of Bothwell in the County of Lanarkshire. There was also a Lizzie Athya (age 18) living in the home as a servant. Maggie had a sister named Elizabeth born about 1883 so she would have been 18. My best guess is that this is Maggie Athya.

Maggie and her family departed from the port of Glasgow via steerage on the S.S. Grampian, Allan Steamship Line, on May 8, 1912. They arrived in Quebec, Canada on June 16. On the outward passenger list, they declared that their “Country of Intended Future Permanent Residence” was Canada. John was a miner so once arriving in Canada, they settled at Joggins Mines in Nova Scotia where they lived for two years. The outward passenger list contained a surprise for me in that it listed their daughter as Jemima, not Ina. It makes sense as her maternal grandmother’s name was Jemima, but I’d only heard her called Ina. In all of my conversations with my mother-in-law about this family, she never mentioned a name change for Ina. I wonder if she knew about it.

In 1914, John left the family behind in Nova Scotia and traveled to America. He arrived on July 9, 1914 via Class D at the Port of Vanceboro, Maine. At the age of 36, he was joining his uncle, William J. McCandler, who lived in Steubenville, Jefferson County, Ohio. John listed his father James of Coatbridge, Scotland on the manifest as his nearest relative. John was 5’ 7”, had a medium complexion, brown hair, and brown eyes. He paid $50 for his passage. Maggie, James, and Ina left Nova Scotia in November 1914 to join John in Steubenville. They arrived in America via the Port of Buffalo, New York on November 8, 1914. Maggie was 35 years old at the time. Immigration papers record that Maggie was going to 320 Reserve Avenue in Steubenville and planned to stay there permanently.

Maggie’s brother David, who served as a private in the Second Highland Light Infantry, was killed in action on May 10, 1915 at France and Flanders during World War I. Family history is that David most likely died in the second Battle for Ypres standing in a Belgium trench between his brothers, George and Robert. David was awarded the Victory, British War, and 15 Star medals for his service in France. His name is inscribed at the Le Touret Memorial in Pas de Calais in France.

Maggie’s third child, John Jr., the only child born in the United States, was born in Steubenville on July 30, 1917.

On January 22, 1920, Maggie and her family lived at 641 Grandview Avenue in Steubenville. A friend named Della L. Harvis, age 51 and divorced, lived with them. The enumerator recorded Maggie’s place of birth as England and that she immigrated in 1915. Present day family believe that she was born in Scotland. Maggie was recorded as an “Alien.” She sponsored her brother George when he left Glasgow for America on May 11, 1920 via the ship Columbia. George arrived at Ellis Island New York on November 9, 1920.

Maggie’s mother Jemima died in 1924 at the age of 68 in Glasgow, Scotland. The following year, Maggie’s 19 year old son James died of pneumonia at home in Steubenville on February 21, 1925. He was buried at Union Cemetery in Steubenville. Maggie’s brother George was the informant on James’ death certificate.

On April 2, 1930, Maggie and her family lived on Grandview Avenue. They owned the house valued at $3,200. The census enumerator recorded Maggie’s place of birth as Scotland this time. Her husband John was a laborer in a steel mill. John W. Irwin (age 37, born in Ohio) and Norma Irwin (age 19, born in West Virginia), lived in the home and was recorded as boarders.

On April 18, 1940, Maggie and John still lived at the Grandview Avenue home in Steubenville. Their house, which they owned, was now valued at $2,000. Maggie had a 6th grade education. The census enumerator recorded her place of birth as England. John was still working in the steel mill.

Maggie’s husband John retired from the Strip Mill Department of Wheeling Steel Corporation in 1954. He died from lobar pneumonia in Steubenville at the age of 80 three years later on December 15, 1957. His funeral was held on December 18 at the Cole Brothers Funeral Home. The Rev. Dr. Charles W. Fulton officiated, followed by burial in section 31, lot 72 at Union Cemetery in Steubenville.

Maggie’s brother George died of lung cancer in Phoenix, Maricopa County, Arizona on August 30, 1964. His funeral was held on September 2, 1964. George was cremated and his ashes scattered in the Scattering Rose Garden (section 48) at Greenwood Memory Lawn Cemetery in Phoenix. 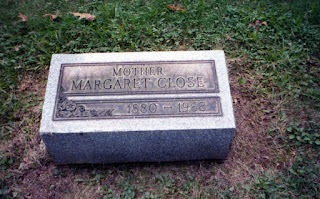 Maggie died of congestive heart failure at the age of 88 at home at 240 Woodridge Drive in Wintersville, Jefferson County, Ohio on December 19, 1968. She was survived by her daughter, Mrs. Joseph A. (Ina) Schneider with whom she made her home; a son, John Close of Pittsburgh, Pennsylvania; two grandchildren and four great grandchildren. Family and friends were received at the Cole Brothers Funeral Home on December 20, followed by a service there on December 21. She was buried at Union Cemetery beside her husband John.

Maggie was a housewife all of her married life. She was 5’ 1”, had a medium complexion, brown hair, and gray eyes. Maggie was a member of the Westminster Presbyterian Church.