Samuel C. Murphy, parents unknown, was born on September 15, 1825 in Monongalia County, Virginia (eventually becoming West Virginia). Unfortunately, I can’t take this Murphy line any further back than Samuel. If anyone can, I’d love to hear from them. Samuel was my husband’s second great-grandfather.

Samuel married Nancy Daugherty, daughter of John P. Daugherty and Catherine Brannon. I haven’t found a marriage record for Samuel and Nancy yet but the census enumerator for October 1850 recorded them together and their first child was born in November 1850 so that gives you an idea of when they may have married. Together Samuel and Nancy had five children—Mary C. Murphy, Martin William Murphy, Margaret Emily Murphy, Elmer Elsworth Murphy, and Nancy E. Murphy. Our Murphy line runs through Martin.

On September 6, 1860, Samuel, Nancy, and their three children lived in the community of Adaline in Marshall County, Virginia. Samuel was a farmer with real estate valued at $375 and a personal estate valued at $150. Nancy’s parents lived five houses away. His son Elmer was born in 1862.

Samuel was drafted and mustered into service as a private on September 20, 1864 at West Brighton, Pennsylvania to serve for one year in Company D, 11th Regiment of the Pennsylvania Volunteers. He appeared on the muster roll for the months of September and October 1864. Near the end of October or the first of November 1864, the regiment was drilled hard at Yellow House, near Richmond, Virginia. Samuel was forced to lay out on the damp ground at nights and suffered from exposure. He was sent to the field hospital near Yellow House on the Weldon Railroad where he was treated for rheumatism for about 10 days. That was followed by a bout of chronic diarrhea so Samuel was removed to Depot Field Hospital in City Point, Virginia where he was treated another 10 days. He was then sent to Harwood Hospital in Washington, DC where he was treated for phthisis pulmonalis (later known as tuberculosis) by Dr. Bucher about five or six months. He was next taken to Whitehall Hospital near Bristol, Pennsylvania where he was treated for intermittent fever about 30 days. Samuel was finally sent to McClellan General Hospital in Philadelphia, Pennsylvania for treatment of diarrhea and anemia from intermittent fever. He remained at McClellan until he was mustered out of service on July 17, 1865 suffering from lung disease, liver affection, and derangement of the stomach.

Samuel returned home from the war a broken man and suffered the rest of his life. In early September 1865, he saw Dr. Owens of Wetzel County, West Virginia. Dr. Owens, who had been Samuel’s family physician for at least 20 years, found Samuel’s disease to be chronic hepatitis with considerable hypertrophy subject to severe spells of hepatic colic. Dr. Owens determined that Samuel was not able to perform manual labor and that his disease was not curable. Dr. Owens felt that Samuel had been a sound man at the time of his enlistment and stated that he had every reason to believe that Samuel had contracted his disease while in the service.

Samuel and Nancy added to their family in 1866 when daughter Nancy was born. The following year, his wife Nancy died in Marshall County on February 7, 1867. She was buried at Greenfield Ridge Cemetery in Marshall County. Her parents are buried beside her.

Samuel married Tabitha A. (Boner or Bonar) Clark, daughter of David Bonar and Elizabeth J. Core (at least that’s what it looks like on Tabitha’s death certificate), on November 27 or 28, 1867 or 1868 (I see both dates on pension records) in Pennsylvania. This was a second marriage for Tabitha who was first married to James Clark on August 13, 1846 in Marshall County, Virginia. James served as a private in Company K, 17th Regiment, West Virginia Volunteer Infantry. Tabitha and James had five children together—Eliza J. Clark (born 1848), Emiline Clark (born 1853), Charles W. Clark (born 1856), Ann R. Clark (born 1861), and Artimace Clark (born 1864). James died of chronic diarrhea contracted while in the service of the United States on July 29, 1865 at Fish Creek in Marshall County. Tabitha was drawing a widow’s pension on James at the time of her marriage to Samuel.

On July 26, 1870, Samuel and Tabitha lived in the Center Township of Wetzel County, West Virginia. He had a full house with both his children with Nancy and Tabitha’s children with James Clark all living in the home. Samuel was a farmer with real estate valued at $500 and a personal estate valued at $200. There was a William Murphy (age 27) family living next door to Samuel and a James Murphy (age 50) family living next door to William. I’ve yet to determine whether James and William were an extension of Samuel’s family. It’s conceivable that James was his brother based on his age. William, at age 27, could have been James’ son. Something to work on.

On June 24, 1880, Samuel, Tabitha, and their family lived in the Liberty District of Marshall County. Samuel was a farm laborer. According to this census record, Samuel’s father was born in Ireland and his mother in Virginia. This is the only record I’ve found that reflects his father’s birthplace. I once found a researcher on the Internet that recorded Samuel’s father as David Murphy from Ireland but for the life of me don’t know what that record was. I keep that tidbit in the back of my mind as a place to start though. At least this census record confirms the location as Ireland. His daughter Emily, age 21, worked as a domestic. Martin, age 24, worked as a farm laborer, possibly helping his father. Elmer, enumerated as Emmer, age 18, worked as a laborer. Tabitha’s son Charles, age 23, was a farmer. Her daughters Rebecca, age 18, and Arte, age 16, were both enumerated as “at home.” There was a six year old grandson named James L. Blake living in the home as well. 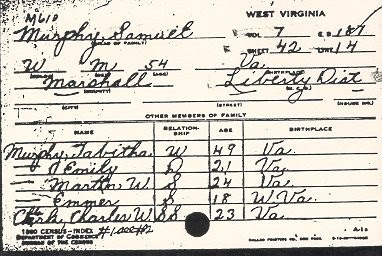 Samuel applied for an Invalid Pension on July 12, 1879 alleging disease of the liver, stomach, and lungs. On July 7, 1882, he requested an increase in his pension of $4 per month stating that the disease increasingly caused general debility, rendering him unable to perform manual labor of any kind and preventing him from following his usual occupation of farming. Samuel stated that he lived in New Martinsville, Wetzel County, West Virginia at the time of the request. An increase to $6 was approved on November 15, 1882. On December 10, 1883, now a resident of Flint, Doddridge, West Virginia, Samuel again requested an increase in his pension. This request was rejected on June 17, 1884.

Samuel was examined by doctors in 1882 and 1884. Both doctors found that Samuel weighed 140 pounds and was 5 feet, 10 ½ inches tall. He had a fair complexion. Samuel was again examined on May 14, 1890 and stated that he had pain in his left breast, his stomach, and under his left shoulder. He was unable to work to any extent due to the pain in his left side. He slept with great difficulty, often remaining awake most of the night. He coughed a good deal. He further stated that he had been confined to his bed about four weeks that spring. The doctor found Samuel to be rather thin and poorly nourished. The left lobe of his liver was enlarged and tender. Samuel’s pension was increased to $10 that same day.

According to a Veterans Schedule in June 1890, Samuel was enumerated in the McElroy District of Tyler County, West Virginia. On February 3, 1892, Samuel, now living in Booher’s Mills, Tyler County, West Virginia, applied for another pension increase. He stated that he was unable to work. His lungs pained him. He was short of breath and coughed a great deal. He spit up “thick corruption of mornings” but did not spit up any blood. His stomach swelled and pained him. His liver pained him. He had pain under the point of his right shoulder blade. He believed his liver was badly affected and his heart fluttered at times. Doctors examined him and found him to be thin, weighing 135 pounds. His skin was clear and free from eruption. Samuel had a debilitated appearance and from indication was unable to do but very little labor. They found him to have roughened breathing over both lungs. He had hypertrophic nasal catarrh, with his mucous membrane being congested, thickened, and inflamed. The pharynx was in a catarrhal condition—an inflammation of the mucous membrane. He had catarrhal trouble of the whole respiratory tract, caused probably by exposure and cold. His tongue was flabby and slightly coated and had tenderness over the gastric region as well as prominence from gaseous distension. Samuel had chronic gastritis as a result of a bad diet.

Samuel died from “liver trouble” on December 18, 1899 in Booher, Tyler County, West Virginia. He was 74 years old at the time of his death. Samuel was buried on December 20, 1899 at Victory Cemetery in Shirley, Tyler County, West Virginia. An Administrator’s Bond in the amount of $1,000 was filed on December 23, 1899 in Tyler County naming John S. Booher (principal) and James W. Booher (surety) as administrators of Samuel’s estate. His estate was charged for taxation on the Land Books for Tyler County for the year 1900 with 11.3/4 acres of land on Indian Creek, valued for taxation at $74 and for 58.1/2 acres of land on Indian Creek, valued for taxation at $366. On February 12, 1900, Tabitha filed for a widow’s pension in Tyler County which she continued to receive until her death on May 15, 1921.

I visited the National Archives in Washington, DC several years ago and had them pull the Civil War pension records for Samuel. I don’t know what they do now but at the time you were not allowed to take anything into the room where you view the records except the debit card you used to make copies of the records. They provided lockers so I left my belongings in one and made my way to the room at my scheduled time. Once there I was handed a huge file for Samuel. I remember the excitement of holding the original post-Civil War records. I had to be very careful as the pages were very brittle. I didn’t want them disintegrating in my hands while I made my copies. If you ever visit DC, be sure to include a trip to the Archives during your visit. Just be sure to do your homework before you go.
Posted by Denise at 7:53 PM