On June 11, 1900, Malonia and her family lived in Sevier County. Her last name was spelled Rinehart. Malonia’s parents had been married for 14 years. Her father was a farmer. At age 13, Malonia was able to read but not write.

Malonia was 21 when she lost her father who died in Tennessee on April 19, 1908. He was 44 years old. William was buried at Catons Chapel Cemetery in Sevierville, Sevier County, Tennessee. Sadly, William didn’t live to see his eldest daughter walk down the aisle the next month when she married Ashley B. Sutton, son of an unknown father and Sarah M. Sutton, in Sevier County on May 10, 1908. Together they had four children—Georgia Lee Sutton, Mapher Sutton, Daisy Gladys Sutton, and Dixie Roena Sutton.

On April 29, 1910, Malonia and her family lived in Civil District 13 of Sevier County. She was enumerated as Lona Sutton, married for one year, and the mother of one child—Georgia, age 1. The Sutton’s were surrounded by family at that time. Malonia’s family was enumerated as family number 165. Family number 166 was Bettie Rhinehart, Malonia’s mother, and Malonia’s siblings—Ollie, James, Arlie, and Hattie. Hattie, age 16, was married to James S. Shields (age 18), who was also living in Bettie’s home. Hattie and James had been married for one year. They were my great-grandparents. Family number 164 was Malonia’s brother-in-law George Sutton. He lived next door with his wife Onie (or Ollie) and son Ashley. There was also a William S. Sutton, enumerated as George’s father, living in the home but I believe he was actually Ashley and George’s grandfather. In 1900, William was enumerated as the head of household in Sevier County with his wife Mary, daughter Sarah, and grandsons George, Ashley, Arnel, and James. The William in 1910 was 75 years old (born May 1836) and was the same age as the William enumerated in 1900. Ashley and George, both 14 years old born in April 1886, were apparently twins.


Malonia’s only son, Mapher, was born in Sevier County on October 3, 1910. Sorrow came to the Sutton house a little over three months later on January 23, 1911 when Mapher died of whooping cough. The location of his grave is unknown to me. A second daughter, Daisy, was born in Sevier County on October 15, 1913. Malonia’s youngest sister Hattie also named her first daughter Daisy which was apparently a popular name in the early 1900s. According to the Social Security Administration, it was in the top 100 names at that time. Malonia’s youngest child, a daughter she named Dixie, was born in Sevier County on April 26, 1915. Young Dixie would never know her mother though. Sorrow came once again to the Sutton household when Malonia died of unknown causes (to me anyway) on November 25, 1916 in Georgia, most likely Whitfield County. She was
buried at Deep Springs Baptist Church Cemetery in Dalton, Whitfield County, Georgia. 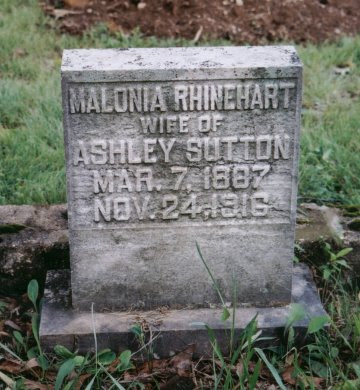