On August 14, 1850, an infant James lived with his family in the 14th District of Greene County. His father was a farmer. The family lived three doors from his grandparents Nathan Augustus Hobbs Sr. and Mary Elizabeth Lankford Hobbs.

On July 21, 1860, 11 year old James lived with his family in Woodville, Greene County, Georgia. His father was now a “stock trader” with real estate valued a $1,500 and personal property valued at $4,000. I imagine they lived pretty well.

At the young age of 12, James was most likely thrown into the role of “man of the house” after his father left home to serve the Confederate States of America during the period May 1861 to May 1865. His father, James, served in Company C of the Third Regiment Georgia Infantry, or the Dawson Grays, and then in Company C of the Georgia State Troops Regiment.

On June 8, 1870, 22 year old James and 20 year old Mary lived in Penfield, Greene County, Georgia. James was a butcher and Mary was keeping house. His sister Emma and her husband James Wilson, also a butcher, lived four doors away. Sometime before 1880, Emma died and was buried at Penfield Cemetery in Penfield.

On June 10, 1880, James, Mary, and their children Homer, Alice, Julia, and Jessie lived next door to his parents in Falling Creek, Oglethorpe County, Georgia. James was now a blacksmith.

On May 12, 1883, The Atlanta Constitution via the Oglethorpe Echo ran the following news article: “A few weeks ago while Mr. J. C. Lankford was plowing along down on Dr. Janes’s home place he plowed up the frame of some person who had been buried there in the past. It was lying due east and west and was in its natural form. The contents were gathered up and carried to Dr. Janes for examination and he pronounced it to be an Indian child between 8 and 12 years old.” This is significant to me because it shows a connection to Dr. Thomas P. Janes and the Lankford family. You’ll find some history on this connection from my blog post about my great-grandmother, Alice Beman Lankford.

It appears that James liked to fish. On March 12, 1886, a news article ran in a Greene County newspaper stating “Vase McWhorter and J. C. Lankford are the champion fishermen and they will soon begin to try their hand.”

James’ father died in Lithonia, DeKalb County, Georgia on October 29, 1887. I have yet to find where he was buried.

By June 1, 1900, James and his family had moved back to Woodville. James and Mary had celebrated 31 years of marriage. His nephew, Julius C. Wilson, son of Emma S. (Lankford) Wilson, lived next door with his wife Elvie and son Julius. James supported his family as a farmer.

James’ mother died on January 8, 1906 in Baldwin County, Georgia. James filed an “Application for Pension Due to a Deceased Pensioner” on February 14, 1906 to pay her funeral and last illness expenses. I have yet to find where Caroline was buried.
﻿ 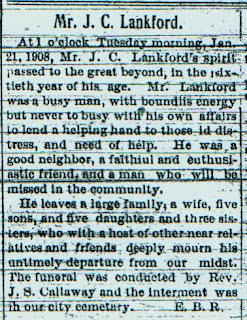 Just two years later, James died on January 21, 1908 in Greene County. He was buried at Penfield Cemetery in Penfield. His obituary reads “Mr. J. C. Lankford. At 1 o’clock Tuesday morning, Jan. 21, 1908, Mr. J. C. Lankford’s spirit passed to the great beyond, in the sixtieth year of his age. Mr. Lankford was a busy man, with boundlis energy but never to busy with his own affairs to lend a helping hand to those in distress, and need of help. He was a good neighbor, a faithful and enthusiastic friend, and a man who will be missed in the community. He leaves a large family, a wife, five sons, and five daughters and three sisters, who with a host of other near relatives and friends deeply mourn his untimely departure from our midst. The funeral was conducted by Rev. J. S. Callaway and the interment was in our city cemetery. E.B.R.”

I was happy to learn that my 2nd great-grandfather was highly regarded by his family and community.
Posted by Denise at 7:19 PM