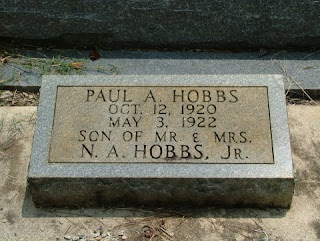 Paul Augustus Hobbs, son of Nathan Augustus Hobbs Jr. and Lethia Ollie Kendall, was born October 12, 1920 in Oglethorpe County, Georgia. He was the first born child of Nathan and Lethia who were married in Bradley County, Tennessee on March 18, 1918.

Prior to Paul’s birth, his parents lived with his paternal grandparents, Nathan Augustus Hobbs Sr. and Mary Elizabeth Pitts, so it’s most likely they were still living there in October 1920 and that Paul was born in their home. If they in fact still lived with Paul’s grandparents, he would have been surrounded by many family members, including several young aunts and uncles—Eula B. Hobbs (age 17), Mary Lou Hobbs (age 12), Nancy H. Hobbs (age 10), Edna Hobbs (age 7), and Charlie B. Hobbs (age 4 8/12).

According to the January 22, 1920 Glade District, Oglethorpe County, Georgia census record, Paul’s mother Lethia, who was born in Tennessee, was 18 years old at the time of his birth. His father, Nathan Sr., was 28 although the census enumerator recorded his age as 26. Paul’s father was a farmer on a general farm. 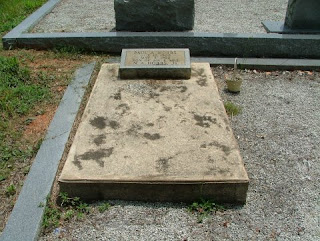 Like my post on his uncle Reuben Hobbs last week, little Paul’s life ended way too soon when he died from bronchopneumonia with encephalitis as a contributing factor on May 3, 1922 in Point Peter, Oglethorpe County, Georgia. The Oglethorpe Echo reported his death in two articles on May 12, 1922:


Sympathy of our entire community (Millstone) goes out to Mr. and Mrs. N. A. Hobbs in the death of their nineteen month old son which occurred Wednesday morning.

We were saddened last Wednesday to hear of the death of little Paul Hobbs, son of Mr. and Mrs. Gus Hobbs. He had been very ill for several days with some kind of brain trouble. He was buried at the Glade cemetery last Thursday. It was doubly sad as this was an only child.

Paul was buried at the Glade Baptist Church Cemetery in Point Peter.
Posted by Denise at 6:45 PM