Just before John’s fifth birthday, tragedy struck the Smith family when his 18 year old sister Edith, blind as the result of measles, died on October 24, 1906 of typhoid fever at Mercy Hospital. She was buried at Riverview Cemetery in Apollo, Armstrong County, Pennsylvania.

On April 26, 1910, the family lived in Paulton, Washington Township, Westmoreland County, Pennsylvania. A neighbor two doors away was John A. Stewart. Mr. Stewart was also a neighbor in 1900 so they must be living in the same house. His father and brothers Ben and George worked in a sheet mill. Two years after this census was taken, his father died in Westmoreland County on March 9, 1912. His father was buried at Riverview Cemetery in Apollo.

After suffering with endocarditis (an inflammation of the inner layer of the heart) for two years, John’s sister Helen died in Paulton on March 18, 1913. She was just 17 years old. Helen was buried on March 20 in the family plot at Apollo’s Riverview Cemetery. She shares a tombstone with her parents and sister Edith. 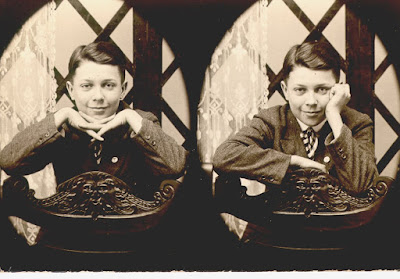 On January 26, 1920, 18 year old John lived with his 60 year old widowed mother in the North Washington District of Washington Township. The home was located on Greensburg – Apollo Road. Three of John’s siblings still lived in the home—Ben (age 37), George (age 34), and his remaining sister Bertha (age 22). All were able to read and write. John, Ben, and George all worked in a steel mill with John being an addressgrapher. According to Wikipedia, “an addressograph is an address labeler and labeling system” so I assume it’s how they marked the steel. Ben was a “catcher” and Ben a “ruffer.” Bertha wasn’t working. I assume she spent her time helping her mother take care of the house and her brothers.

John married Virginia Kimmel Johnston, daughter of John Frank Johnston and Emma Agnes Uncapher, about 1924 or 1925 in Pennsylvania, most likely in Westmoreland County. John was 23 years old and Virginia was 22. Together they had two children—Lois Kimmel Smith and Russell W. Smith. Lois was given her mother’s maiden name as her middle name. Kimmel was also the surname of Virginia’s paternal grandmother Sarah A. Kimmel so I guess you could say they were carrying on a family tradition.


On April 12, 1930, John, Virginia, and Lois (age one and a half) lived on the “right side” of Paulton in the Washington Township. I have no clue what the “right side” means but that’s what the census enumerator wrote. Maybe he meant the west side of Paulton. He owned his house which was valued at $5,000. They also owned a radio. John still worked in a steel mill but was now a clerk.

On April 5, 1940, John and his family still lived in Paulton, in the same house they had lived in since 1935. The family was complete now having added their son Russell in May 1934. There were two boarders living in the home—Grace Gally and Mary Witherspoon—both 30 year old teachers—the same occupation as Virginia.

John’s mother, Amanda Larimer Horne Smith, died on January 11, 1943 following a stroke in Washington, Westmoreland County, Pennsylvania. She was buried at Riverview Cemetery in Apollo with her husband and daughters Helen and Edith.

John’s brother George died on April 24, 1959 in the Washington Township. He was buried at Riverview Cemetery in Apollo.

John’s brother Howard died at his residence on January 14, 1961 after suffering a heart attack. King Funeral Home handled his funeral with the Rev. Warren Martin, pastor of the Apollo Presbyterian Church, in charge of the service. Howard was buried at Riverview Cemetery in Apollo.

John retired from the Vandergrift plant of United States Steel Corporation after working more than 40 years in the payroll department. He was a member of the First Presbyterian Church in Vandergrift.

John died at the age of 67 at the Belair Nursing Home on September 23, 1969 in the Lower Burrell Township of Westmoreland County, Pennsylvania. He was buried at Greenwood Memorial Park in Lower Burrell. John was survived by his wife Virginia, daughter Lois Smith Hilty, his son Russell Smith, three grandchildren, and his sister Bertha Smith Athya. After his death, Virginia moved to Florida to live with Lois.