The borough of Apollo, Armstrong County, Pennsylvania is celebrating their bicentennial this year and are in the midst of a “year-long community celebration that will culminate in a 10-day festival July 1, 2016 through July 10, 2016.” This caught my attention several months ago because my husband’s maternal roots extend deep into Apollo’s history. So out of curiosity, I thought I would pull together some of the key items of interest to see how it played out. I’ve noted his direct lines as well as collateral ancestors. Some lived their life quietly, going about everyday business, while others took action and helped shape Apollo.


John Thompson Smith (second great-grandfather)
John T. Smith, a local innkeeper, was elected Apollo town councilman on May 3, 1848 at an election held at his house—the inn. He was also an Apollo postmaster, running the post office from his tavern. When Apollo celebrated its Quasqui Centennial (125th anniversary) June 29 – July 4, 1941, John was included on page 24 of the souvenir program published for the celebration as part of Apollo’s history where it noted his part in Apollo’s first election. Page 41 of the program notes him as a Apollo “First”—the first tailor. John died in Apollo on March 11, 1864 and was buried at Riverview Cemetery in Apollo.

His wife Jane Gordon Smith died on March 11, 1877 and was buried at Riverview Cemetery. The tombstone is a marker for Jane, Jane’s first husband John McIlwain, who died in Apollo in 1837, and John Thompson Smith. John McIlwain was listed on page 22 of Apollo’s Quasqui Centennial souvenir program. He was one of the early settlers of the town of Warren, which eventually became part of the borough of Apollo. John McIlwain was a tavern owner there. Upon his death, Jane married John Thompson Smith. T. J. Henry’s book History of Apollo, PA. 1816 – 1916: The Year of a Hundred Years (published in 1916 by The News-Record Publishing Company in Apollo) notes on page 23 … “After the death of John McIlwain, John T. Smith married his widow and they kept tavern for many years on the corner of Warren Avenue and First Street.” 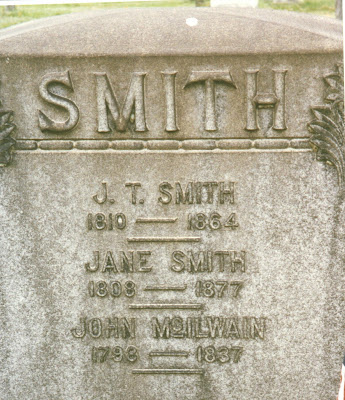 John's wife Amanda was received by probation at the Apollo United Methodist Church on October 25, 1874. She died in Apollo on January 13, 1943 and was buried at Riverview Cemetery.


His daughter Edith McCrum Smith was born in Apollo on March 4, 1888. She died from typhoid fever at Mercy Hospital in Pittsburgh on October 24, 1906. Edith was buried at Riverview Cemetery on October 26, 1906.

His daughter Helen Margaret Smith died from heart disease in Westmoreland County on March 18, 1913. She was buried at Riverview Cemetery on March 20, 1913.

Moses Horne (second great-grandfather)
Apollo county land ownership maps recorded the Moses Horne family living on Indiana Street in 1876. Census records indicate Moses was a “dealer in groceries” in Apollo on June 26, 1880. Moses died of heart disease in Apollo on April 11, 1910. His death certificate indicates he was buried in Apollo but doesn’t note the cemetery name.

His daughter Josephine B. Horne was baptized by J. F. Murray at Apollo United Methodist Church on August 26, 1883. She died of mitral stenosis in Apollo on March 24, 1941 and was buried at Apollo Cemetery on March 26. She lived at 213 South Second Street at the time of her death. Jo was deaf and never married.

Moses' wife Elizabeth died in Apollo on May 1, 1913. She was buried at Apollo Cemetery on May 3.

His son George died on December 19, 1915 from a fractured skull and other injuries caused after being struck by a locomotive on the Conemaugh Division of the Pennsylvania Railroad at the West Apollo Crossing. He was buried at Vandergrift Cemetery in Vandergrift, Westmoreland County, Pennsylvania.

Bertha Edna Smith (grandmother)—daughter of John Milton Smith and
Amanda Larimer Horne
Bertha probably attended events at Apollo’s Centennial celebration in 1916. We have the picture below of her standing in front of a house with patriotic banners I see in other pictures from that year.


Bertha and her husband George Durie Athya (born in Glasgow, Scotland) lost a home on Cherry Lane when the Kiski River flooded in the early 1940s. The river flooded and took the house downstream where it crashed into a bridge. George built the house himself and was nearly done when the flood took place.


Mary Margaret Athya (mother)—daughter of Bertha Edna Smith and George Durie Athya
Mary attended Apollo’s Quasqui Centennial in 1941. She was part of the “Kiskicade” cast and was listed on page 37 of the souvenir program: episode XII—Miss Apollo and Her Court—Foreign Countries. 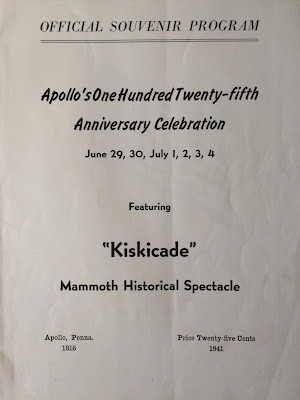 Electra Burnette Smith (second great-aunt)—daughter of John Thompson Smith and Jane Gordon
Electra was born in Apollo on February 11, 1841. She was admitted to Apollo’s First Presbyterian Church on October 8, 1858 and was baptized and received full communion as an adult on October 10, 1858. Electra married Daniel Jack at the Apollo Presbyterian Church on February 20, 1896. Daniel was the widower of Electra’s sister Eunice. Information for Daniel Jack can be found under Eunice.


T. J. Henry’s book History of Apollo, PA. 1816 – 1916: The Year of a Hundred Years acknowledged Electra’s (and others) contributions for “information furnished from memory’s stores” in the book’s Foreward. She was also mentioned on page 89—“Mrs. DANIEL JACK (nee SMITH), is the oldest native inhabitant of Apollo.”


Sylvester Hildebrand (pictured below) and Xenophon W. McIlwain witnessed an affidavit in Electra’s filing for a widow’s pension (Daniel Jack) on January 11, 1926.

Electra died on April 1932 and was buried at Riverview Cemetery.

Erastus Smith (second great-uncle)—son of John Thompson Smith and Jane Gordon
Erastus mustered into Company E of the 139th Pennsylvania Infantry Regiment as a private in Pittsburgh, Allegheny County, Pennsylvania on September 1, 1862. Perhaps wanting to make sure his spiritual life was in order before entering the war, he joined the First Presbyterian Church in Apollo. The church register shows that Erastus was admitted to the church by “Escamination” on October 10, 1862. He married Jane Rachel Anderson, daughter of Samuel Anderson and Mary Mawheny, on March 24, 1869 in Apollo. Census records indicate that Erastus, Jane, and daughter Elsie lived in the Kellys Station subdivision of Apollo on June 24, 1870. He was suspended from the First Presbyterian Church in Apollo on March 21, 1872. Erastus died from erysipelas in Apollo on April 13, 1886 and was buried at Riverview Cemetery. His wife Jane died in Apollo on March 5, 1916.


Daniel Jack was born in Apollo on August 30, 1840. He played first alto in Apollo’s First Brass Band in 1857 which disbanded when the Civil War started. Daniel was one of the first recruits to enroll on April 27, 1861 in support of the Union Army when he enlisted at Camp Wright. His unit—Company G, Pennsylvania Eleventh Reserves, 40th Infantry Regiment—was recruited by S. M. Jackson at the first call for troops to fight in the Civil War. Daniel held the rank of Sergeant. After the Civil War ended, another brass band was formed and Daniel again was a member. Apollo census records indicate that Daniel worked in a planing (lumber) mill on June 23, 1870. He and his family lived in the Kelly’s Station subdivision of Apollo. Daniel was elected Quarter Master of the Charles S. Whitworth Post on January 21, 1878. He submitted a Declaration for Invalid Pension in Armstrong County on March 13, 1896 stating that he was “partially unable to earn a support by manual labor by reason of general disability.” His address was Apollo, Pennsylvania. A July 1916 newspaper article (name unknown) ran stating “Mr. Daniel Jack is a life long resident of Apollo. He has been quarter-master of the local G.A.R. post for a long term of years and until two years ago has carried the colors to the cemetery on Memorial Day since the organization of the post. His residence is on S. Fourth Street.” Daniel appeared before a justice of the peace on April 15, 1921 in Apollo to file a declaration of pension. He claimed that he was 80 years old, a resident of Apollo, and the identical person who enrolled at Apollo under the name of Daniel Jack on April 27, 1861 as a Sergeant in Captain James H. Mills Company G, 11th Regiment, Pennsylvania Reserves Infantry, in the service of the United States in the Civil War. He further claimed that he was honorably discharged at Pittsburgh on June 13, 1864, ending his service. Daniel died of a paralytic stroke at his home in Apollo on December 10, 1925. He was buried at Riverview Cemetery. His obituary stated that he was “one of Apollo’s oldest and most esteemed citizens.”

Martha Jane Smith (second great-aunt)—daughter of John Thompson Smith and Jane Gordon
Five children were born to Martha and her husband Hugh Evans in Apollo: Elsie E. Evans in September 1866, Annie Evans about 1869, William F. Evans about 1871, Edith Evans about 1873, and Alice Evans about 1875. Martha died in Apollo on March 31, 1921 and was buried at Apollo Cemetery.


Howard Stanley Smith (great-Uncle)—son of John Milton Smith and
Amanda Larimer Horne
Howard was born in Apollo on December 7, 1890. He was a hardware merchant in Apollo during the 1930s and 1940s, retiring in 1946. Howard and his wife Myrtle Mary Stewart lived in their Apollo home on 507 North Fourth Street for 44 years. He was the Apollo borough secretary for 38 years, resigning his post in December 1959 due to ill health after suffering a heart attack in November. Howard died in Apollo on January 14, 1961 following a heart attack and was buried at Riverview Cemetery. Howard was a member of the Westminster Presbyterian Church and a life member of F and AM Masonic Lodge 437 of Apollo. Friends called him “Smitty.”


His wife Myrtle died in Apollo on September 5, 1978 and was buried beside Howard at Riverview Cemetery.


George Nelson Smith (great-Uncle)—son of John Milton Smith and
Amanda Larimer Horne
George was born on October 22, 1885 in Apollo. He died in Westmoreland County on April 27, 1959 and was buried at Riverview Cemetery.


At least three generations of my husband’s family have a connection to Apollo’s milestone celebrations. While my husband isn’t attending the bicentennial celebrations this summer, this is my way of connecting a fourth generation. I wish the people of Apollo a very happy bicentennial!
Posted by Denise at 7:25 PM