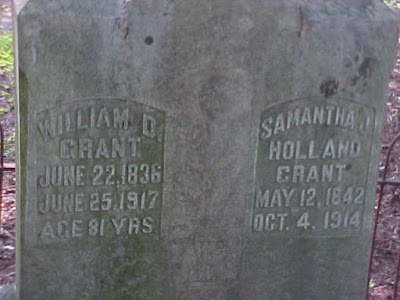 On August 16, 1850, Samantha and her family lived in the Eastern Subdivision of Anderson County, South Carolina. She was enumerated as Jane S. Holland. Her father was a farmer.

On June 25, 1860, 17 year old Samantha lived with her family in the 4th Regiment of Anderson County, South Carolina. Her 18 year old sister Nancy, and brother-in-law, Marcus Hall, lived next door. Samantha’s father John was a farmer.

Samantha and William moved to Clarkesville, Habersham County, Georgia in 1861, shortly after their marriage. The newlyweds were still adjusting to their new life in Clarkesville when the Civil War broke out in 1861. Two years later, William enlisted in Company C of Phillips’ Legion in the Regiment of Georgia Volunteers, Wofford’s Brigade of the Army of Northern Virginia in June 1863, leaving Samantha at home with their two year old son John and pregnant with their son Asa. In November 1863, William contracted rheumatism, which moved into his hip and knee. The rheumatism grew worse until in June 1864, the Board of Physicians examined William and discharged him from service, sending him home from Richmond, Virginia. William probably arrived home shortly after the June 1864 birth of Asa (who would eventually serve as a member of the house of representatives from Oconee County, South Carolina and as a magistrate in Seneca, South Carolina for 20 years). William remained at home until September 1864 when he was ordered to report for service at Macon, Georgia. By this time, the rheumatism was so bad he had to walk with a stick and was unable to do manual labor. While in service, William became disabled again with rheumatism and an attack of jaundice. In February 1865, William was sent to the hospital in Macon. After examination by the physicians there, William was again sent home on furlough about the first of March. He was still at home on furlough when the surrender at Appomattox Courthouse in Virginia took place on April 9, 1865. Leroy Thomas Holland, Samantha’s brother and my second great-grandfather, however, was one of the prisoners of war surrendered by General Robert E. Lee and paroled at Appomattox. The rheumatism didn’t affect William’s ability to procreate, and he and Samantha added 10 more children to their family with their third child, Thomas, being born in April 1866 and their last child, Mamie, in 1885.

On June 5, 1870, Samantha and her family lived in Clarkesville. William was a blacksmith with a personal estate valued at $1,000. Elizabeth (Majors) Holland, Samantha’s mother, died on February 27, 1876 at the age of 66. Her family was still in mourning when on December 24, 1876 Samantha’s son Starling died at the age of 2 in Habersham County. He was buried at Old Clarkesville Cemetery in Clarkesville. The following year, John Holland, Samantha’s father, died at the age of 70 on September 9, 1877. It’s believed John and Elizabeth Holland were both buried in the Math Cobb Cemetery across the railroad from the old home place on Pea Creek in Anderson County, South Carolina.

On June 1, 1880, Samantha and her family lived in Clarkesville. She was keeping house and William was still a blacksmith.

On June 14, 1900, the family still lived in Clarkesville. Samantha was enumerated as Jane. The census recorded her as the mother of 11 children, 10 of which were living. Her son James was a lawyer. Noel was a school teacher. Noel would eventually join the U.S. Navy and serve as lieutenant commander of the U.S.S. Delaware. Her son Judson was enumerated as “Judge.” Samantha was also recorded as “Jane” in the 1850 census as well as her son Asa’s 1942 death certificate. This makes me wonder if she went by Jane vs. Samantha.

On April 19, 1910, Samantha, William and their youngest child, Mamie, lived on Washington Street in Clarkesville. William made his “own income.” The census enumerator recorded her as the mother of 12 children, 11 of which were living. Samantha and William had been married for 49 years. Her son Charles died at the age of 45 in Wheatland County, Montana on June 24, 1913. It’s believed he was buried at Langston Cemetery in Harlowtown, Montana. 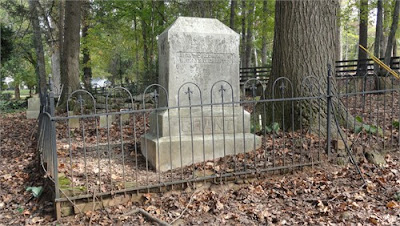 Samantha died on October 4, 1914 at the age of 72 in Clarkesville of “an attack of acute indigestion.” On October 6, The Constitution of Atlanta reported her death was from cholera morbus described as “acute gastroenteritis occurring in summer and autumn and marked by severe cramps, diarrhea, and vomiting” by the Free Dictionary. The Constitution described Samantha as “one of Clarkesville’s oldest and most respected residents.” Funeral arrangements were held up until her son Noel, who was lieutenant commander of the U.S. Delaware, stationed at Vera Cruz, could be notified. Her obituary [from an unknown newspaper but possibly The Constitution as well] reported “Death Comes Suddenly to Mrs. W. D. Grant—After an Illness of Only a Few Hours One of This City’s Beloved Mothers Passed Away Sunday. Sunday morning at 11 o’clock Mrs. Samantha Jane Grant, wife of Mr. W. D. Grant, was stricken with an attack of acute indigestion and for several hours it seemed that death was inevitable but she rallied and it was thought her condition was much better, but a second attack came and in a few minutes she had passed away, death occurring at 6:30 o’clock Sunday afternoon, October 4th. Mrs. Grant was born at Belton, Anderson county, S.C., May12th, 1842, being at the time of her death in her 73rd year. She was a daughter of John and Elizabeth Holland. She married to Mr. Grant on Dec. 23, 1860, coming to Clarkesville as a bride, where she resided until her death. Mrs. Grant was the mother of 12 children, ten of whom survive her. They are: A. P. Grant, Seneca, S.C.; T. L. Grant, Atlanta, J. S. Grant, Bostwick, J. W. Grant, Welsston, Okla., Capt. J. H. Grant, Oklahoma City, Okla.; J. R. Grant, Hazelhurst, N. W. Grant, lieutenant commander of the U.S.S. Delaware, stationed at Vera Cruz, Mexico, Mrs. Max Holtz, Atlanta; Mrs. J. C. Hood, Nacoochee, Mrs. H. K. Wood, Clarkesville. All came for the funeral but two sons, N. W. Grant, who couldn’t reach here in time, and Capt. Grant, who is sick at his home. Mrs. Hubert Nelson, a granddaughter, of Florence, S.C., and other grand and great grandchildren attended the funeral. There are 65 direct descendants, seven of whom are great-grandchildren that survive her, besides her husband, who is 77 years of age. She was a member of Bethlehem Baptist Church being a consecrated member of her church. She was a woman beloved by all who knew her. Hers was a life of service and usefulness to those near and dear to her, and truly it can be said of her that a “Mother in Israel” has passed away. Mrs. Grant was very fond of flowers, especially the old time ones, and her casket was laden with many of her favorite flowers, the offering being many from her large circle of friends. The funeral will be held Wednesday afternoon at 2 o’clock at the residence and the interment will be in the old cemetery in this city, Rev. J. W. Kytle, of this city officiating.”

References
Posted by Denise at 9:38 PM