On June 9, 1900, Henry and his family lived in the Church District of Wetzel County. Henry’s father was a farmer. His mother Lucinda was enumerated as the mother of 11 children, 10 of which were living.

On April 28, 1910, Henry and his family lived in the Clay District of Wetzel County. Henry’s parents have been married for 32 years. His mother Lucinda was enumerated as the mother of 13 children, 10 of which were living. Fourteen year old Henry was a farm laborer on the home farm. He was attending school and was able to read and write.

On June 5, 1917, Henry, who lived in Littleton, registered for the World War I draft. He was a farmer, employed near Littleton by his father Robert Church. He was of medium height and build, had grey eyes, and light hair. 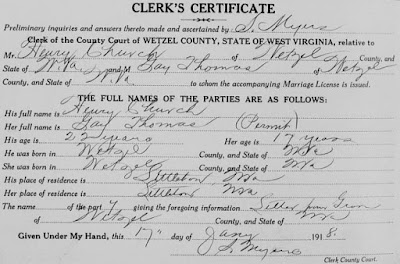 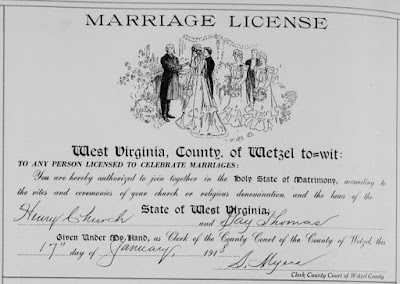 On January 30, 1920, Henry, Gay, and their one year old son Clarence lived in Littleton. Henry was 24 and Gay 18. The census enumerator record “none” under the column for occupation/trade. Gay was not working either. Wanda was born in May 1920, and Laverne in July 1923.

On April 18, 1930, Henry and his family lived in the Center District of Wetzel County. Henry rented the home they lived in.

Henry’s brother, Samuel C. Church, died at age 50 on June 22, 1931 in the Church District of Wetzel County. His father Robert died on November 29, 1932 in Littleton. Both were buried at Thomas Chapel Church Cemetery in Wetzel County. Henry’s mother Lucinda died on January 13, 1933 in Littleton and was buried at Thomas Chapel Church Cemetery. The Wetzel Democrat of New Martinsville, West Virginia published her obituary on January 19, 1933: “Last rites for Mrs. Lucinda Church, aged 74 years, were held from the Thomas Chapel M. E. Church on Sunday afternoon with Rev. Eismon officiating. Interment was made in the Thomas Chapel Cemetery. Mrs. Church died Friday morning January 13th, following a serious illness of only three days. Mrs. Church was a lifelong resident of this county, being born near this city in 1858. Her husband, the late Robert Church, preceded her in death by only six weeks. The deceased was a daughter of John and Joanna Murphy, pioneers of Wetzel County. She was a member of the M. E. Church. Surviving are nine children: James Church of Hundred, W. Va.; Henry Church of Kodol, W. Va.; Charley Church, at home; Presley Church of Littleton, W. Va.; Donald Church of Clarksburg, W. Va.; Mrs. Dessie Murphy of Littleton; Mrs. Jennie Davis of Weston, W. Va.; Mrs. Martha McIntire and Mrs. Anna Evans, both of Clarksburg.”

Henry’s sister, Martha Church McIntire, died in Clarksburg, on August 6, 1936. She was buried at Elkview Cemetery in Clarksburg beside her two husbands, brothers Lester and Chester McIntire.
On June 29, 1940, Henry and Gay owned a house valued at $1000 in the Center District of Wetzel County. They were living in the same house in 1935. Henry was a farmer on a home farm and had worked 60 hours the week prior to the 1940 census being taken. Laverne, age 17, was the only child left at home.

Henry’s sister Dessie died at home in Littleton on November 20, 1940 from stomach cancer at the young age of 51. She left five children behind with the youngest child only 12 years old. Dessie, along with her parents, husband, and sister Jennie, are buried in the front row at the base of the hill at Thomas Chapel United Methodist Church Cemetery in Wetzel County. 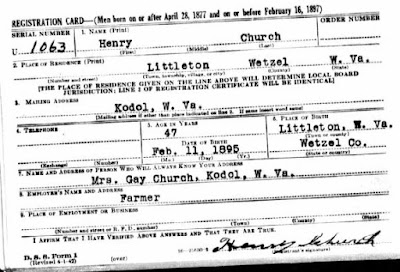 In 1942, Henry registered for the World War II draft. He lived in Littleton which had a mailing address of Kodol, West Virginia. Henry was 47 years old and a farmer.

Henry’s brother Charles Cleveland Church died in Littleton on April 12, 1955. He was buried at Anderson-Bethel Cemetery in Littleton.

Henry’s sister Anna died of occlusive arterial disease at Weston State Hospital in Weston, Lewis County, West Virginia on March 29, 1959. She was buried at Green Lawn Cemetery in Clarksburg.
Henry’s sister Jennie died of a cerebral hemorrhage and arteriosclerosis on February 26, 1963 at Weston State Hospital in Weston. She was buried beside her parents at Thomas Chapel United Methodist Church Cemetery in Glover Gap, Wetzel County, near the town of Hundred. His brother James died on August 9, 1969 in Salem, Columbiana County, Ohio. He was buried at Hope Cemetery in Salem. 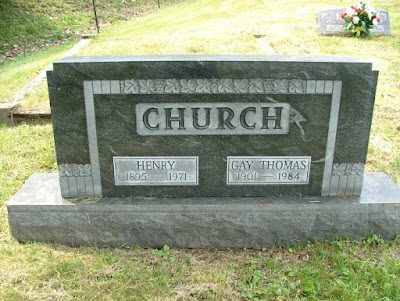 My husband remembers visiting family in Wetzel County in the late 1960s or early 1970s. They took their camper and camped at the foot of the hill where Henry and Gay’s house sat. At 6 o’clock one morning, Gay came knocking on the camper with a fresh apple pie for the family. He said he was sure it was good!

Henry died on April 7, 1971 in West Virginia. He was buried at Thomas Chapel United Methodist Church Cemetery in Wetzel County.


Henry was a descendent of Henry “Old Hundred” Church for whom the town of Hundred was named.
Posted by Denise at 9:22 PM