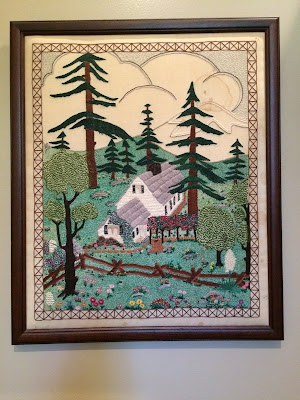 On one of my trips home to Atlanta in the mid-1980s, Daddy (Sam Lankford) had a piece of crewel embroidery artwork laying across the back of his living room chair. To my surprise, Daddy was the artist. Mama later told me that she taught Daddy how to do crewel years ago. It was something he could do to relax at night. The embroidery was a primitive house scene with lots of flowers, trees, and grass. His work was very intricate. Daddy said he started with a pattern but embellished the scene with additional details of his own.

The following summer, the artwork was still laying across the back of the chair. I remember telling him at that time “if you aren’t going to do anything with that, you can always send it to me.” He just shrugged his shoulders and that was the end of it … until the next year when out of the blue, a large brown envelope showed up in my mailbox. I knew what it was before I opened it. The only thing in the envelope was the artwork. I looked for a note thinking Daddy might have written one but I guess he assumed I would know it was from him and didn’t bother to write one. 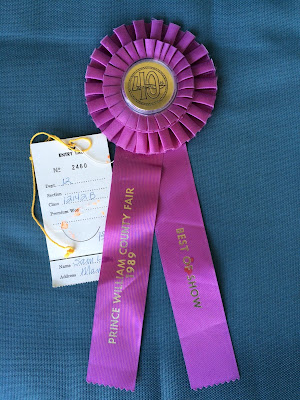 Now I had do something with it. I couldn’t just lay it across a chair like Daddy did since I gave him a hard time about that so I took it to a professional framer to have it framed. I remember she pointed out a couple of frayed spots on the material and asked if I wanted to repair them before she framed it. I told her no—that was the way he sent it to me and that was the way it was going to stay. We picked out a dark wooden frame and she put a raised backing underneath the material. I regret not putting the artwork behind glass though. Over the years, a couple of stains appeared on the material. I tried to clean them, but didn’t like what it did to the material so I gave up, fearing I would ruin it.

In August 1989, I entered the framed piece in the senior division at the Prince William County Fair in Manassas, Virginia. To my surprise, not only did it win first place, but it also took Best of Show. I remember he was so excited when I called him to tell him the news. The prize was a check for about $5—maybe a little more, maybe a little less. After the fair ended, I mailed the check and ribbon to Daddy. He held onto the ribbon for years but gave it back to me several years ago since I have the artwork and it’s something I’ll always treasure.