One of my husband Charlie’s prized possessions is a pocket watch given to him in 1994 by his uncle, Ralph Junior Murphy. The watch, manufactured by Elgin, once belonged to Charlie’s grandfather, Charles Homer Murphy. We don’t find a marking denoting that its gold, although it is gold in color. There may be a marking on the inside back cover but we’re both afraid to open the back so I guess we’ll never know. Both the front and back covers have an ornate engraved vine design. At some point, uncle Ralph had the initials “RM” engraved on the front cover. The watch has a serial number engraved on the inside of the front cover, which, if I have researched correctly, means the watch was made in 1905. The chain is a silver tone snake link with a plastic monkey and nut attached at the end of the chain.

Uncle Ralph wrote a note to Charlie to document the history of the watch:


“Charles, I have had this watch since 1935 when Mom gave it to me. Dad gave it to her, I don’t know when. I thought it best to give it to you. Sincerely, Ralph.”

Here's a picture of the actual note: 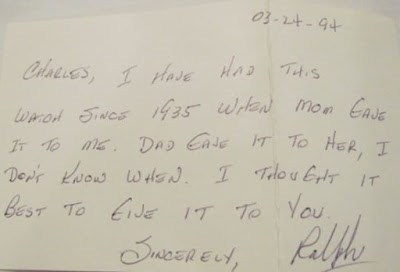 Charlie was named for both his grandfather and uncle Ralph so it makes sense that the watch would be passed to him. “Mom” would have been Charlie’s grandmother, Dessie (Church) Murphy.